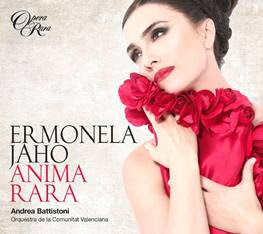 Over its 50 year history, Opera Rara has established close relationships with a number of singers and helped nurture their careers. The company gave Jaho her first studio recording opportunity in 2015 when she sang the title role of Leoncavallo’s Zazà which also marked Opera Rara’s first foray into verismo. In 2018, she returned to sing the role of Anna when Opera Rara presented the modern-day première of Puccini’s first opera, Le Willis, in its original one-act version. To launch its 50th anniversary celebrations at the beginning of 2020, Opera Rara presented Jaho’s debut recital at the Wigmore Hall with a programme featuring much of the repertoire heard on Anima Rara in addition to rarely heard songs by Bellini, Verdi Toscanini and Tosti. As The Independent noted: “Jaho’s sound is by turns light and transparent, or luxuriously full, and it builds to huge climaxes when the music demands. What she does with a 13-minute mad scene from Mascagni’s rarely-performed Lodoletta has shattering force. An astonishing debut.”

Opera Rara was founded by Patric Schmid and Don White in 1970 with a huge ambition: to document all Donizetti’s operas through recordings and, where necessary, new performing editions. Under Sir Mark Elder’s eight-year tenure, Opera Rara expanded its repertoire to include French grand opera, French operetta and Italian verismo works. Together with their new Artistic Director Carlo Rizzi, the company continue its mission to “rediscover, restore, record and perform” neglected operatic masterpieces with another Donizetti rarity in July 2021: Il furioso all’isola di San Domingo in an entirely new performing edition. For this opera, Opera Rara will work again with Russian soprano Albina Shagimuratova, the star of its award-winning recording of Rossini’s Semiramide and soon to be released recording of Donizetti’s Il Paria due out in early 2021.