HOW BLACK CATS WENT FROM BAD LUCK TO SYMBOLS OF DEFIANCE

Icons like the Black Panther Party logo, the “Sabo-Tabby,” and innumerable pieces of protest art go against the traditional Western taboo around the felines. 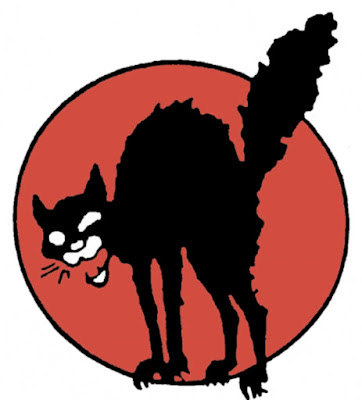 The superstition associating black cats with bad luck is rooted in the European fear of darkness. In Celtic mythology, the Cat Sìth stole the so uls of the recently deceased. During the Middle Ages, Devil-fearing Christians killed black cats because of their perceived proximity to the underworld. This fear even carried over to the Salem Witch Trials, when ownership of a black cat could be cited in charges of witchcraft. While pop culture still preserves this troubled legacy, underground artists have revived an alternative tradition that dates back thousands of years.
The pantheon of Ancient Egypt included Bastet, the goddess of domesticity and fertility who took the form of a black cat. Generations of Egyptian artists portrayed Bastet differently as her mythos evolved, to the point that crimes against cats were punishable by death. Some representations of black cats have been more in this vein, against the Western taboo that they are ominous or sinister. Feline disobedience works against the Western notion that nature serves humanity, and therefore disrupts a sense of order. The Industrial Workers of the World use a black cat (“Sab-Kitty” or “Sabo-Tabby”) as their icon for sabotage. Similarly, the Black Panthers named their party after an animal that only attacks when provoked. 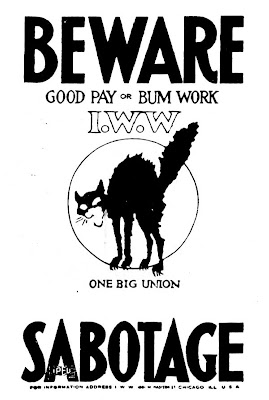 Why do analyses of black cat folklore avoid this connection? Perhaps it’s because the IWW and the Black Panthers are still considered unsavory by those above a certain tax bracket. In most political contexts, black cats are silent agitators advocating for redistribution of wealth or even the overthrow of the government. As the first industrial labor union to recruit women and BIPOC, the IWW (or Wobblies) challenged the tactics of more conservative unions like the American Federation of Labor. Socialist writer Ralph Chaplin created the original Sabo-Tabby at the apex of the union’s radicalism, when it was hated by predatory capitalists and targeted for police suppression and surveillance. Over time, the symbol foreshadowed bad luck for bosses but liberation for workers, and artists adapted its likeness for political cartoons and propaganda to suit localized actions.
The Black Panther logo was originally drafted in 1966 by Dorothy Zellner and Ruth Howard at the request of Kwame Ture (then Stokely Carmichael) to represent the Lowndes County Freedom Organization. The symbol evolved after the Party for Self-Defense incorporated in Oakland. Local artist Lisa Lyons popularized alternative designs of the panther on black-and-white flyers for rallies and marches, particularly for the freeing of Huey Newton and Eldridge Cleaver’s presidential campaign. Lyons helped transform the panther into a symbol of beauty and honor. One poster declares: “An attack against one is an attack against all. The slaughter of Black people must be stopped! By any means necessary!”
Although the Wobblies and Panthers both suffered sabotage by the US government, their ideologies have inspired insurrection among anarchists and environmentalists worldwide, and their legacies continue in the fights for labor reform and prison abolition. In the last month, stunning copyright-free tributes have emerged on social media. A recent illustration by Brazilian artist Gabriel Borjoize shows a black cat with the Gadsden rattlesnake — a libertarian symbol based on the American Revolution’s “Don’t Tread on Me” flag — between its teeth. This scene feels evergreen in light of anti-lockdown protests as well as the ongoing right-wing push for smaller government and reduced social welfare spending (outside of police and the military, of course). Another illustration by Canadian artist Michael DeForge asserts, “Cops Aren’t Workers, No Cops in Labour,” with a giant Sabo-Tabby chomping on a cop car. It remains to be seen whether these black cats are a sign of progress, or of a longer battle on the horizon.