“EMOTION AND LIGHT PUT TOGETHER”: AN LA PHOTOGRAPHER CAPTURES PROTESTS AND PEACE

“I needed to see Black people just being gentle and loving each other in front of me. Instead of another video of somebody being murdered,” says Alexis Hunley. 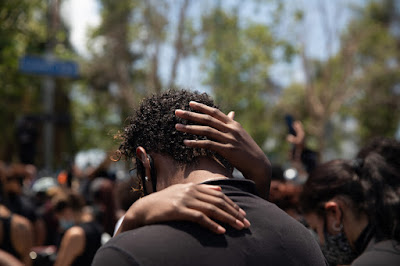 LOS ANGELES — Of all the moments photographer Alexis Hunley has captured over the past months, her favorite came into focus during a protest in Leimert Park. Hunley’s photo shows a parent bowed toward their child, the child’s hands reaching up to wrap around their head. It’s a “soft, tender moment,” Hunley said by phone, that reminds her of the people she loves.

After days and weeks documenting the protests that followed George Floyd’s murder at the end of May, “I needed to see that,” she said. “I needed to see Black people just being gentle and loving each other in front of me. Instead of another video of somebody being murdered.”

Hunley, who started teaching herself to photograph with a Canon 5D Mark 4 in 2017, has worked across portraiture, fashion, and editorial photography. Born in Los Angeles, she grew up moving around the US, but returned to the city when she was 17 years old and has lived here since. 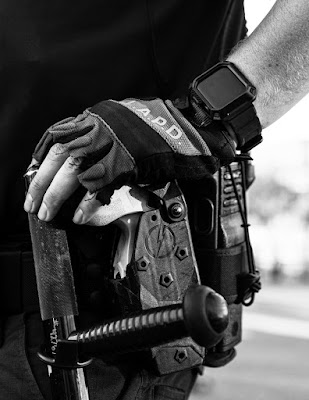 Alexis Hunley, As protesters chant dozens of officers stand by ready with hands on their weapons (May 27, 2020), Los Angeles, California

When local protests began in June, Hunley aimed to capture the full spectrum of actions and emotions in the community. Her photographs show the menacing lines of police and National Guards at protests in Downtown Los Angeles, as well as the pride of Juneteenth celebrations in Leimert Park, captured in dancing bodies and joyful color.

“We can be angry and upset and hurt and devastated but also find these moments of joy and love … And we deserve to see those images,” Hunley said. “We deserve to see Black people smiling. We’re more than our pain.”
Drawn to light, shadows, and contrasts, Hunley defines her style as a “blend of emotion and light put together.” This style, evident throughout her work, hits home in the photo of a man raising his fist in protest in front of City Hall, the prison-bar shadows cast against the building implicating it in oppression. Hunley uses the weight of vivid, carefully chosen details to tell an emotional story in her images, whether that story involves catharsis, joy, rage, fear — or all of the above.

“We need the balance; we need the entire story,” Hunley said. “Black people are not a monolith. We do not all live a single ‘Black’ experience. We live rich lives full of nuance and we deserve to be seen beyond just our Blackness.”
Hunley is “inspired and encouraged” by current work from fellow Black photographers like Devin Allen, Dee Dwyer, Lynsey Weatherspoon, Mark Clennon, and Stephanie Mei-Ling. Even from a distance, the intimacy in their work “makes me feel so much more connected to them and makes me feel less alone.” For Hunley, creating a sense of intimacy in her own recent work has become more intuitive as well. Because “in addition to showing what I’m seeing in other people,” the images are “a reflection of what’s going on within me.”

This work takes a physical and emotional toll, Hunley said. “Because I don’t show up just to document. I’m there protesting for the rights of my community,” as a Black queer woman. “I could be the next hashtag … I carry that weight and that understanding with me every time I show up with my camera.”

Hunley also contends with the urgent issue of privacy in her photos of the protests. She thinks critically about photographing people who are subjected to violence, weighing the desire to recognize activists against the potential danger of images being used to identify and target them. Hunley has based her own approach on a foundation of respect — talking to and getting permission from the people she photographs — and ensuring that none of the images she releases could endanger protesters. She is constantly aware of her audience, understanding that perceptions of her photos, once published, are beyond her control. 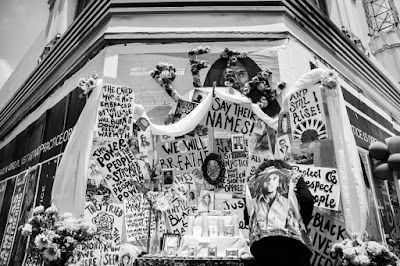 Because of this, Hunley is careful not to add to the “legacy of images that … depict Black pain and suffering in this voyeuristic manner, in almost this fetishizing way.” She is sensitive to the visual context in which images of Black people in vulnerable moments are perceived. “Controlling the narrative is everything,” she said, as an individual creator and in the broader context of media outlets. She added that the media have a responsibility to keep telling stories in Black communities and commissioning Black photographers to tell them. “Black photographers have been documenting our stories, they just haven’t been … given the recognition that they deserve. We’ve been here.”

Through the turbulence of this year, Hunley remains excited about the future and her evolving work. She plans to return to a long-term project, a visual narrative of sex workers that she hopes will tell their authentic stories and advocate for decriminalization. Hunley also anticipates creating “work that is even more emotional and more raw. I want to make people feel even deeper. I want people to be uncomfortable, I want people to cry, I want people to smile and laugh. I want to be hitting people hard.”

Hunley’s recent body of work is for her family and community. “It’s for every Black person everywhere, really,” she said. “Our shared Black experiences are just as important as the things that make us individuals. So, to Black people everywhere, I want you to know that I see you.”

“It’s my hope,” Hunley said, “that these images ensure that our history, this moment in Black history, is not lost. That we are seen, that our voices are heard. And my ultimate dream is that these images one day will help tell the story of how Black people around the world received the justice, the freedom, the peace, the recognition that we always deserve.”
https://hyperallergic.com/581491/alexis-hunley-la-photographer-protests-and-peace/?utm_medium=email&utm_campaign=D081320&utm_content=D081320+CID_e2598f232fce2296beba234dcd766a4d&utm_source=HyperallergicNewsletter&utm_term=Emotion%20and%20Light%20Put%20Together%20An%20LA%20Photographer%20Captures%20Protests%20and%20Peace