“If the world is to be saved, it will be the women who save it,” said the American Impressionist, who led a headstrong life as a woman abroad. 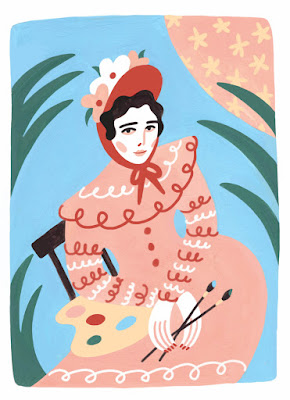 Speak to me of France. Women do not have to fight for recognition here if they do serious work.
—Mary Cassatt, American Impressionist in Paris
No woman has a right to draw like that.
—Edgar Degas, French Impressionist

Poor Mary Cassatt. She spent most of her headstrong life as an independent woman abroad, working alongside the bad boys of the Paris avant-garde, Degas, Manet, Renoir, Pissarro. But we tend to think of her as a lady artist who painted sweet mothers and babies, women in white dresses, small children. Soft. Sentimental. Feminine.

Not long ago I posted something about Cassatt’s rebelliousness on Facebook and an Ivy-educated friend was quick to respond, “Really? So interesting. You’d never know from her demure women!” But as I’ve written elsewhere, art can be dangerous, even when decorous. Often deliberately so.

And what we now sometimes see as saccharine — Impressionism itself, say — was shocking in its time, often for reasons that would surprise us. Take Cassatt’s mural “Modern Woman,” created for the Woman’s Building at the 1893 World’s Columbian Exposition in Chicago. Designed by MIT graduate Sophia Hayden, the Woman’s Building was an entirely female affair, with statuary by San Francisco sculptor Alice Rideout and caryatids by Enid Yandell, a student of Rodin. Cassatt, who’d been exhibiting in Paris for over 20 years, was in a different league from them. But she was eager to plant a foot back in American artistic soil. She also liked the idea of a building created by and dedicated to women.
Situated in a vast interior courtyard, Cassatt’s mural was monumental in ambition and size, about 60 feet long and 14 feet at its highest. It consisted of three panels, which show women pursuing (left to right) Fame, Knowledge, and Art. The largest scene, “Young Women Plucking the Fruits of Knowledge and Science,” filled a massive center lunette. Depicting contemporary women in an apple orchard, it’s ostensibly tame stuff. But the Tree of Knowledge of Good and Evil, and its fruit, appears in the Bible and in Western art for thousands of years with women depicted as the agents of man’s fall from grace. Cassatt’s painting doesn’t include men at all. Women pluck apples and pass them down to younger girls, one generation feeding another the wholesome fruits of their own labor.

If her repositioning of women as virtuous harvesters of the tree of knowledge was a gentle takedown, it still upset people. As Cassatt relayed in a letter, “An American friend asked me in a rather huffy tone the other day, ‘Then this is woman apart from her relations to man!’ I told him it was. Men I have no doubt are painted in all their vigor on the walls of other buildings.”

For most women in Chicago the Woman’s Building was a big hit. In the building’s six months of existence, more than 200,000 women saw Cassatt’s mural, including suffragists like Susan B. Anthony and her young supporter Carrie Chapman Catt, who would spearhead passage of the Nineteenth Amendment in 1920. Women praised it, but critics shook their heads. Cassatt’s subject, sniffed one, “seems too trivial and below the dignity of the great occasion.” When the building came down at the end of the fair, her mural was put in storage, and from there the only monumental artwork created by one of America’s most significant artists just disappeared.

America never knew what it had with Cassatt. Raised mostly in Philadelphia, in middling high society, Cassatt first studied art in Paris in 1865. By 1874 she was there for good, because Paris was the center of the art world. French opinion was what mattered to her. She’d lose most other things. In 1882, her beloved sister Lydia passed away in her sleep. Cassatt was bereft. She’d eschewed marriage for art, but had imagined her future as one with her sister, the two of them independent women abroad doing what they will. Her feminist interpretation of Eden — women relying on other women — was engraved on her heart.

Lydia was her companion and her older (by seven years) chaperone. Although Mary Cassatt could not in any case frequent cafés or nightlife venues as male Impressionists did, she could at least, together with Lydia, attend the theater, the opera, the Louvre. When she lost her sister, Cassatt lost friendship and freedom. She also lost a willing model.
One reason Cassatt painted so many scenes of women reading, knitting, drinking tea, and minding children was that these were the private spaces allowed her as a woman. By depicting such humble environments she elevated scenes of women’s work, pastimes, friendships, and occupations as worthy of high art. Others were unpersuaded, including her friend Edgar Degas who, on seeing her 1899 painting “Mother and Child (The Oval Mirror),” proclaimed it, “The greatest picture of the 19th century … It is the little Jesus and his English nurse.”

Degas was famous for his sarcasm, just as Cassatt was known for her hot temper and sharp tongue. They had regular falling outs, but admired and supported each other’s work. Degas had invited Cassatt into the Impressionist circle, but she was never his student, a myth that persists. They were collaborators and friends, assessing each other’s work, sharing enthusiasm for Japanese prints, bartering artworks and giving each other shit. She once complained to her friend Louisine Havemeyer, “You don’t know what a dreadful man he is, he can say anything.” Havemeyer shot back: “So can you.” 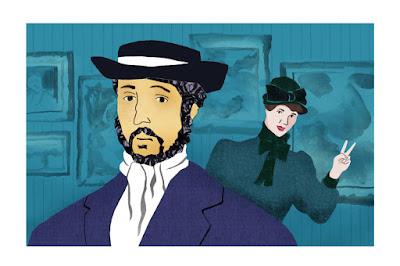 By the turn of the century, Cassatt’s reputation was thriving in France. In 1904 she was named a Chevalier of the Légion d’Honneur. American artists in Paris sought her blessing and advice, wealthy Americans sought her discerning eye and connections. But it was her brother Aleck, president of the Pennsylvania Railroad from 1899 to 1906, who was famous in America.

Cassatt loved her brothers and their families, but on visits to France they tried her patience. She wanted to be a good aunt and sister, going so far as to travel to Egypt with her brother Gardner’s family in 1910. Which was a mistake. Gardner took ill and died soon after his return. Cassatt was devastated by his death, as well as crushed by the masculine intensity of Egyptian art. Sick physically and spiritually, she could barely work.

Reenter longtime friend Louisine Havemeyer, who came for an extended visit in 1914. A wealthy widow, avid art collector, and powerhouse suffragist, Havemeyer was active in the Women’s Political Union in New York, headed by Harriet Stanton Blatch (daughter of Elizabeth Cady Stanton), and an ally of radical suffragist Alice Paul.

On long afternoon walks, Havemeyer and Cassatt discussed everything that was wrong in the world and how they would fix it. Women’s suffrage was essential. “If the world is to be saved, it will be the women who save it,” Cassatt agreed. I like to picture them hiking the hilly countryside in their big hats and long skirts. Cassatt thin and walking with a cane, Havemeyer energetic and sure-footed, both of them gray-haired and elegant, a living Impressionist picture. And like Impressionism, though offering a pretty picture, these dames were rebels cackling beneath their parasols.

In 1912 Havemeyer had thrown a successful double-billing, an El Greco/Goya show, to raise money for suffrage. She decided she’d do it again with a modern master: Degas. But she realized a suffrage exhibit without a woman artist was wrongheaded. (Yes.) She asked if Cassatt would join Degas. More than willing, Cassatt liked the idea of poking a feminist finger in Degas’s patriarchal eye.
Like her Women’s Building mural of 1893, Cassatt’s quiet paintings of mothers and children in Havemeyer’s 1915 suffrage show were unlikely incendiaries. But what was left of Cassatt’s family — Aleck and his wife and children, as well as Gardner’s widow Jennie and her two daughters, with whom she’d traveled on the fateful trip to Egypt — all disavowed the exhibition. They’d become fiercely anti-suffragist activists in a well-funded nationwide movement of self-proclaimed “Antis.” The extended Cassatt family marshalled their considerable finances against votes for women. And they attempted to thwart their sister and aunt.

The suffrage exhibition in New York depended on borrowed paintings from private collections. Cassatt’s family had much of her best early work, which they refused to lend. Other collectors followed their lead. Cassatt was forced to show mostly recent work, much of it in the mother and child vein. She’d begun to rely on the motif because it was easy to like and good for sales. One reason Cassatt is so well known for these later maternal scenes is that these made up much of America’s first public look at her work.

Philadelphia society, and much of New York society, followed the Cassatt family’s lead and boycotted the exhibition. These were the very people who would otherwise flock to such a show, bringing money and imprimatur with them. No matter. The show was a big hit, raised good money for women’s suffrage, and helped established Cassatt’s reputation in her home country.

The exhibition underlined the fracture within families and between women across America, where mothers and daughters, sisters, friends, and neighbors took stands in opposition to each other. It seems ironic today that there were women so determined not to vote that they protested the possibility, organized, and were in effect politically active in hopes of defeating political engagement by women. But the Antis were powerful players in the unfolding fight, Cassatt’s family passionately among them.

Cassatt, furious and hurt, lashed out. She rewrote her will, selling most of what she’d intended her nieces and nephews to inherit. This included both her own paintings and the work of friends she’d collected over decades. It was a final screw you to her family for not supporting women. Ellen Mary, her favorite niece, would have owned one of the great paintings of the 19th century, “The Boating Party,” now in the National Gallery of Art. Cassatt’s artistic vendetta is one reason so many excellent Impressionist paintings are in American museum collections. How nice for the rest of us.

The above essay is an excerpt from She Votes: How U.S. Women Won Suffrage, and What Happened Next by Bridget Quinn and has been published on Hyperallergic to coincide with the anniversary of the ratification of the Nineteenth Amendment on August 18, 1920.