MASTER PERFUMER SERGE LUTENS: 'I DON'T WANT TO BE RECOGNISED OR FAMOUS'

Some septuagenarians are content to slow down. Some, but not the fragrance master Serge Lutens. Although he enjoys some of the more domestic pursuits commonly associated with his age, he is still full of adventure, ambition and vitality. Originally, we were scheduled to meet at the Paris Ritz, Lutens' usual home-away-from-home, but the grand hotel is closed for refurbishment, so we meet instead at the Raphael Hotel, which fits his fastidious criteria. 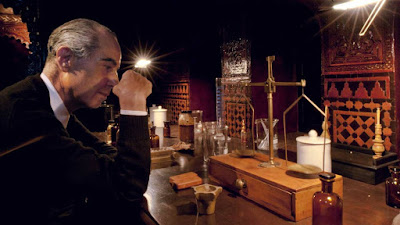 This sense of discernment, so apparent in Lutens' fragrances, comes through, too, in his appearance – a diminutive figure, he sits neat as a pin in a black suit with pencilled-in eyebrows and slicked-back grey hair. A slight loss of hearing is one of the physical concessions Lutens appears to have made to ageing, although mentally he remains nimble and inquisitive.

Those who have seen Brad Pitt's narrative non sequitur for Chanel No 5 will know that the world of perfume is one in which pomposity can be absolute, while exclusivity is simply a marketing device. At the other end of the scale, 15 minutes of fame now seem to come with a fragrance deal thrown in. Lutens' explanation that he does not label himself a perfumer or fragrance-maker reveals that his approach to his craft is philosophical rather than commercial. Each of his creations represents a complex communiqué – a message in a bottle, if you will.
Born in Lille in 1942, Lutens was separated from his mother at a very young age. Raised instead by foster parents, the lack of a maternal figure had a profound effect on him. "I was born in the midst of the Second World War," he says. "At the time, my mother was married and it was a complex situation. She was unfaithful to her husband."
"My dad is not German," he jokes. "Let me just be clear about that. But my mum had to give me up because if she hadn't, the laws at the time meant she would have been punished as an adulteress. She did it in order to protect me and protect herself. My mum didn't abandon me, but it means that I didn't see her that much and I didn't have a motherly character in my life. My personality was influenced by that."

Lutens has spoken previously of his "blurred identity", partly influenced by his illegitimacy. It is a subject that he has only spoken of in a veiled way before, but in person he shrugs it off. "It's just a normal story," he says. "All these things are seen through the light of your own experience."

"All my life I went from one foster family to another, and this great instability provided a great opportunity for me to be able to work on myself, to write life in a way that wasn't planned originally."

Lutens talks with great energy and passion, even though at times his opinions seem contrary. On the one hand, he talks dispassionately, almost disparagingly, about people who declare their work a passion, but then declares that if he did not create he would die. To him, the message is important, the medium only secondary: "The passion of fragrance does not exist. You go inside something, you're pulled to something you can't resist despite yourself. But that's not a passion for a fragrance; it would be ridiculous to call it that."

In one breath Lutens states, "You have to create your own happiness, we are the key to our own happiness," while in the next he says, "It's very dangerous to believe in such a cliché". What he means, of course, is that happiness should not be confused with material wealth, beauty or success. "Even if society thinks you're a mistake, you need to come to terms with it," he says without sadness. "Maybe be happy about it, rejoice. Sing it as a song, clothe it, perfume it and close it to yourself."

If Lutens is not chasing success for its own sake, there must be a deeper force that has driven him over a career of six decades. A dreamer at school, his teachers at Lille's École Montesquieu realised that he was a gifted storyteller but said that he was "on the moon" for his lack of attention. "When I was in school, I was maybe a little autistic," he says. "I was using more intuition, instincts rather than knowledge."

At 14, Lutens was given a job in a beauty salon in Lille. "I became a hairdresser without actually wanting it; it was an absolute nightmare." Although he says he would have preferred to be an actor or even a horticulturist, within a few years he had established an aesthetic of his own – strong eyeshadow, ethereal skin and shortf hair plastered down – and took to making-up and photographing his female friends.

Called up at 18 to serve during the Algerian war, on his return to Lille in 1962, Lutens decided to leave his home town for Paris. Here, stints at hairdressing and as a photographer led to a role in make-up artistry for French Vogue, beginning with that year's Christmas issue. Working with photographers such as Richard Avedon and Irving Penn, he was soon hotly pursued by titles such as Elle and Harper's Bazaar, while in 1974 Diana Vreeland, the legendary editor-in-chief of US Vogue, declared his work the "revolution of make-up!".

In 1967, he was asked by Christian Dior to launch a make-up line, for which he formulated products and created campaign images – leading the company's creative vision. Lutens has said previously that by the late Seventies he was "a little tired of being labelled Monsieur Dior" and decided to approach Shiseido in 1979. At that time, the Japanese cosmetics group was hugely important in its own market but had yet to make an impact globally. With Lutens' assistance, the brand became one of the most dominant of the Eighties.

After two years with Shiseido, Lutens conceived his first perfume, Nombre Noir, which "burnt a hole into everyone's collective memory", according to Chandler Burr, former New York Times perfume critic, in his book The Emperor of Scent, which chronicles the work of 'nose' Luca Turin. Turin, for his part, classifies Nombre Noir "just too wonderful for words, one of the five great perfumes of the world". No longer in production, but still a favourite among fragrance-lovers, a 60ml bottle is listed on eBay for $999 (£614) at the time of writing.

Continuing to make fragrances for Shiseido, assisted by the company's in-house nose, in 1992 Lutens established Les Salons du Palais Royal – a former bookshop in Paris's Jardins du Palais Royal, converted into a house of perfume. Originally intended to launch his second Shiseido scent, Féminité du Bois, its inaccessible location was apparently chosen by Lutens to "attract a clientele of connoisseurs, not casual customers".

At the turn of the millennium, Lutens branched out, maintaining the backing of Shiseido, to create his eponymous brand of perfume and make-up, neither of which came about quickly. "Sometimes it takes 12-17 years [to create a new perfume]," he says. "Sometimes it takes one year – that is the minimum – and then I will say that's it. Then I'm not interested any more, I've said what I had to say."

Although the inspiration for each creation comes from a different source, Lutens believes that through his work he is "trying to determine an identity, find a new language". He shares his philosophy of scent and memory that underpins all his work: "It is an exercise of the memory, of your sensitivity. By the time you turn seven, this is what we call in French the reasonable age, you are going to, so to speak, record 750,000 odours in a box. Your nose is not made by these fragrances, but is there to assess whether you like, or you love, or you hate. These odours are going to create an interlace of paths going in all directions. From these odours you're going to smell millions more, and only say 'I love' when you recognise something, not discover something. What you can recognise is nothing else but yourself. So around this [identity] I am trying to make the perfume recognisable. If I am using wood I want the perfume to smell like wood."

Indeed, wood marks the beginning of Lutens' fragrance journey. In the past he has attributed his first trip to Marrakech in 1968 as his moment of epiphany. At a small wood-workers' studio in the souk he found a piece of cedar, "a quite attractive and a captivating type of wood; tasty, very sweet but also musky". So overwhelmed was he by the scent that Lutens knew he had to make a perfume from it.

The perfumer now calls Morocco his home, where he can "step back and have distance" from the demands of work, travelling to Paris only when necessary. Refurbishing a home in the city's medina has been Lutens' project for many years, as well as creating a jungle of a garden in which to stroll when he feels well enough.

Not an ostentatious man, he lives a relatively sparse existence, believing that his greatest luxury is being able to say he can live without "almost everything, except perhaps for friendship". Originally sold only through the Palais du Royal, his creations are now slightly more widely available, with selected stockists including specialist perfumery Les Senteurs and Harvey Nichols. The complexity of the blends, the narrative behind each scent and the formulation of cosmetic means that this is a brand that appeals to aesthetes. "Perfume is just molecules," he says in his contradictory way. "The best perfume-maker was the wind, rivers and pollens…"

Lutens does not believe perfume should be accessible, nor that it should be worn every day. To him, if you wear perfume, "you are giving yourself arms, weapons. Transforming a weakness into a strength, protecting yourself by making a stand. This is the main purpose of my perfumes – strengthening your inner self". Indeed, he explains that he only wears his own fragrance of choice, Cuir Mauresque, very rarely: "I wear it because it makes me feel good on this particular day".

Any attempt to talk about fragrance in the familiar lexicon of base notes, extracts and ingredients is brushed away by Lutens. "I don't know what I am really, but by creating my own weapons and talking about them I provide them to you. Some people are going to recognise my fears. I do not want to be recognised or famous, I don't really care about having my name in big letters, the point is to recognise who you are. All I'm talking about is identity – that is all I've been talking about my whole life."