Isensee has gone from being a dutiful geometric abstractionist to defining his own trajectory, and gaining a verifiable freedom for himself. 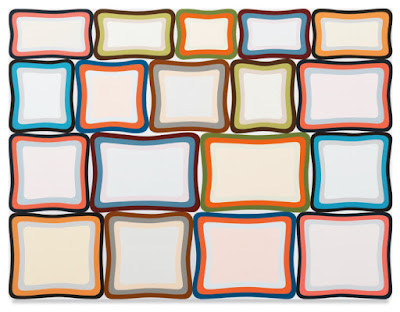 Starting around 2006, when Warren Isensee began showing at Danese and later Danese Corey, his paintings consisted of organized bundles of straight lines, in parallel or concentric formations. Occasionally, he broke up the rigidity with a grid of irregular rectangles.

His pole stars were Frank Stella and Richard Anuskewicz, which resulted in geometric paintings with a trace of the optical. I always visited Isensee’s shows but I never felt a need to write about them. They were sturdy but not particularly exciting examples by an artist who was working with a known vocabulary but not yet made it his own.

All that changed with Warren Isensee, his current, debut exhibition of paintings and drawings at Miles McEnery Gallery (July 16–August 28, 2020). In these works, he continues to use concentric bands as a key component, but he seems to have banished the straight line. His paintings are full of pulsing, sensuous, rubbery, bloopy, cartoony forms that evoke quatrefoils, explosions, mandalas, flowers, and gears. “Prickly Goo” (oil on canvas, 60 by 60 inches, 2020), the title of one of the paintings in the current exhibition, pretty much sums up what we are looking at. 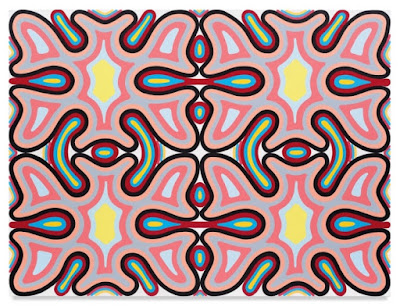 Still committed to repetition and tight organization, Isensee deploys his wavering forms to divide the canvas into quadrants. And here is where his current works get interesting. Since the irregular shapes neither completely fill the quadrants nor perfectly abut their adjacent, mirroring forms, there are ample leftover spaces that the artist fills with almond-shaped and eye-like units, lozenges, boomerangs, and teardrops. This use of interstitial space enables Isensee to juxtapose two or more sets of colors to distinguish the larger concentric groupings from the smaller insets, and the smaller groupings from each other.

These disparate sets of color add a clanging yet, paradoxically, soothing optical note to the paintings, setting up an engaging friction between repetition and difference.

In his earlier work, when Isensee set two different color schemes against each other, one configuration tended to be black and white. By juxtaposing different color sets, Isensee becomes something he never was before: an adventuresome colorist.
If Stella, Anuskiewicz, and other stripe painters were presences in Isensee’s earlier work, it is interesting here to see him cite Paul Feeley (1910-1966), whose work was exhibited regularly during the first half of the 1970s, but basically neglected until the end of the 1990s. During the height of his career, which lasted barely a decade, Feeley painted emblematic, concentric forms, usually in clusters. In “Out of Touch” (oil on canvas, 24 x 24 inches, 2020), Isensee fits together Feeley’s well-known motifs to arrive at a composition and color palette that are all his own.

His allusion to Feeley called to mind the work of two of Isensee’s contemporaries, Chris Martin and Philip Taaffe. During the1980s, while the art world was hot for the Neo-Expressionists, Martin and Taaffe incorporated Feeley’s motifs into their work while pursuing their interest in the hallucinogenic strain of optical art. Eventually, each of them arrived at something all their own. When and how this happens cannot be predicted.

This is the territory that Isensee has entered on his own terms. He has gone from being a dutiful geometric abstractionist to someone who, having absorbed all of his affections and historical precedents, has started to define his own trajectory, and to gain a verifiable freedom for himself. This is what is exciting to see.
What makes me even more enthusiastic about the current exhibition, which is selected from work done over the past three years, is the manner in which he has implemented incremental changes and expansions over time. One of the earliest paintings in the show, “Pillow Talk” (oil on canvas, 40 by 52 inches, 2018), is a grid of different-sized, rounded rectangles made of different-colored concentric bands. I thought of it as a gentle breakthrough, as compared to the square “Deep Shit” (oil on canvas, 48 by 48 inches, 2018), in which he places a concentric, black-and-white heraldic X in each quadrant with the leftover spaces fitted out in concentric forms of off-red, yellow, and blue bands.

After that, Isensee began opening up different possibilities for himself, and pushed his work into a new territory. In “Wild Kindness” (oil on canvas, 42 x 56 inches, 2019), you can see a compositional connection to “Deep Shit,” but its four six-petaled forms, while symmetrical, are also more inventive and eccentric.

The other big change is in the use of color. Muted tones press against darker hues, adding a percussive optical element that is more modulated and all-over than the clash between black-and-white and primary colors that we see in “Deep Shit.”

A couple of things happen because of this. The composition doesn’t settle into the stability of a square made up of four identical forms held in place by smaller insets. By presenting a dominant shape whose outer edges are not immediately apparent — as he does in “Black Magic,” which might be the best painting in the exhibition — Isensee shifts the tension from the four corners to the interior, expanding form as it presses against the canvas’s borders. The winding black line Isensee uses to define the contours of some forms but not others adds another striking element into our visual experience.

Finally, it is also possible to detect a figural current running through “Black Magic,” with a suggestion of eyes, nose, and mouth, which calls up a passing association with Karl Wirsum, of all people. The ability of Isensee’s painting to court a figural association while remaining decidedly abstract is just one of the many strengths of this coloristically bold, visually jarring work. Moreover, it bodes well for the future.