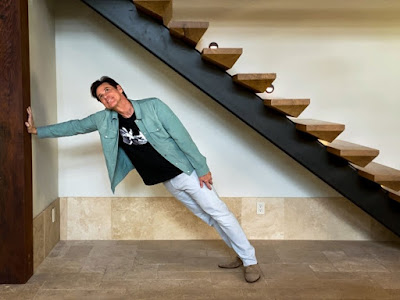 Jim Carrey’s new book, “Memoirs and Misinformation,” is a strange work of autofiction, satirizing Hollywood’s self-absorption. He is photographed remotely via Facetime on an iPad from his home. (Jay L. Clendenin / Los Angeles Times)

In Jim Carrey’s new semi-autobiographical novel, “Memoirs and Misinformation,” there are flying saucers and a fire-bombing on Rodeo Drive, apocalyptic fires devouring Malibu and a mega-budget Hungry Hungry Hippos movie written by Kenneth Lonergan. One moment, “Carrey” dreams of strangling his late mother; the next, he pines for Renée Zellweger (“his last great love”) and challenges Nicolas Cage, a man “whose artistic bravery had always given him courage,” to a jujitsu duel. (Warning: Cage fights dirty.)

Cowritten with novelist Dana Vachon in the third person to capture what Carrey calls the “wholeness that has an infinite knowledge of all of its parts,” “Memoirs and Misinformation” is, like the twisted political drawings Carrey posts on Twitter, entirely its own thing. A satire of Hollywood’s self-absorption coinciding with the end of the planet, none of it is real ... except when it is. And given the extreme circumstances that have marked Carrey’s life, it’s sometimes difficult to sort out fact from fiction.

When Sonny Mehta, Alfred A. Knopf’s late publisher, bought the book several years ago, he wrote Carrey a note, congratulating him for steering clear of “‘There is a town in North Ontario’ bull—,” referencing the opening line from Neil Young’s autobiographical song “Helpless.” “Memoirs and Misinformation” is a deconstruction of the standard-issue show biz chronicle. There aren’t any fun anecdotes about the making of “Dumb and Dumber” or “Ace Ventura: Pet Detective.” Instead, there is a wholly strange work of autofiction, laden with symbolism and metaphor, sometimes beautiful, sometimes tragic, often inscrutable. 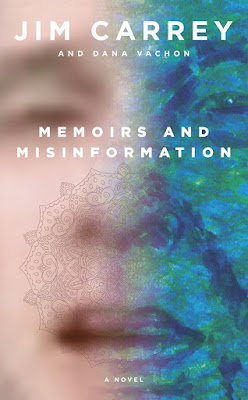 Book jacket for “Memoirs and Misinformation” by Jim Carrey and Dana Vachon.(Knopf)

In a recent FaceTime call — with Vachon first joining, followed by another good hour one-on-one — Carrey, 58, says he didn’t want to write a memoir that dryly cataloged his life. “You can tell a lot about somebody through their fictional choices,” he says, with Vachon adding that they wanted to use heightened reality to create a “super-position of truth.”

That reality, as you might expect from Carrey’s career of infiltrating fiends, clowns and sad men trying to stave off loneliness, naturally tilts toward the surreal — a tone consistent with the experience of speaking with Carrey himself. For instance, when the conversation turns to Las Vegas, a place the book’s “Jim Carrey” fears he’ll wind up “when he’s old, jowly with bleached teeth and hair plugs, whoring for the bingo crowds,” Carrey describes his own visits to Sin City in feverish prose that surpasses the book.

“Whenever I go to Vegas, I go crazy,” Carrey says. “The only way I can live there is if I put all the faucets on scalding hot so the room becomes some sort of terrarium for tropical plants where literally you can’t see out the windows after awhile. They’re just bleeding with sweat. It’s what I imagine living on Mars is going to be like. ‘I don’t give a damn how you think you’re controlling my environment! I’m going tropical!’ I might have to break a window at some point to stick my head out.”

“Memoirs and Misinformation,” which Carrey describes as “burning myself to the ground and telling you that’s not who I was anyway,” began its life eight years ago when Vachon walked into Carrey’s West Village artist workspace, checked out his paintings and thought, “There’s a story here.” In one corner, there was a depiction of Malibu engulfed in flames. In another, a self-portrait had been slashed. Vachon told Carrey that the scene reminded him of Aeneas standing in Juno’s temple, lamenting the hardships of his life.