ADVERTISING
Venice (Italy) (AFP)
The Venice film festival will present its coveted Golden Lion award Saturday after a competition marked by facemasks and missing stars but billed as a relaunch of global cinema, bruised by the coronavirus crisis.
Throughout the 11 days of industry schmoozing and movie watching on the glitzy beachfront Lido, elbow bumps replaced handshakes, theatregoers were masked and the red carpet eerily devoid of screaming fans.
The 77th edition of the "Mostra" festival has taken place against an unprecedented backdrop, in a year where theatres have been closed, film sets shut down and moviegoers forced to embrace streaming video at home instead, during months of coronavirus-imposed lockdown.
Many directors saluted the festival's organisers for going ahead with the event.
"The Venice Film Festival has given us the opportunity and the privilege to start dreaming again," Italian director Emma Dante said in Ciak magazine, distributed daily at the festival.
Leading contenders among the 18 films vying for the top prize include Michel Franco's "Nuevo Orden" (New Order), a dystopian view of Mexico, Gianfranco Rosi's documentary "Notturno" shot on the borders of Syria, "Quo Vadis, Aida?" by Bosnia's Jasmila Zbanic about the 1995 Srebrenica massacre and "Dear Comrades!" from veteran Russian director Andrei Konchalovsky about the 1962 shooting of striking factory workers in the USSR by the army.
The last entry in the competition lineup to premiere was the much anticipated "Nomadland" by US director Chloe Zhao, starring Frances McDormand -- one of the few films from the United States at the festival -- which received sustained applause during its earlier press screening.
- High-profile 'test' -
Normally attended by more than 10,000 film industry executives, critics, journalists and moviegoers, the Venice festival was the first major international movie competition to go ahead after others around the world, including its main rival, the Cannes Film Festival, were cancelled.
Festival director Alberto Barbera called the event "a sort of test" for the film industry, which is slowly regaining its footing, with some production resuming and cinemas reopening, even as Covid-19 cases continue to rise in many parts of the world.
In Italy, the festival was also viewed as a sign of hope and normalcy for the first country in Europe to be battered by the global crisis.
Nevertheless, big-budget blockbusters that have premiered in Venice in years past were missing, as was the bevy of Hollywood A-listers, who have fans screaming for autographs on the sidelines of the red carpet.
Instead, the 2020 version was decidedly low-key, with about half the usual number of attendees, fewer films and seating in theatres that was staggered to respect social distancing.
Masks were mandatory, hand sanitiser bountiful, temperatures were taken on entering the festival grounds and ubiquitous red signs warned attendees to respect the anti-coronavirus measures.
Still, organisers said the scaled-down event offered a diverse panorama of cinema today, with 50 different countries represented in the lineup.
Of the contenders for the top prize, eight were directed by women, which some hope reflects a new direction for festivals after criticism in past years over a lack of gender diversity.
- 'A miracle' -
Brad Pitt, Meryl Streep and Scarlett Johansson were among those to have supplied the celebrity panache at last year's festival.
But ongoing travel restrictions -- especially a travel ban from the United States into Europe -- mean most Hollywood big names were no-shows this year, along with actors and directors from China, India and South America.
However, Cate Blanchett, as jury president, provided some much-needed star power, telling an opening night audience that the festival's launch seemed "some kind of wonderous miracle."
"The way is uncertain, but tonight is a beginning," she said.
As well as Blanchett, the judges comprise US actor Matt Dillon, Austrian director Veronika Franz, British director Joanna Hogg, Italian writer Nicola Lagioia, German director Christian Petzold and French actress Ludivine Sagnier.
Last year, "Joker" by US director Todd Phillips took home the Golden Lion, while Roman Polanski won the runner-up Grand Jury prize for "An Officer and a Spy."
© 2020 AFP


Soldiers, accountants, children … Luke Holland persuaded elderly Germans to account for what they did under Nazi rule, and the air of shrugging unrepentance is damning 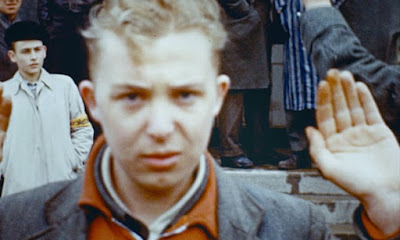 One of those interviewed in the film, as he was during the second world war. Photograph: Mary Cybulski/77th Venice International Film Festival

Heinrich Schulze is a kindly-looking old man who lived as a child near the concentration camp at Bergen-Belsen in Lower Saxony, Germany. In the course of Luke Holland’s quietly searing Final Account, Schulze returns to the old family farm to point out the hayloft where a group of escaped prisoners had once taken shelter. The escapees were starving and had begged him for some food. But then the guards came and retrieved them, which was of course very sad. Under further questioning, with a sheepish shrug, Schulze admits that yes, the prisoners were recaptured because he himself called the guards. As to what became of them after that? “Oh,” Herr Schulze scoffs. “Nobody knows that!”

Round them up and bring them out: the bystanders and functionaries, the children who pitched in and the adults who turned a blind eye. Holland, a British documentary-maker, spent the last decade of his life with these straggling survivors of history, those with first-hand experience of the Nazi regime, and the results are damning; the testimonies chill the blood. Monsters, Primo Levi once wrote, are always aberrations. But the small men who watch from the sidelines and occasionally lean in to lend a hand: these are the real danger. They’re even worse than the monsters.
Holland names these functionaries – and therefore it’s important that we do the same. Margarette Schwarz recalls having her teeth filled and straightened by the inmates of Dachau. (“They were nice prisoners,” she says.) Herman Knoth explains that the Waffen-SS were seen as the peak of the nation (“Not just physically. Spiritually, too”). Even today, half-deaf and doddery, Karl Hollander admits that he still honours Hitler and can’t bring himself to blame him. He feels that on balance the Jews should not have been killed. They should have been driven out of the homeland instead.

While few of Holland’s other subjects are as unrepentant as Hollander, their airy defences sound depressingly similar, to the point where one half-suspects witness tampering on an industrial scale. Either they knew nothing about what was really going on or – if they did – they bear no responsibility whatsoever, given the fact that they were frontline soldiers, or humble accountants, or excitable members of the Hitler Youth. A precious few (Hans Wierk, Kurt Sametreiter) call out these lies for what they are, insisting that, yes, everybody knew what the camps were for; you could smell the bodies burning from 2km away. The others, meantime, are keen to explain the ways in which their very presence boosted the local economy. The camps, it was said, helped the butchers, the bakers and the grocers as well. Everyone benefited, except for the people inside.
Holland was diagnosed with cancer while working on this project and he died in June, shortly after its completion. He leaves behind a simple, unadorned study of everyday evil, one which balances eye-witness accounts with archive footage and wintry location shots of mountains, forests and leaf-blown railway tracks. Explicitly, his film shows how a hundred shades of grey combine to make a darkness. Implicitly, it warns that it could well happen again.

Kurt Hollander, it turns out, is not the most purely worrying inhabitant of Final Account. That dubious honour falls to the unnamed, pixelated young student who berates elderly Hans Wierk for being ashamed of his history and says that the old man should be more worried about an Albanian immigrant mugging him than anything his country may or may not have done long ago. Sat at a table, listening to this diatribe, Wierk is distraught and close to tears. He shouts: “I ask only this of you. Do not let yourself be blinded”; the past speaking to the present in a hoarse, failing voice.