HOW MUCH RODIN IS TOO MUCH?

Without diminishing the significance of Rodin’s achievements, it is worth asking how many resources should be devoted to this ongoing production of his works. 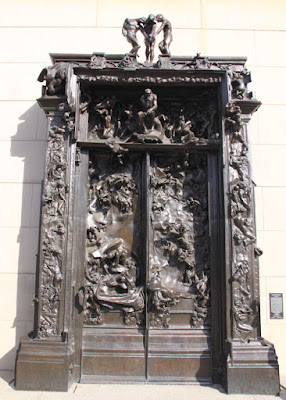 Selling collection objects has always been the third rail of museum politics. Deaccessioning works outside of a narrow set of guidelines can lead to censure from professional associations, and even instances that fall within acceptable criteria (including using the funds for further acquisitions) can be highly controversial. But — with up to a third of US museums potentially unable to reopen — there are signs that the COVID-19’s devastating impact on cultural institutions might change that calculus, given the Association of Art Museum Directors’ (AAMD) announcement that it will temporarily relax strictures around deaccessions. France’s Musée Rodin seems to have found a unique solution, at the same time retaining works from its collection and selling them, reportedly by producing additional bronze casts of Auguste Rodin’s sculpture.

This is not new, said the museum. Their editions are nothing unusual, since this has always been how the non-subsidized state museum has been supported. Rodin willed not only extant works but also the right to continue producing casts to the French state; the museum, inaugurated two years after Rodin’s death in 1917, was tasked with overseeing both aspects of the bequest. Sales of editioned examples, rather than direct government funding, provide a core revenue stream — though one that requires a delicate balancing act between affirming reproducibility and certifying rarity.
Attempts to chase down the voluminous iterations of Rodin’s key works bring to mind the infinite regress of artist Josiah McElheny’s 2007 array of hand-blown glass vessels, Endlessly Repeating Twentieth Century Modernism. For sheer multitude, the many versions of “The Thinker,” varying in size and degrees of authority, can hardly be surpassed. But the relatively limited proliferation of Rodin’s 1880-1917 “Gates of Hell” is more suggestive. Since the plaster remained uncast at the time of his death, there is no definitive lifetime version, though two were created the following decade. Upon viewing a film documenting the production of the fifth posthumous cast for a 1981 National Gallery exhibition, Rosalind Krauss provocatively speculated about “witnessing the making of a fake,” while also emphasizing the general framework of Rodin’s bequest — and the film’s narration does indeed highlight the use of new materials and techniques.

What major Rodin collection would be complete without this crown jewel? The fifth “Gates,” cast with backing from Rodin collectors Iris and B. Gerald Cantor, wound up as a centerpiece of the Cantor Arts Center at Stanford University. A new version, acquired by the Carlos Slim Foundation, made its 2016 debut at the Soumaya Museum in Mexico City, which has been billed, like the Cantor, as one of the largest collections of Rodin works in the world. In an essay for Daniel McClean’s Artist, Authorship & Legacy (2018), Penelope Curtis intriguingly suggested that a 2014 “Gates” sale “to a Mexican buyer” (presumably one and the same) provided key funding for a major refurbishment of the Musée Rodin completed in 2015.

During his lifetime, Rodin, like other sculptors, displayed many of his works as plasters, with the forms realized in marble or bronze as interest dictated. Those were distinct from additional copies, known as foundry plasters, used to make the molds for bronze casting. Since initially there were no official limits, versions of certain works multiplied, including “The Thinker,” “The Kiss,” and “Walking Man.” For their posthumous casts, the Musée Rodin limited editions to 12, with this practice eventually codified into French law via a 1993 decree specifying editions of eight, plus four more artist’s copies, numbered I-IV, that can only be distributed to cultural institutions (rather than sold on the open market).
A 1919 scandal, “L’affaire des faux Rodin,” gave early indication of potential challenges posed by reproducibility — with Charles Émile Jonchéry, who had worked for Rodin, participating in the creation of unauthorized casts. Even more remarkable, however, was a recently concluded court case against Gary Snell and a closely associated firm, Gruppo Mondiale, that lasted almost two decades.

Many of the Gruppo Mondiale casts bore strong connections to Rodin, since Snell managed to acquire a series of foundry plasters held by the Rudier Foundry. But a complicated deal involving those plasters plus bronzes cast in Italy during 1999 and 2000 went wrong in all kinds of ways. The works were supposed to form a core collection that would transform the MacLaren Art Centre, in Barrie, Ontario, Canada, into a major art destination. When a loan exhibition made its debut at Toronto’s Royal Ontario Museum in 2001, however, the Musée Rodin denounced the examples on view as fakes. It also turned out that the proposed donation was part of a complex tax avoidance scheme that led to over a decade of legal action in Canadian courts, and nearly took the MacLaren down with it.
The prosecution of Snell and his business partners in the French court system lasted even longer, commencing in 2001 and dragging on for 18 years. While France extended copyright duration in 1997, from the author’s lifetime plus 50 years to life plus 70, Rodin’s work was out of copyright by any measure. Yet, unlike the United States, where the very limited moral rights protections afforded by VARA expire with an artist’s death, in France they are perpetual, and on that basis the Musée Rodin has continued to claim authority to create genuine multiples and denounce others.

One aspect of the case turned on a provision of the French tax code requiring copies to be clearly marked as reproductions. In fact, at least some of the Italian casts inaccurately carried the Rudier foundry mark. Although the case seemed to come to an end with a 2014 determination that French courts had no jurisdiction (since the activity mainly took place elsewhere) it somehow came back to life in 2016, resulting in 2019 convictions against Snell and a French associate.

At the turn of the 20th century, when Rodin’s atelier production was at its peak, many museums were still filled with displays of a different kind of plaster cast: replicas of classical examples that were, in turn, often known through Roman marble copies of lost Greek bronzes. Duplicates of canonical works were preferred by many over scattered assortments of lesser originals. Despite changing attitudes, continued Rodin production has facilitated something similar — museums around the world that boast of extensive Rodin holdings apparently are soon to be joined by one in China.

Without diminishing the significance of Rodin’s achievements in the context of European modernism, it is worth asking how many resources should be devoted to this ongoing production, and whether some 21st-century efforts could be focused on artists who haven’t been dead for over 100 years.
And one more wrinkle: In 2014 the Baltimore Museum of Art announced plans to release a 3D scan made from their example of “The Thinker” (a work long out of copyright). When it never materialized, artist Cosmo Wenman went in pursuit of the scan. Having evidently gotten cold feet, the Baltimore Museum told him that access would depend on permission from the Musée Rodin. After the latter refused, Wenman made a formal request for 3D imaging from the Musée Rodin itself and obtained a 2019 opinion from the CADA (La Commission d’accès aux documents administratifs) that their scans, as administrative documents associated with a state institution, should be accessible upon request. The museum nonetheless held fast, and he filed a lawsuit that is still ongoing.

As I discuss in a forthcoming book on intersections between artistic authorship and copyright, the issue of posthumous production involves a complex interplay of explicit legal authority and consensus-driven artworld conventions. New editions potentially expand audience access to certain art, but that idealism is difficult to separate from obvious financial motivations. Even if the obsession with distinguishing between authentic works and the pretenders is meant to protect an artist’s vision, certain “investment grade” artists are the focus of vastly disproportionate attention and resources.
In the US at least, standard museum accounting practices leave the appraised value of collection artworks off their balance sheets — since they are, under normal circumstances, not supposed to be tapped as assets. One of the few exceptions is when the money realized from a sale is used to acquire other art. Although the Baltimore Museum has yet to release its 3D scan, the museum has (along with SFMOMA) moved forward with announced plans to reorient its collection by selling a few examples by canonical figures in order to diversify its holdings.

While widespread liquidation of public resources into private hands would be disastrous, it is striking to see what both the Baltimore Museum and SFMOMA were able to  acquire with these targeted acts. It is therefore an interesting irony that this more inclusive agenda is directly tied to extravagant speculation centered on a narrow band of artistic activity. As museums of modern and contemporary art attempt to chart a way forward, ideally that future will include not only far greater diversity, but also the courage to concentrate on individualized collections that are not measured against an amorphous ideal of what any museum ought to own.