To raise awareness and funds for the critically endangered gorilla species, public artists Gillie and Marc Schattner have created a massive sculpture of the animal that arrived this week in Hudson Yards’ Bella Abzug Park. Titled King Nyani, Swahili for gorilla, it’s the world’s largest bronze gorilla sculpture and can fit two to three humans just in its hands.
Gillie and Marc have dedicated a large part of their career as artists to bringing attention to the world’s endangered species through their Love The Last project. Two years ago, they brought a 17-foot-tall sculpture of three rhinos to Astor Place and Downtown Brooklyn. As a protest of the sale of rhino horns, it depicted the last three Northern White Rhinos Najin, Fatu, and Sudan. 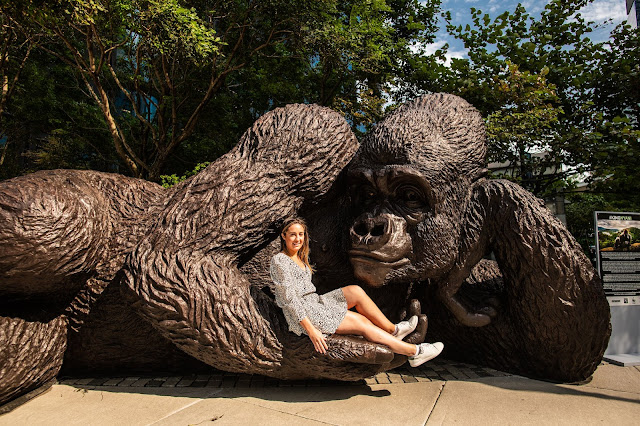 And the artists get passionately involved in their projects. King Nyani is based on the head of a family of silverback mountain gorillas that Gille and Marc encountered on a trip to Uganda. They say they were moved to tears watching the gorilla exhibit empathy and kindness as opposed to the “scary” image so often portrayed.

“It was beautiful watching the silverback interacting with his family. He was so gentle and loving and clearly cared deeply for his family,” said Marc. Gillie added, “We knew we had to let the world know about this loving and gentle side of gorillas. They are often so misunderstood and thought of as scary and dangerous animals. But if they were able to see the silverback, maybe they wouldn’t be so scared.”

But due to illegal poaching, war and deforestation, there are only about 1,000 mountain gorillas and fewer than 3,800 eastern lowland gorillas left in the wild. “We couldn’t sit back and do nothing when these amazing creatures that are genetically so similar to us are in danger,” said Marc.
Inspired by the movie scene where King Kong grabs the woman in his hand, King Nyani’s hand is open for visitors to sit and interact with him. “We wanted to create a sculpture where the public could really get close to the silverback, both physically and emotionally. Being able to sit in his hand and look up to into his gentle face we hope they will fall in love and join the movement to save the gorillas,” explains Gillie.

Through a partnership with the Hudson Yards-Hell’s Kitchen Alliance and NYC Parks, the sculpture will be on display in Bella Abzug Park as of August 24, 2020 and will remain on view for nine months.