DESTINED FOR GREATNESS: ONE OF MICHELANGELO’S FIRST KNOWN STUDY OF A NUDE

A nude figure stands in front of two others, his shoulders hunched, his arms crossed. His stance is recognisable as that of the shivering man waiting to be baptised by Saint Peter in the fresco The Baptism of the Neophytes (1426-27) in the Brancacci Chapel in Florence. 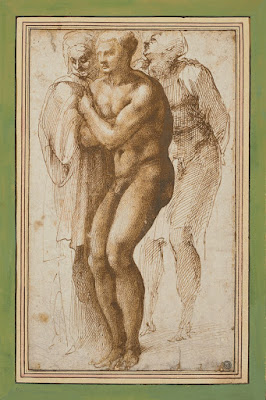 Part of the church of Santa Maria del Carmine, the chapel was painted with a cycle of scenes from the life of the apostle by Masaccio (1401-28), together with his colleague Masolino and later completed by Filippino Lippi. Marking an important shift in the development of Renaissance art, it soon became a site of devotion for artists as well as churchgoers, among them the young Michelangelo Buonarroti (1475-1564).

He made several studies from the frescoes, including a recently rediscovered drawing, A nude man (after Masaccio) and two figures behind, that will be sold at Christie’s Paris on 18 May in the single-lot auction, Michelangelo’s First Nude: A Drawing Rediscovered.

While the position of the central figure in Michelangelo’s version is the same as in Masaccio’s fresco, he has added a more defined musculature. ‘It’s so much more than a copy,’ says Stijn Alsteens, International Head of Old Master Drawings at Christie’s. ‘Michelangelo has decided to make the figure into something that corresponded more to his aesthetic by making him much more robust and monumental, while at the same time keeping the fragility of the figure, who is exposed and shivering.’ He did this by ‘subtly shifting the position of the feet and redrawing the head a little, but especially by emphasising the back and the buttocks of the man.’

The skill with which this effect has been produced suggests the work of an accomplished draughtsman. It is hard to put a specific year on the work, but Alsteens says it probably dates to 1496, when Michelangelo, about 21, ‘was already remarked by many as an exceptional artist and was about to be offered prestigious commissions’.

As well as altering the main figure, Michelangelo added two men who ‘bear no relation’ to those in the fresco but recall figures that can be found in a drawing by the artist in the Teylers Museum in Haarlem. These two figures are drawn in a sketchier style than the central one, and can be seen as further examples of what Alsteens calls Michelangelo’s talent for ‘telling stories that convey beauty and drama with the help of the human figure, in particular the male figure’.

The drawing offers a remarkable insight into the development of the artist’s eye, says Alsteens. Through the three figures we can see Michelangelo ‘formulating the subjects and the style on which he is going to build most of his œuvre’. One of the earliest surviving works by Michelangelo, A nude man (after Masaccio) is thought to belong to a small group of drawings now in major museums in Europe, based on the Brancacci frescoes and other works by Masaccio.

Michelangelo’s interest in the chapel is recorded in Giorgio Vasari’s book The Lives of the Most Excellent Painters, Sculptors and Architects, first published in 1550. He notes how the artist ‘copied those works with so much judgement that the craftsmen and all other men were astonished, in such sort that envy grew against him together with his fame’.

As well as being hugely exciting for academics and admirers of Michelangelo’s work, the drawing also represents a major event for the art market. ‘His drawings are very rare, and there are no known paintings or sculptures by him outside public collections,’ says Alsteens.

The drawing would have remained in private hands, overlooked and misattributed, were it not for a chance discovery in 2019, when Christie’s was asked to value a collection in France. On the basis of a photograph, Furio Rinaldi, then associate specialist in the Old Master Drawings department in New York, suggested it could be a genuine Michelangelo. He had assisted with the exhibition Michelangelo: Divine Draftsman and Designer at the Metropolitan Museum of Art the previous year.

Rinaldi was convinced the drawing was related to the others in the Brancacci group, and his theory was soon confirmed by leading scholars, such as Paul Joannides, Emeritus Professor of Art History at Cambridge University. ‘Every year a great drawing comes up for sale somewhere,’ says Alsteens, ‘but what is exceptional here is that not only is it a great drawing, it’s a drawing no one knew existed.’

While it was never recognised as a Michelangelo by its owners, the drawing has been well looked after, including by Modesto Genevosio, a collector from Turin who was its custodian in the 18th century. He thought it was the work of a minor artist called Pietro Faccini, but nonetheless went to the trouble of mounting it.

After Genevosio, its provenance is, as is often the case with drawings, a little vague. ‘In some way it found its way through the world,’ says Alsteens. Eventually it ended up in an auction at the Hôtel Drouot in Paris in 1907, where it was sold to the famous pianist and conductor Alfred Cortot. It was given the attribution ‘school of Michelangelo’ and only a brief catalogue entry.

The drawing will now return to the saleroom with significantly more fanfare. It is expected to easily break the previous record set for the artist by another nude male study, The Risen Christ, which sold at Christie’s London in 2000 for £8.1 million.

‘We’ve seen great demand for works by Michelangelo and other great Italian artists from European, American and Asian collectors,’ says Alsteens. But A nude man (after Masaccio) and two figures behind won’t just be of interest to collectors of Old Master drawings, he suspects. ‘I think the work will also appeal to people who collect paintings or sculptures. It’s a fairly large drawing, it's very well preserved and in many ways is very modern. One could see it appealing to someone who also collects Lucian Freud.’

The work’s appearance at pre-sale viewings in New York and Hong Kong this month is sure to draw crowds, and rightly so, says Alsteens. After all, for scholars, collectors and art lovers alike, ‘this is an exceptional drawing by one of the greatest figures in Western art’.