MONET IN AMERICA: HOW THE US HELPED CEMENT THE REPUTATION OF ONE OF THE 20TH CENTURY'S MOST COVETED ARTISTS 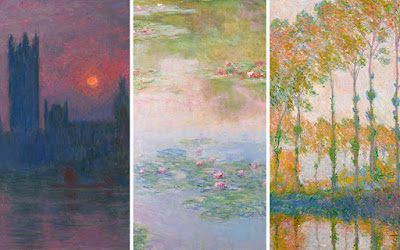 Three paintings from the collection of Anne H. Bass trace the role of American collectors in the rise of Monet’s international profile

The 12 works from The Collection of Anne H. Bass that will lead the 20th Century Evening Sale at Christie’s New York this May include three exquisite paintings by Claude Monet, spanning the full breadth of the artist’s mature oeuvre: Peupliers au bord de l’Epte, from his bucolic paintings of the French countryside in the early 1890s; Le Parlement, soleil couchant, one of his rhapsodic views of foggy London from 1900-1903; and the 1907 Nymphéas, from his ethereal visions of his beloved water gardens at Giverny.

The works, each of which were purchased by prominent American collectors early in their histories, not only highlight the artist’s work in series; they also underscore the significant role of Monet’s first American patrons, whose enthusiasm for his visionary Impressionist style ran in contrast to the skepticism of the French public and proved essential to the growth of the artist’s international reputation and ultimately his success.

‘These three major series pictures by Monet in one collection, coming to the market at the same time, represent a rare opportunity,’ says Vanessa Fusco, Co-head of the 20th Century Evening Sale. ‘And they each speak to this collecting story and the American embrace of what was at the time a very avant-garde art movement.’

American audiences first got a glimpse of Monet’s bold visual language in 1866, when one of the young artist’s paintings was included in an exhibition on French art at the Derby Gallery in New York. Opportunities to see his work in the United States were sporadic over the next two decades, but each instance grew his following among the East Coast cultural elite, who were struck by the innovative technique and fresh vision of the Impressionist’s carefully observed landscapes.

‘These three major series pictures by Monet in one collection, coming to the market at the same time, represent a rare opportunity’ —Vanessa Fusco

American painters who visited Paris — including John Singer Sargent, Tom Perry, Theodore Robinson, and Mary Cassatt — further fueled interest in Monet and his contemporaries: ‘They came back with tales of the strength and ingenuity of these painters,’ says Fusco.

In particular, Cassatt introduced many leading figures within her social circle to the Impressionists and facilitated several important sales. ‘Monet is coming up…’ she advised her brother Alexander in 1883. She also advised Frank Graham Thomson and a young Louisine Waldron Elder, who would go on to marry the sugar magnate Henry O. Havemeyer. By the 1890s, the Havemeyers were some of the foremost buyers of Impressionist art in the US.

Monet’s earliest American collectors mostly purchased his works in Paris, while traveling through Europe, but in the 1880s a few forward-thinking dealers began bringing the artist’s paintings across the Atlantic directly to the US market. One of the most influential was Paul Durand-Ruel, who met the artist in London in 1871 and went on to become his primary dealer.

Durand-Ruel first tested the waters by sending three Monet landscapes to the American Exhibition of Foreign Products, Arts & Manufactures, in Boston in 1883. It was here that the dealer connected with James F. Sutton, a founding director of the American Art Association, who later mounted a large-scale exhibition of Durand-Ruel’s Impressionist holdings, including 48 paintings by Monet, in New York in 1886. The show caused a sensation and marked a turning point in American collecting trends, solidifying the ascent of Monet and his contemporaries.

All three of the Monet paintings to be offered in the upcoming sale of the Bass Collection at Christie’s were purchased from Durand-Ruel by important American buyers whose progressive collections contributed to the artist’s international reputation as one of the most sought-after practitioners of Impressionism...............