‘TO LAUGH, AS IF DEATH WERE TICKLING US WITH HIS SCYTHE’: ALFRED HITCHCOCK AND PAUL KLEE

The great director saw Klee not just as his favourite painter, but as a peer interested in the same forms of creative expression 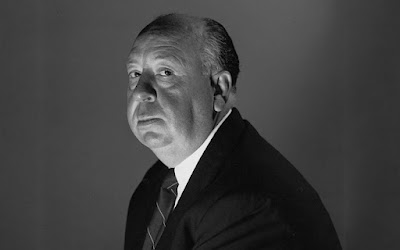 It might have seemed like a coincidence when, in 1938, a Paul Klee painting caught Alfred Hitchcock’s eye. Following the premier of his film The Lady Vanishes, he stopped into an art exhibition in London and was drawn to the Swiss-German artist’s Maske mit Sense (Mask with Scythe). It cost £600, or about $35,000 today, and despite the commercial success he was enjoying, Hitchcock likely hesitated at the price tag.

Persuaded by an unspoken connection, or perhaps by the familiar theatrical theme of masks, Hitchcock eventually pulled out his chequebook and made the purchase. As a result, this work became a foundational piece of his art collection.

Hitchcock, the so-called master of suspense, was one of the 20th century’s most notable directors, having made films like The Birds (1963), Psycho (1960), and Rear Window (1954). He used templates that audiences were familiar with from the noir era — espionage, crime, voyeurism — but flipped them in a modern way that explored psychology through film aesthetics. His art collection, which features Klee among others and continually inspired him throughout his career, is included in the Works on Paper Day Sale at Christie’s New York on 14 May.

Maske mit Sense (1927) was created two years after Klee and the Bauhaus group were forced to relocate from Weimar to Dessau, a move which eventually provided him with the use of a large studio space in the city’s famous Bauhaus building, as well as a need to refine his core theories to educate its student body.

‘Klee was working within all sorts of important movements of the time,’ explains David Kleiweg de Zwaan, Senior Specialist at Christie’s. ‘He was working with Wassily Kandinsky, Laszlo Moholy-Nagy, Walter Gropius, and he was profoundly inspired by the work of Franz Marc, as well as Picasso's Cubism and Robert Delaunay's ideas on colour. However, he never explicitly joined anything — he had his own style, independent from them, but it was not created in isolation.’

Like Hitchcock, Klee studied, observed and took part in the dominant trends of the time, but his style was always his own. Studying these processes, he worked to refine these already explosive theories of modern art.

Kleiweg de Zwaan says, ‘We don't necessarily think of Klee as an abstract painter, but that was how Hitchcock viewed him. He was not taking Klee’s work at face value but looking at the very deep thoughts Klee elucidated in his paintings, as well as his writing.’

Though they were different in their artistry — Klee worked as a relatively independent painter, while Hitchcock operated what was essentially a creative factory — both were close observers of what was happening around them and they laid the foundations of two of the 20th century’s most distinct forms of artistic expression: modernism and cinema. Their bodies of work, attractive to a wide audience because they were not overt in their intellectualism, revealed a deep commitment to their respective forms under a mask of distinctly ludic playfulness.

For Hitchcock, his tendency toward theatrical subversion lurked beneath boilerplate Hollywood plotlines. As he said to Cinema magazine in 1963, ‘I put first and foremost cinematic style before content.’ For him it was about the road taken, rather than the destination: ‘I don’t care what the film is about, so long as the audience goes through that emotion!’

His famous cameos, for example, are not just a director inserting himself as an Easter egg in his films. He is posing a question of authorial intention — a fundamental query when distinguishing between entertainment and art. It’s unclear whether his appearance is as the director of the movie, the insertion of an unrelated character, or both. This tactic echoes throughout the various disciplines of modernity, but it’s notable in Klee’s Odysseisch, from 1924, depicting the mythic hero Odysseus.

We quickly recognize Odysseus, hands clasped in front of him, as the subject of this drawing. Like many artists before him, Klee returns to classic characters of myth, but here the reference is somewhat misleading. As the art historian Peter-Klaus Schuster noted: ‘What Klee, as a poetry-writing painter and painting poet thus sets before our eyes are by no means illustrations of ideas or literary prescriptions. This kind of decodable clarity is utterly lacking with Klee. He is not a painter who spells out his thoughts.’

Instead, Klee’s work — and Hitchcock’s — is left open to the perception of the viewer. ‘Rather than being a closed, formal language,’ says Kleiweg de Zwaan, ‘the work of Hitchcock and Klee is very approachable. As an audience, you can either stick your toe in or go all the way down the rabbit hole with both artists.’

Klee approached Homer’s Odyssey knowing that it had often been retold for modern audiences, like in James Joyce’s Ulysses from two years prior. Klee’s version, through its delicate, childlike line drawing style, reflects Hitchcock’s thoughts on composition over content. It is the kind of playful, poetic fantasy that both often saw in the world of theatre, ballet and fairy tale.

Cinema so shocked its first audiences that one early filmgoer in Paris wrote ‘I can no longer think what I want to think. My thoughts have been replaced by moving images.’ Hitchcock knew the power of his medium, but he also recognized how it fit into the greater artistic canon.

He saw reflections of his own creative interests in Klee, whether through the movement of the eye along the canvas as it follows the line — which, as Klee said, was just ‘a dot that has gone for a walk’ — or in his masking of more serious creative intentions under a guise of play.

‘Klee’s works do not allow themselves to be read at the glance of an eye across a room’ says Kleiweg de Zwaan. ‘He is really looking to control his viewers, their thoughts and experiences, something Hitchcock also sought to do.’ Their shared creative sensibility is at the nucleus of important 20th century forms. It is, as Klee quoted from the German poet Heinrich Heine in his journal: ‘To laugh, as if Death were tickling us with his scythe.’