UKRAINIAN FREEDOM ORCHESTRA FORMED TO TOUR EUROPE AND U.S. THIS SUMMER IN ARTISTIC DEFENSE OF THEIR COUNTRY

Proceeds will go to the benefit of Ukrainians

Orchestra will comprise Ukrainian musicians who are refugees, members of internal orchestras, and members of European ensembles 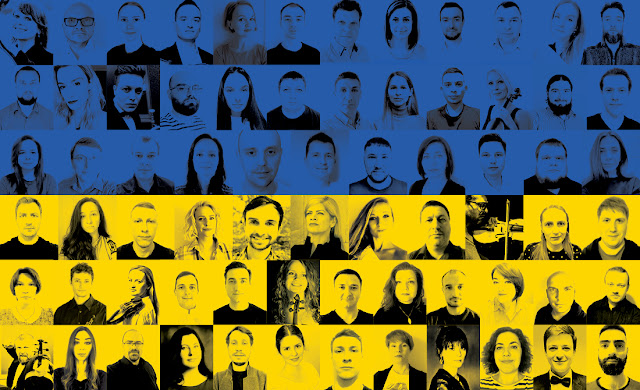 New York, NY (April 25, 2022)—In another gesture of solidarity with the victims of the war in Ukraine, the Metropolitan Opera and the Polish National Opera will gather leading Ukrainian musicians into the Ukrainian Freedom Orchestra for a European and American tour July 28–August 20, including stops in the United Kingdom, France, Germany, and the Netherlands, before culminating with concerts in New York and Washington, DC. The tour has been assembled with the cooperation of Ukraine’s Ministry of Foreign Affairs and its Ministry of Culture.

The orchestra will include recent refugees, Ukrainian members of European orchestras, and some of the top musicians of Kyiv, Lviv, Kharkiv, Odesa, and elsewhere in Ukraine. The Ministry of Culture and Information Policy of Ukraine is supporting the project by addressing the organizational issues of allowing male musicians to put down weapons and take up their instruments in a remarkable demonstration of the power of art over adversity.

Money raised from the tour will go to support Ukrainian artists. Donations can be made to the Ministry of Culture at https://donate.arts.gov.ua/en

Under the leadership of Canadian-Ukrainian conductor Keri-Lynn Wilson, the orchestra will perform a program that includes Ukrainian composer Valentin Silvestrov’s Seventh Symphony; Chopin’s Piano Concerto No. 2, with Ukrainian virtuoso Anna Fedorova; and either Brahms’s Fourth Symphony or Dvořák’s Ninth Symphony.

Leading Ukrainian soprano Liudmyla Monastyrska, who is singing the title role of Turandot at the Met this spring, will also perform Leonore’s great aria “Abscheulicher!” from Beethoven’s Fidelio, a paean to humanity and peace in the face of violence and cruelty.

The orchestra’s musicians will gather in Warsaw on July 18 for an intensive rehearsal period led by Maestro Wilson to forge the ensemble, followed by the opening concert in the Polish capital at the Teatr Wielki–Polish National Opera on July 28. The residency and opening performance are being paid for by generous funding from the Polish Ministry of Culture and National Heritage, under the leadership of Minister Piotr Glinski. The tour will proceed with stops at the BBC Proms, on July 31, for a televised performance; Munich on August 1; the Chorégies d’Orange Festival in France on August 2; the Berlin Konzerthaus on August 4; the Edinburgh International Festival on August 6; Snape Maltings in England on August 8; the Amsterdam Concertgebouw Festival on August 11; and the Hamburg Elbphilharmonie on August 13. The orchestra will travel to New York on August 16, with concerts at Lincoln Center on August 18 and 19, followed by the final destination, the Kennedy Center in Washington, DC, on August 20.

The Metropolitan Opera and the Polish National Opera have played leading roles in the cultural world in standing up to Russia’s aggression in Ukraine and in expressing support for the war’s victims. The Met was one of the first performing arts organizations to hold a benefit concert for Ukraine, conducted by its music director, Yannick Nézet-Séguin, on March 14, drawing headlines worldwide. The Polish National Opera has been harboring refugees from Ukraine and presenting its own benefit concerts in support of its beleaguered neighbor.

In a joint statement, Peter Gelb, the Met’s General Manager, and Waldemar Dabrowski, the director of the Teatr Wielki–Polish National Opera, said, “Music can be a powerful weapon against oppression. This tour is meant to defend Ukrainian art and its brave artists as they fight for the freedom of their country.”

Maestro Wilson, who grew up in Winnipeg, home of the largest concentration of Ukrainians in North America, originated the idea of forming the orchestra. “I wanted to bring the best orchestral musicians of Ukraine together, from both inside and outside of their country, in a proud display of artistic unity,” she said. “I look forward to leading these gifted musicians across Europe and to the United States. This tour is an expression of love for their homeland and to honor those who have died and have suffered so much.”

Ukraine’s minister of culture, Oleksandr Tkachenko, expressed his appreciation to the Met and Polish Opera. “Today, culture is showing a completely new side. It can also be the ‘soft power’ that helps heal wounds. And not only in a figurative sense,” he said. “This tour of the Ukrainian Freedom Orchestra can help not only to raise funds for supporting Ukrainian artists, it will show the world the diversity and uniqueness of Ukrainian music and Ukrainian performers.” He added, “Ukrainian culture is original and deserves to be at the center of attention abroad. We thank our international colleagues for producing the tour.”

The assembling of orchestras in the face of violence and in the name of peace has a long tradition. The Israel Philharmonic Orchestra has its roots in an ensemble founded in Palestine by Bronisław Huberman in the 1930s to help rescue Jewish musicians in Europe from the Holocaust. The West-Eastern Divan Orchestra, founded in 1999 by the conductor Daniel Barenboim and the Palestinian scholar Edward W. Said, brings together musicians from Israel and Arab nations. The Afghanistan National Institute of Music, long a target of the Taliban, had sent ensembles out into the world before the recent Taliban takeover of the country.

The UK concert agency Askonas Holt, one of the world’s leading management agencies, is organizing the Ukrainian Freedom Orchestra tour. Productions Sarfati is coordinating the concert in France. Sponsors include Bloomberg Philanthropies, the Ford Foundation, and United Airlines. The Edinburgh International Festival performance is supported by the Scottish government. Presenter fees will also help pay for the tour.