WHAT YOU NEED TO KNOW ABOUT VE DAY. 77 YEARS FROM NAZI SURRENDER, SECOND WORLD WAR

8 May 1945 – VE (Victory in Europe) Day – was one that remained in the memory of all those who witnessed it. It meant an end to nearly six years of a war that had cost the lives of millions; had destroyed homes, families, and cities; and had brought huge suffering and privations to the populations of entire countries.

Millions of people rejoiced in the news that Germany had surrendered, relieved that the intense strain of total war was finally over. In towns and cities across the world, people marked the victory with street parties, dancing and singing.

But it was not the end of the conflict, nor was it an end to the impact the war had on people. The war against Japan did not end until August 1945, and the political, social and economic repercussions of the Second World War were felt long after Germany and Japan surrendered.

Here's what you need to know about VE Day and how it was marked in Britain and around the world. 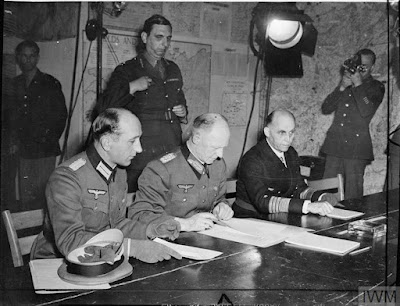 With Berlin surrounded, Adolf Hitler committed suicide on 30 April 1945. His named successor was Grand Admiral Karl Dönitz. During his brief spell as Germany’s president, Dönitz negotiated an end to the war with the Allies – whilst seeking to save as many Germans as possible from falling into Soviet hands.

A German delegation arrived at the headquarters of British Field Marshal Bernard Montgomery at Lüneburg Heath, east of Hamburg, on 4 May. There, Montgomery accepted the unconditional surrender of German forces in the Netherlands, northwest Germany and Denmark. On 7 May, at his headquarters in Reims, France, Supreme Allied Commander General Eisenhower accepted the unconditional surrender of all German forces. The document of surrender was signed on behalf of Germany by General Alfred Jodl and came into effect the following day. 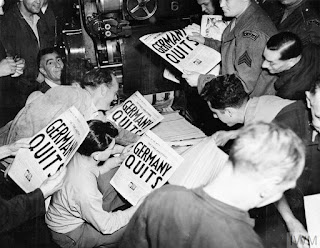 Germany’s surrender was not a surprise

The news of Germany’s surrender was not surprising. It had been anticipated for some time and people across Britain were on standby to start celebrating the end of the war.

The announcement that the war had ended in Europe was broadcast to the British people over the radio late in the day on 7 May. The BBC interrupted its scheduled programming with a news flash announcing that Victory in Europe Day would be a national holiday, to take place the following day. Newspapers ran the headlines as soon as they could, and special editions were printed to carry the long-awaited announcement. The news that the war was over in Europe soon spread like wildfire across the world..........