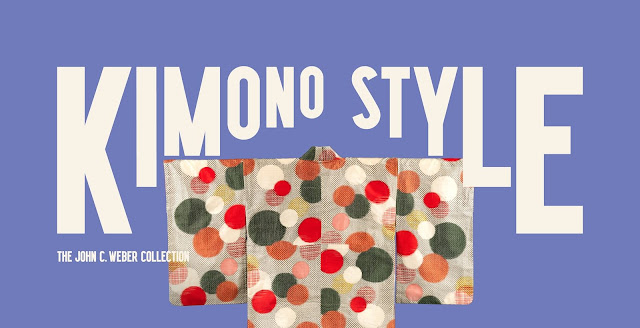 This exhibition will trace the transformation of the kimono from the late Edo period (1615–1868) through the early 20th century, as the T-shaped garment was adapted to suit the lifestyle of modern Japanese women. It will feature a remarkable selection of works from the renowned John C. Weber Collection of Japanese art that explore the mutual artistic exchanges between the kimono and Western fashion, as well as highlights from The Costume Institute’s collection.

The weaving, dyeing, and embroidery techniques for which Japan is famed reached their peak of artistic sophistication during the Edo period. Members of the ruling military class were the primary consumers of sumptuous kimono, each one being custom-made. At the same time, a dynamic urban culture emerged, and the merchant class used its wealth to acquire material luxuries. Kimono, one of the most visible art forms, provided a way for the townspeople to proclaim their aesthetic sensibility. Depictions of kimono in Japanese woodblock prints were widely studied by Western couturiers in the late 19th century. The garment’s comparatively loose, enveloping silhouette, and its rectilinear cut would have the most profound and lasting influence on Western fashion, with couturiers like Madeleine Vionnet and Cristóbal Balenciaga taking inspiration from the kimono for their avant-garde creations.

In the Meiji period (1868–1912), Western clothing was introduced to Japan. Simultaneously, modernization and social changes enabled more women to gain access to silk kimonos than ever before. Around the 1920s, affordable ready-to-wear kimono (meisen) became very popular and reflected a more Westernized lifestyle. These were sold in department stores modelled on Western retailers, following Western-style marketing strategies. To illustrate these connections, the exhibition will present over 60 kimonos alongside Western garments, paintings, prints, and decorative art objects.