ANNE HECHE DIES: 'WE HAVE LOST A BRIGHT LIGHT". BEHOLD THE RISE OF “DARK BRANDON”

US actress Anne Heche is legally dead but will remain on life support to allow for a possible organ donation, her representative has said.

The 53-year-old had been in a coma for a week after crashing her car into a house in Los Angeles.

"Today we lost a bright light, a kind and most joyful soul", her family said in a statement on Friday.

Heche appeared in films including Volcano, Donnie Brasco and the 1998 remake of Psycho.

The mother-of-two also appeared on Dancing with the Stars, the US equivalent of Strictly Come Dancing, in 2020.

According to the Los Angeles Fire Department (LAFD), Heche's vehicle "erupted in heavy fire", which took 59 firefighters more than an hour to fully extinguish. The two-storey home she crashed into was left "uninhabitable".

As well as suffering burns, the actress was left with "a severe anoxic brain injury" - when the brain is deprived of oxygen - her family said.

A representative said the late actress is "legally dead," but added that her life-support treatment will continue temporarily to check if she may be a match for a potential organ donation.

"Anne will be deeply missed but she lives on through her beautiful sons, her iconic body of work, and her passionate advocacy", her family's statement said.

"Her bravery for always standing in her truth, spreading her message of love and acceptance, will continue to have a lasting impact."

Heche was born in 1969 in Ohio and her family moved around many times during her childhood.

When she was 13 years old, her father died of HIV/Aids, and she later said in her 2001 memoir Call Me Crazy that he had repeatedly raped her as a child.

In interviews promoting the book, she said the abuse caused her to be "insane" for the first 31 years of her life and that she had created a fantasy world called the "Fourth Dimension" to make herself feel safe.

Three months after her father's death, her brother was killed in a car crash, which she believed was suicide. Her mother disputed both the suicide and the abuse claims and the pair became estranged.

After her family relocated to Chicago, Heche was spotted by a talent agent in a school play.

She became known in the late 1980s for portraying twins Vicky Hudson and Marley Love on the soap opera Another World. The roles won her a Daytime Emmy Award and two Soap Opera Digest Awards.

Heche came to wider prominence in the late 1990s, playing Maggie in crime drama movie Donnie Brasco, alongside Johnny Depp. She later told interviewer Larry King it had been "heaven" working with Depp.

She played Amy Barnes, a geologist and seismologist in the the disaster movie Volcano, opposite Tommy Lee Jones, while cult slasher flick I Know What You Did Last Summer saw her portray Melissa "Missy" Egan.

She also appeared in the action comedy film Six Days, Seven Nights and the drama-thriller Return to Paradise before portraying Marion Crane in Gus Van Sant's remake of the classic horror film Psycho.

In 1997, having previously only dated men, she began a relationship with US talk show host and comedian Ellen DeGeneres. The high-profile couple said they would get a civil union if it became available in Vermont, but they split up three years later.

Heche later suffered from mental health problems and reportedly struggled with drug use, at one point being hospitalised after parking on a highway in California and walking into the desert.

In 2001, Heche married "Coley" Laffoon, a cameraman whom she met on DeGeneres' stand-up tour, and they had a son, before divorcing nearly six years later. She reportedly left her husband for Men in Trees co-star James Tupper and in 2008 her representative confirmed that the actress was pregnant with her second son. The couple split in 2018.

A new century brought a new direction work-wise, with roles in fewer blockbusters and more acclaimed independent films, such as drama Birth, sex comedy Spread and 2011's Cedar Rapids - about a naïve insurance agent on a life-changing work trip to Iowa.

She received an Emmy nomination for her role as Roweena Lawson in the 2004 TV film Gracie's Choice, about a teenage girl who tries to raise her siblings on her own after their drug-addicted mother is sent to jail.

The same year, she was nominated for best actress at the Tony Awards after performing opposite Alec Baldwin in a Broadway production of Twentieth Century.

Memes depicting a sinister, all-powerful Joe Biden alter ego are sweeping the internet, and the Democratic establishment is loving it. 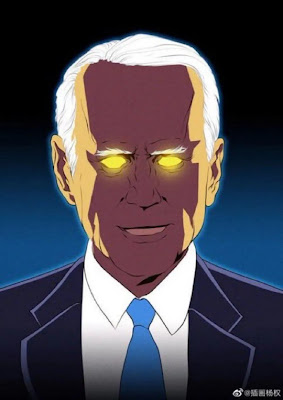 In the continuing memeification of our entire society, a sinister alter ego to President Joe Biden known as “Dark Brandon” has reached a zenith this week. Spawned from a sort of telephone-game misinterpretation by a television commentator, who heard “Fuck Joe Biden” as “Let’s Go Brandon,” this meme began as a mascot for shade-throwing from right-wingers. The next evolution seemed to come from a Chinese illustrator named Yang Quan, who posted a manga-style sequence of Biden-wins-Game-of-Thrones imagery on his Weibo microblog account, following Biden’s 2020 election victory, according to Politico. For a time, Dark Brandon was the “Thanks, Obama” of the Biden White House, eventually evolving into a bleak antihero for a distraught left-wing voting base.

But your derision only makes Dark Brandon stronger, fools! Over the weekend, it seems the meme has outgrown its humble origin story as a Republican playground bullying tactic, and is now going viral on a wave of left-leaning memelords rallying behind this chaotic-evil version of, let’s face it, a generally unintimidating politician.

“Dark Brandon is crushing it,” he noted.

Cue the wave of hot takes on Dark Brandon phenomenology, with Slate characterizing Dark Brandon as the impotent fantasy life of a voting base dying for a show of force from their milquetoast alternative to the modern axis of evil that is the GOP.

“We can debate over whether it’s foolish to assign any intellectual significance to the tweets made by weirdos on the internet, but I do think that both Dark Brandon and DarkMAGA were interesting artifacts of America’s superheated political environment,” writes Luke Winkie, for Slate. “The country does feel like it’s perched on the precipice of some sort of prophetic rebirth, and perhaps, as our institutions erode into the sea, Dark Brandon is the harbinger of that final judgment.”

“And while the White House often repeats the ‘Twitter is not real life’ mantra, the internet love was welcomed in some Democratic circles after several months of trying to defend an administration with approval numbers in the thirties,” write Politico reporters Alex Thompson and Allie Bice.

The flourishing of Dark Brandon has dovetailed with a week of political wins, including a historic bill to empower clean energy initiatives, the assassination of al Qaeda leader Ayman al-Zawahiri, and a drop in gas prices…………………….