Salman Rushdie: Satanic Verses author ‘on ventilator and can’t speak’ after being stabbed in neck

Author Sir Salman Rushdie is on a ventilator and unable to speak after being stabbed in the neck as he was about to give a speech in New York, his agent has said.

Police said The Satanic Verses author, 75, was attacked and suffered an apparent stab wound to his neck as he went on to the stage at the event in Chautauqua around 4pm UK time yesterday.

His agent Andrew Wylie told the New York Times that the news was “not good,” and that Mr Rushdie was unable to speak and could lose an eye after suffering serious injuries.

Mr Wylie said: “Salman will likely lose one eye; the nerves in his arm were severed; and his liver was stabbed and damaged.”

Following publication of The Satanic Verses in 1988, Mr Rushdie received deaths threats and was forced into hiding for 10 years after a fatwa was placed on him by Ayatollah Ruhollah Khomeini, the Leader of Iran, who claimed the novel was blasphemous and insulted the Prophet Muhammad and The Koran.

New York State Police named the suspect as Hadi Matar, 24, of Fairview New Jersey and said there was not yet any indication of a motive for the attack.

Mr Rushdie was stabbed in the neck at least once and in the abdomen at least once before a doctor who was in the audience initially administered medical treatment, the police revealed.

Witnesses said a man wearing a black mask stormed the stage “at lightning speed” then attacking the writer for up to 20 seconds before he fell to the floor at the Chautauqua Institution, a not-for-profit education centre.

The attacker was then restrained before being arrested, with photos taken at the scene showing blood stains on a screeen and Mr Rushdie being treated onstage.

A small group of people were seen holding up his legs as he received treatment onstage, one witness said.

Mr Rushdie was airlifted to a local hospital by helicopter. His condition was not immediately known.

New York Governor Kathy Hochul said that the British author was alive and paid tribute to a police officer who “saved [Rushdie’s] life”.

Visit an ‘abandoned’ Tube station underworld and discover what secrets lurk beneath our busy streets in our new Hidden London exhibition! 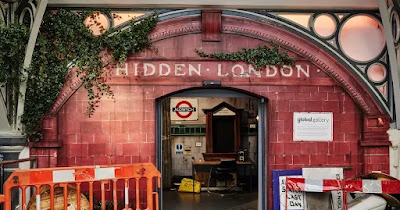 Hidden London: the Exhibition takes you on an immersive journey of some of London’s most secret spaces in the oldest subterranean railway in the world. These ‘forgotten’ parts of the Tube network have incredible stories to tell about Britain’s wartime past - such as the Plessey aircraft underground factory which had 2,000 members of staff, mostly women, working in the two 2.5 mile-long tunnels on the eastern section of the Central line during the Second World War.

You can enjoy - some for the very first time - the largest number of rare archive photos, objects, vintage posters, secret diagrams and decorative tiles from disused stations that have been brought together in one location.

Discover stories about how Churchill took shelter at the height of the Blitz in the Railway Executive Committee’s bomb-proof headquarters deep underground at Down Street station. See how shelterers at Clapham South lived, where they slept and how they kept entertained, including some archive photos showing shelterers down in the tunnels.

You can also explore other iconic locations which we’ve recreated in our Global Gallery, including the historic abandoned ticket hall at Aldwych station with an original 1930s ticket booth, and its famous Leslie Green tiles.

The exhibition uncovers why these ‘lost’ quirks of the Underground network exist; changes in population, new and expanding Underground lines resulted in lower passenger numbers at certain stations such as Aldwych, economic priorities and political pressures have all led to spaces being abandoned.

But they rarely stay that way. While some sections of the Tube system lie ‘forgotten’, many have been repurposed for new activities and are used for special Hidden London tours, growing salad leaves, and for filming locations.

If you’re a film buff, you will love exploring the film section, where you can discover the films that use abandoned Tube stations as filming locations, including V for Vendetta and Skyfall.