Yves Saint Laurent’s love for the colors of Morocco are the focus and inspiration for the exhibition Love YSL at the Palácio Cadaval in Évora through 31 October. 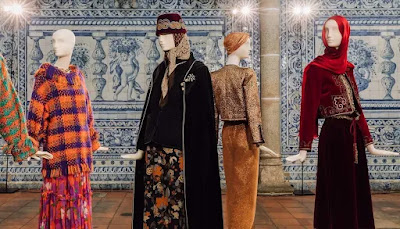 “My introduction to Marrakesh came with a jolt: the city opened my eyes to color,” said Yves Saint Laurent after his first trip to the fabled Moroccan city in 1966.  His love affair with the country lasted over 40 years.

MOROCCO AS A MUSE –  Fifteen Yves Saint Laurent garments, on loan from Foundation Pierre Bergé-Yves Saint Laurent in Paris and private collections, are displayed in the opulent Church of São João Evangelista on the palace grounds.  The garments reveal the rich colors and textures that captured the passion of the designer.

YSL LOVE CARDS – In the heart of the palace, Christmas cards designed by Yves Saint Laurent are headliners for a wider exhibit of works by contemporary Moroccan artists influenced by the fashion designer.

NOURDDINE AMIR – At the behest and patronage of Pierre Bergé (YSL’s lifetime partner), Noureddine Amir is the first Moroccan designer to have presented a haute couture collection in Paris, in July 2018. This perspective presents some of Amir’s works. His sculptural dresses blur the lines between fashion, art and architecture by using varying textures, colours, and shapes reminiscent of Amazigh construction found in towns in the southern regions of North Africa.

The Palácio Cadaval itself is worthy of the your visit.  This 14th century palace is the ancestral home of the Duke of Cadaval.  It was built on the ruins of a Moorish castle utilizing elements of Mudéjar, Gothic and Manueline architectural design.  The complete estate includes a vast multi-story residential area, two interior gardens and a church, which also serves as the final resting place of every generation of the Dukes of Cadaval family. The church is also a national landmark because of its grand interiors, with azulejo panels dating from the early 18th century.