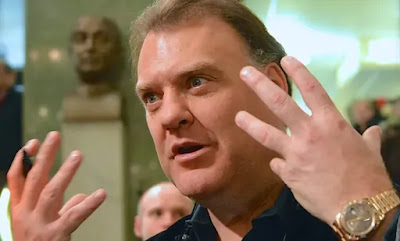 His petition, which has been signed by nearly 30,000 people so far, calls on Secretary of State for Digital, Culture, Media and Sport Michelle Donelan to “resume ACE funding to English National Opera immediately”.

However, the petition makes no mention of the Arts Council England’s cuts to Welsh National Opera.

The Millennium Center Cardiff-based opera company’s annual allowance will also be cut by a third to £4million. It is funded in part by Arts Council England as it performs in Bristol, Liverpool, Birmingham, Southampton and Oxford as well as Wales.

Bryn Terfel’s petition reads: “A total of £50m has been withdrawn from London arts funding. This is devastating for the UK cultural climate.”

It adds: “We are calling on the Government to radically reconsider the removal of English National Opera as the national portfolio organization of Arts Council England.

“The careers of singers, musicians, technical staff, creatives and other professionals in both permanent and freelance professions will be at risk. Hundreds of thousands of viewers in London and across the country, on TV and digital, will be without opera.

“Fund the ENO to continue their important contribution to London’s global cultural status and to support their nationwide agenda to improve levels and their pioneering NHS program ENO Breathe for long-sufferers from Covid. ENO is opera for everyone!”

In a statement released on Twitter this week, English National Opera urged opera fans to sign the petition, saying: “We would like to work with DCMS and ACE to support the alignment agenda, but it’s ours It has become clear that their proposal requires an urgent overhaul so that we can continue to be a world class opera company in London and perform more regularly in all parts of the country including Manchester.

“Please help us get them to reconsider their current decision by signing this petition, kindly started by Sir Bryn Terfel.”

This was announced by the director general of Welsh National Opera Guardian that he doesn’t know how to catch up on the lost funding.

“We have prepared for a cut, but not at this level,” said general manager Aidan Lang.

“Obviously, England’s supply of operas has to be scaled back. But we don’t know how to fill that gap – if we don’t go to these cities, who will?

“Basically, the advantage of cross-border funding is that both countries receive the benefits of a full-time opera company at a proportion of the actual costs.

“It’s all very well, just taking the money from England, but it’s not quite as simple as reducing the proportional number of performances we give in England.”