“Grotesque Head of an Old Woman,” recently acquired by the National Gallery of Art, is one of several studies by Leonardo exploring exaggerated facial expression. 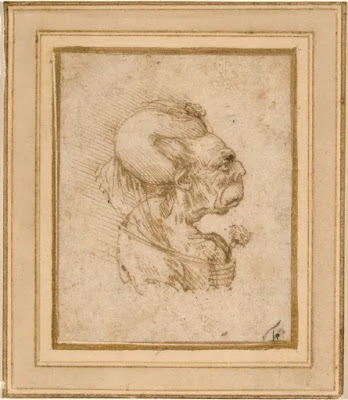 The National Gallery of Art (NGA) in Washington, DC, is now the proud owner of Leonardo da Vinci’s 1489–1490 drawing “Grotesque Head of an Old Woman,” a work constituting both an impressive rendering of an imaginary individual and a possible 15th-century joke. The work was promised to the museum in 2017 by collector and patron Dian Woodner and has been included in three exhibitions at the NGA since 1995.

“Grotesque Head of an Old Woman” is one of several studies by Leonardo exploring exaggerated facial expression and character that he termed visi monstruosi, “monstrous faces.” According to the museum, the subject of this work is unique, born of the artist’s imagination, and exemplifies his pursuit of depicting “the astounding and the unusual.”

“Like the other imaginary heads, this drawing appears to have been a stand-alone exercise,” the museum said in a statement. “It helped to prepare and inform the unprecedented range and subtlety of human expression in Leonardo’s paintings.”

The NGA also notes that the drawing perhaps illustrates Leonardo’s preoccupation with jest, and the woman’s drooping chin and scowl could be signs of “crude humor.” Despite the subject’s sophisticated poise and clothing and the artist’s depiction of his subject in the style of an official portrait, iterations of this series of drawings in the coming centuries became what are now recognized as caricatures, a style that rose to prominence in the 18th century.

Even if Leonardo created “Grotesque Head of an Old Woman” partly as a joke, his followers took the work quite seriously. The NGA holds an example in its collection: a 1510 drawing by Leonardo’s pupil named Giovanni Francesco Melzi, who drew the same woman facing a man, and similar works are also housed at The Metropolitan Museum of Art and in England’s Royal Collection Trust.

The study is the DC museum’s second Leonardo drawing and one of just nine drawings by the artist held in public collections in the United States.