While well known for our exceptional and wide-ranging collection of Japanese prints, the museum’s holdings of Japanese art also include significant works of Buddhist art, painted folding screens, ceramics, and kimono. What becomes clear when surveying these diverse works—which range from ancient to contemporary—is that Japanese art is very much a living tradition. Check out these highlights of the collection.

One of the most iconic images in the world, this print is not one of a kind. Katsushika Hokusai made the work as part of his much celebrated series Thirty-Six Views of Mount Fuji (Fugaku sanjûrokkei), which he started in 1830 at 70 years old.

Thousands of copies were made from the original woodblocks, and the Art Institute’s three copies are among the earliest created. Each iteration of the work is slightly different from the others—in fact, the original print had a pink sky, a feature that has faded away in many of the copies. The Art Institute’s collection includes one of these rare versions with the pink sky. While popularly known by its nickname,

“The Great Wave,” the actual focus of the print is Mount Fuji, which appears small but steadfast beyond the wave, impervious to its threats. Read more about this print on the museum’s blog, and explore the Art Institute’s outstanding collection of works by Katsushika Hokusai. 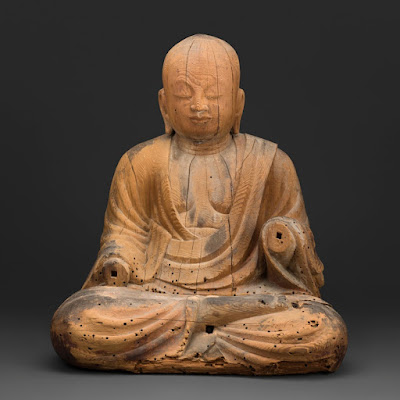 This representation of a fully decorated horse, complete with saddle, stirrups, and bell ornaments on its front and back is a haniwa, a terracotta figure made for ritual and funerary use.

Found in Ibaragi prefecture, northeast of Tokyo, this clay figure would have likely been at the front of a burial mound, in an area filled with a variety of figurines, as well as animal forms, perhaps meant to represent the possessions the deceased hoped to take with them after death.

The form of the horse is significant, as horse breeds from the Asian continent proved to be effective militarily and quickly became symbols of wealth and power. Horses have also long been considered divine beings with special spiritual abilities.

This print is from Utagawa Hiroshige’s best-known series—One Hundred Views of Edo. Containing an ambitious 119 images in all, the series depicts famous and noteworthy areas of Japan’s capital city Edo (now Tokyo) in all four seasons.

One Hundred Views of Edo began as a luxury edition, which necessitated specialized printing effects and a large number of color blocks. As the series grew in popularity and many more prints were made, the coloring became more heavy-handed and the printing less skillful.

The Art Institute’s prints from this series feature subtle color gradation and a wide range of bright colors, revealing that they are most likely relatively early editions. The Plum Garden at Kameido is one of Hiroshige’s most recognizable designs, since it was famously copied by Vincent van Gogh in 1887.

The print’s close-up perspective of a blossoming plum tree and its unexpected hues, especially the reddish sky, make this a particularly innovative piece. This work came to the Art Institute by way of Clarence Buckingham, who purchased the print from architect Frank Lloyd Wright. 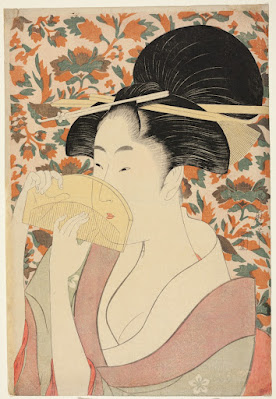 Likely part of a group of sculptures produced by one studio around the same time, this sculpture depicts the Shinto deity Hachiman, specifically Sōgyō Hachiman, or “Hachiman in the guise of a monk.”

The cult devoted to Hachiman originated at Usa in northeast Kyushu, a site relatively close to the Korean peninsula and also a prominent early Buddhist center.

Buddhism had been introduced into Japan in the sixth century, and monks became one of the most recognizable symbols of its practice. Hachiman’s guise reflects the melding of Buddhist and indigenous Shinto beliefs into a shared iconography………… 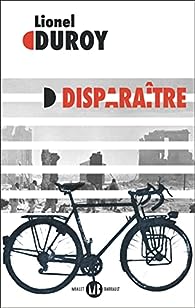