“The Philosophy of Modern Song” offers commentaries on a range of music, written in the singer’s unmistakable lyrical style. 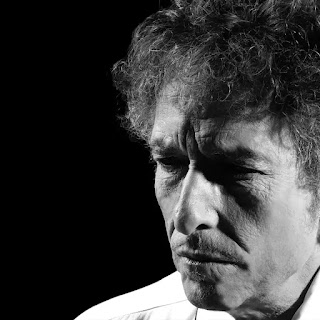 Bob Dylan gives us a sample of what he listens to in his new book, “The Philosophy of Modern Song.”Credit...William Claxton

To hear more audio stories from publications like The New York Times, download Audm for iPhone or Android.

Come with me, and let’s stand in the rain of the clauses and sub-clauses in Bob Dylan’s devious new book, “The Philosophy of Modern Song.”

Dylan has rounded up 66 songs, from Bobby Darin’s “Mack the Knife” and Webb Pierce’s “There Stands the Glass” to Nina Simone’s “Don’t Let Me Be Misunderstood” and the Clash’s “London Calling,” and he riffs on them.

These riffs, which he flicks like tarot cards through a distant cactus, sound a lot like his own song lyrics, so much so that part of me wanted this to be a new record instead, wanted to hear these lines come croaking up from Dylan’s 81-year-old lungs and past his buckshot, barb-wired uvula.

Here are two selections, chosen half at random:

This song kicks you down, and before you can get up, it hits you again. This is the stuff to live for, and what you make of it all. This is mankind created in the image of a jealous godhead. This is fatherhood, the devil god and the golden calf — the godly man, a jealous human being. This mode of life is an all-confrontational mode of life, the highs and lows of it, what it actually is. Truth that needs no proof, where every need is an evil need. This is a ballad of outrageous love.

This song is all about hypocrisy. Hitting and running, butchering and exterminating, taking the grand prize and finishing in front. Then being big hearted, burying the hatchet, apologizing, kissing and making up. It’s about the hustle.

The first paragraph is about Marty Robbins’s “El Paso”; the second, Mose Allison’s “Everybody Cryin’ Mercy.” Nearly all the entries sound like this — they’re oracular. Dylan walks through this book casting aspersions, deadheading roses, calling down curses, scrounging for his next meal, with no direction home, hiding on the backstreets (oops, wrong singer), ringing them bells, not talking falsely now.

Who else sounds like this? Dylan slits open the underbelly of American life; he pokes at the entrails; he draws a lot out of these songs. It’s total warfare against the humdrum, and it’s completely great, except for when it isn’t. The tone becomes repetitive. In a lot of the cases, you could switch Dylan’s commentaries around, apply them to different songs and not know the difference. By the end he seems spent; he’s phoning some of the language in.

You keep reading because it’s Dylan, because there’s always an eerie little gas station, an Indian casino, an itinerant preacher or a syphilitic old madam around the next corner. You want to know what condition Dylan’s condition is in. Probably he’s about to release a bladderful of P.B.R. on somebody’s grave.

God, this book is sly. Talking about “Key to the Highway,” the Little Walter song, for example, he smuggles in this comment: “I have gotten lots of keys to different cities but I’ve never really tried to inspect anything yet.”

Dylan is helplessly epigrammatic. “No matter how many chairs you have, you only have one ass,” he writes. About the Cher song: “Gypsies, tramps and thieves could easily be the answer to the question, ‘Name three types of people you’d like to have dinner with.’”

The humor in “The Philosophy of Modern Song” trips over, often enough, into full-on gaslighting. In a section about the tailor Nuta Kotlyarenko, a.k.a. Nudie Cohn, and his rhinestone-covered custom outfits, for example, Dylan tells us that Neil Armstrong was buried in a Nudie suit, and that Nudie himself used to perform at the Grand Ole Opry in a “10-gallon yarmulke.”

He writes that Carl Perkins’s blue suede shoes can solve crimes and locate lost objects. He wonders if Willie Nelson’s “On the Road Again” might have been better with verses about “a persistent antibiotic-resistant dose of the clap that spread through the crew after a gig in New Mexico.”

He suggests that the Who’s “My Generation” is sung from the perspective of an 80-year-old man in a nursing home, that Ricky Nelson and not Elvis was the true ambassador of rock ’n’ roll and that Rosemary Clooney’s “Come On-a My House” is about a pedophile mass murderer. There’s an analysis of Bing Crosby’s version of Yale’s “Whiffenpoof Song.”

Sometimes you only hope he’s kidding. As other critics have pointed out, this book has a woman problem. Only four of these 66 songs are by women. There are weird arguments in favor of paying for sex (“It’s not perfect love, but it’s less problematic”) and plural marriage (he says women should partake as well).

Nearly every woman, in any song he mentions, is described by him as a “hellcat” or a “hot-blooded sex starved wench” or a “she goat” or a “foxy harlot” or a “vamp” or a “gold-digging showgirl” or “wolf-bait on mescaline.” To struggle to be fair to Dylan, in the universe of this book, and in most of these songs, the men the narrators confront are no better — sugarless daddies, jacks mistaken for kings. Their personal pronouns are burnt matchheads.

“The Philosophy of Modern Song” is nearly the size of a coffee-table book. It’s been art-directed to its back teeth. The photo researcher deserves all the best legal drugs for Christmas. It’s filled with vintage movie stills and Life magazine covers and car ads and pulpy detective images, some more clever than others, the kinds of things you might find on the walls of a self-consciously retro diner.

I respect the work that went into it, but the photos sometimes crowded me out. There should be two paperback options — one that resembles a small, flimsy prayer book, published without chic, that has no imagery at all, that looks like someone left it in the sun too long.

This is Dylan’s first book of new writing since “Chronicles: Volume One” appeared in 2004 and since he won the Nobel Prize in Literature in 2016. It’s dedicated to Doc Pomus, with special thanks to, among others, “all the crew at Dunkin’ Donuts.”

There’s no philosophy, not really, in “The Philosophy of Modern Song.” There is, offhandedly, a lot of learning on display. Dylan seems to know every outtake, every cover version and every performance on YouTube of each song he discusses.

My first impulse was to make a playlist of the book’s songs, but it’s already done, several times over, on Spotify. It should be listened to outside, with speakers wired in trees.

This book is about a genius recognizing unfiltered genius in others, when he can find it. Often enough it’s an argument for simplicity. “Enjoy your free-range, cumin-infused, cayenne-dusted heirloom reduction,” Dylan writes. “Sometimes it’s just better to have a BLT and be done with it.”