FEDORA, AT THE MET

Giordano’s verismo melodrama Fedora has only appeared in six seasons at the Met prior to the 2022–23 new production, but a succession of magnetic divas has made for some legendary performances.

Few singers in Met history could rival soprano Lina Cavalieri, the Met’s first Fedora, for personality and flair. Billed as “the most beautiful woman in the world,” Cavalieri’s career veered from the Folies-Bergère cabaret music hall in Paris to the stage of the Met before turning to silent films, where she was an early star in both Italy and the U.S. In Cavalieri’s two Met seasons, from 1906 to 1908, she was the company’s first Fedora, Manon Lescaut, and Adriana Lecouvreur.

Known more for her enchanting appearance than her rather mediocre vocal talent, she nevertheless captivated the public imagination, and, in particular, that of a young man of the socially prominent Astor family.

Her marriage to artist Robert Winthrop Chanler did not survive beyond their honeymoon, and she had him sign over most of his fortune to her in their divorce. The scandal may have ended her Met career, but she was soon off to Oscar Hammerstein’s Manhattan Opera, followed by a notable film career, before an air raid over Florence in 1944 brought her extraordinary life story to a dramatic end.

Cavalieri made her Met debut on December 5, 1906, as Fedora opposite the Met’s idol tenor Enrico Caruso. Their passionate Act II duet, “Vedi, io piango,” sealed with an ardent kiss, created such a sensation that it had to be repeated. Contemporary reviews confirm that the Love Duet continued to be encored at succeeding performances.

A reviewer for The New York Times found Cavalieri “a brilliant and fascinating picture upon the stage, of a beauty whose praises have not been exaggerated. … She has a strong dramatic instinct and knows how to gain powerful and moving effects. Her voice is not a great one.” Caruso’s “singing was superb and, at its best, of poignant and sweeping power.”

Like Puccini’s Tosca, Fedora is based on a visceral drama by Victorien Sardou, whose works were favored by famed fin-de-siècle actress Sarah Bernhardt. It is thus a natural vehicle for sopranos with big personalities and broad acting styles.

The Met’s second production of Fedora was mounted in 1923 for another glamorous soprano, the Viennese Maria Jeritza. Unlike Cavalieri, Jeritza was very much admired for her powerful, radiant voice—she would be the Met’s first Turandot and portrayed many of Wagner’s and Strauss’s most demanding heroines. Jeritza also had a penchant for melodramatic falls, an “acting” trope she employed in as many roles as possible. 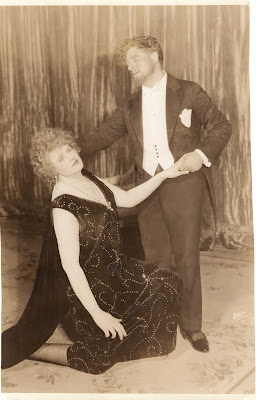 Her most famous moment was to be thrown to the floor by Scarpia in Tosca, so that she could sing “Vissi d’arte” from a prone position.

The public so adored this tour de force that it became a calling card gesture for her. The review of her Fedora by Bernard Rogers in Musical America observed, “Several of Mme. Jeritza’s falls in the last act were so realistically contrived that many in the audience must have marveled that she could manage to escape injury.”

Jeritza’s tenor partner was Italian Giovanni Martinelli, and the two “sang their lines with great warmth and tonal opulence and aroused a torrent of enthusiasm after the impassioned love scene and duet which closes Act II.” This second Met production featured “handsome and brilliant” sets by the noted Art Deco architect Joseph Urban.

Some seventy years passed from Jeritza’s last Fedora until the Met staged the opera again, this time with the Italian diva Mirella Freni. From her debut in 1965 as Mimì in Puccini’s La Bohème, Freni had charmed Met audiences.

For the first couple of decades of her half-century Met career, she was one of the Met’s most elegant lyric sopranos, singing roles such as Juliette in Gounod’s Roméo et Juliette, Micaela in Bizet’s Carmen, Susanna in Mozart’s Le Nozze di Figaro, Adina in Donizetti’s L’Elisir d’Amore, Marguerite in Gounod’s Faust, and Liù in Puccini’s Turandot.

Later, she successfully took on heavier parts such as Elisabetta in Verdi’s Don Carlo, Tatiana in Tchaikovsky’s Eugene Onegin, and the title roles of Cilea’s Adriana Lecouvreur and Puccini’s Manon Lescaut. Fedora would be her valedictory role at the Met. “Her voice remains full, rich and intensely expressive.

There are signs of wear, but the sense of line, varied coloring, and enveloping resonance of her singing harken to a tradition that may disappear with her retirement,” wrote Anthony Tommasini in The New York Times. Her Loris, tenor Plácido Domingo, sang with “clarion tone and thrilling power.” The production by Beppe De Tomasi was borrowed from Barcelona’s Gran Teatre del Liceu.

In summary, New York Magazine’s veteran critic Peter Davis observed, “two impassioned singers can still heat up a crafty, tune-filled melodrama like Fedora and tear the house down.” A video recording of the 1996–97 production with Freni and Domingo is available for viewing on Met Opera on Demand at www.metopera.org/on-demand.