The grotesquely large phallus belongs to the fertility god Priapus, a tragic figure in Roman mythology. 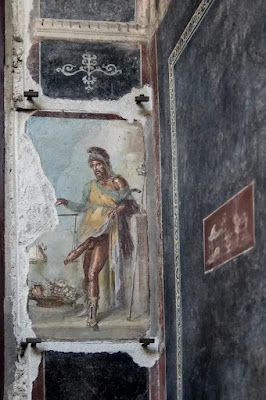 The image of fertility god Priapus weighing his penis is located near the entrance to the house (© Silvia Vacca; all images courtesy of the Archaeological Park of Pompeii)

Visitors to Pompeii can finally see one of ancient Rome’s most unsettling images — a fresco of the fertility god Priapus weighing his hefty penis on a scale balanced by a large bag of coins.

After 20 years of nearly uninterrupted closure to the public, the Archaeological Park of Pompeii announced the reopening of La Casa dei Vettii on January 10.

In Greek and Roman mythology, Priapus was the son of Aphrodite and Dionysis (though accounts vary). According to the legend, Hera cursed him with impotence in the womb because his mother was deemed more beautiful than her. Priapus was born with a grotesquely enormous penis he couldn’t use. He was permanently erect but helplessly impotent.

Other depictions of scenes from Greek and Roman mythology are strewn across La Casa dei Vettii, and they were likely used to show the homeowners’ status as cultured members of society. The image of Priapus in particular, which is located in the home’s entryway, was meant to broadcast the two freedmen’s wealth, according to the park.

“It’s all about saying, ‘We’ve made it and so we are part of this elite,’” Pompeii’s director Gabriel Zuchtriegel told the Associated Press.

La Casa dei Vettii has been closed to visitors since 2002, although the atrium and entrance hall were briefly reopened in 2016. The current restoration project began that same year. In a statement, the park described the undertaking as “one of the most complex archaeological heritage restoration projects of the last few decades.”

The Pompeii home was excavated in the late 1800s, and over the course of the following century, wax was painted over the frescoes in an attempt to preserve them. Removing the wax without damaging the underlying imagery proved difficult, but the home needed more structural repairs, too. A new roof was added, and among other massive projects, the team restored the water channels in the home’s 18-column peristyle, and replanted ancient flora back into the garden.

In June, a large example of ancient Roman graffiti was uncovered in England. It showed an image of a penis and read, “Secundinus, the shitter.” In August, archaeologists discovered an “unusually large” Roman-era stone phallus in southern Spain.