It is 100 years since archaeologist Howard Carter first peered into the tomb of the boy-king Tutankhamun, which had lain in darkness for more than 3,000 years. 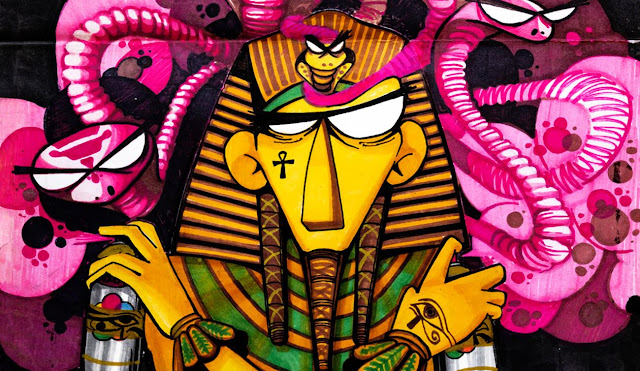 To mark the anniversary, the British Museum has commissioned a work by Egyptian graffiti artist Nofal O.

Nofal O – real name Ahmed Nofal (b. 1996) – has created many vivid street murals in Cairo influenced by Egypt's ancient art. In this powerful display, his graffiti, inspired by Tutankhamun and his treasures, has been painted directly onto the walls of the gallery, and stands in dialogue with a statue of the young pharaoh from about 1330 BC.

Tutankhamun's unexpected death, ending a short reign of around nine years (about 1336–1327 BC), limited his impact on ancient Egyptian history. However, the discovery of his almost-intact tomb in 1922 transformed him into the most famous pharaoh of them all.

The unprecedented find marked a turning point in our understanding of ancient Egypt and the previously obscure king became a household name. Objects found his tomb in the Valley of the Kings, including his world-famous blue and gold funerary mask, are part of the fabric of Egyptian identity, appearing on everything from bank notes to sweet tins.

Discover more about Tutankhamun's reign and legacy through seven stops across the Museum in the Tutankhamun: life and legacy trail, starting in Room 3.

This year also marks the bicentenary of the decipherment of hieroglyphs – follow the race to decode the Rosetta Stone in our highly acclaimed exhibition, Hieroglyphs: unlocking ancient Egypt, on until 19 February 2023.