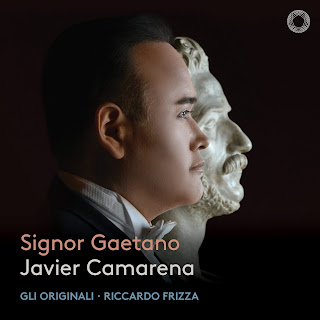 Besides famous excerpts from L’elisir d’amore, Don Pasquale and Roberto Devereux, this project focuses on hidden gems from rarely-recorded works such as Betly, Maria de Rudenz and Il giovedì grasso.

Camarena and Frizza’s exceptional sense of style is enhanced by the period instrument playing of Gli Originali. The recording took place at the Teatro Donizetti in the composer’s hometown Bergamo, as part of the yearly Donizetti Festival, of which Frizza is the musical director.

Javier Camarena is one of the most in-demand tenors of his generation, and one of the world’s leading bel canto specialists. Riccardo Frizza frequents major opera houses, was awarded the Best Conductor prize at the International Opera XXI Awards, and returns to Pentatone after having featured on The Three Queens (Donizetti) with Sondra Radvanovsky and Lyric Opera Chicago (2022).

Gli Originali was founded within the context of the Bergamo Donizetti Festival, and aims to revive the sound world of early nineteenth-century opera with period instruments and a historically-informed approach.