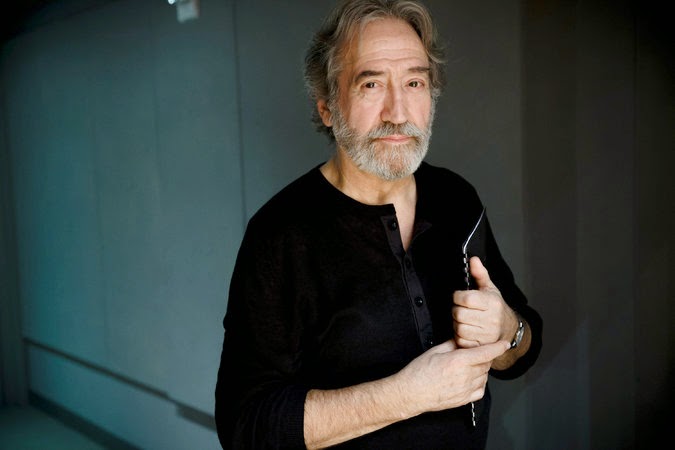 For the Catalan early-music master Jordi Savall, who has spent decades rediscovering works that had vanished for centuries, the most difficult aspect of the 2011 death of his wife and performing partner, the singer Montserrat Figueras, may have been the music that’s once again disappeared.
“It’s an important part of my repertory I had with my wife that we’ll never play anymore,” Mr. Savall, 73, said gently, in accented English, in an interview after a rehearsal at the Juilliard School in January. “Because I don’t think I will find another person who can do this music in a way that will support it. I don’t know any. I have nice singers, but I don’t have any singer that sings with the same spirit as Montserrat.”
Even with some of his music now closed off to him, Mr. Savall, professorial with a bushy beard and rimless eyeglasses, has remained prolific, focusing on projects that celebrate the great diversity — social, racial, ethnic — of world culture. A characteristic recent album, “Bal-Kan: Honey and Blood,” teased out the multiplicity of traditions in the Balkan region. 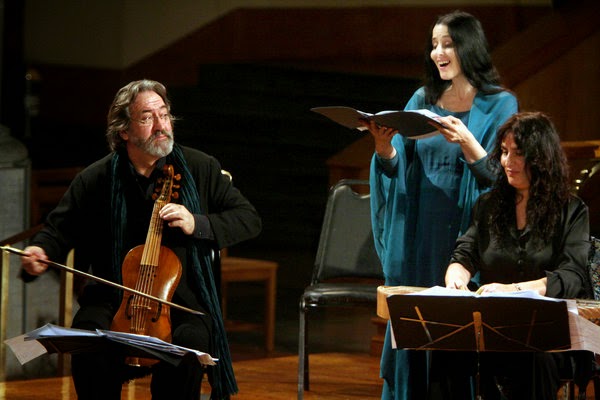 Mr. Savall with his wife, Montserrat Figueras, center, and Begoña Olavide in 2006. Credit Hiroyuki Ito for The New York Times

He is spending an unusual amount of time in New York in the first few months of this year, starting with his annual residency with Juilliard’s early-music ensemble, Juilliard415, which culminated in a concert of nature-inspired Baroque works on Jan. 31. A stirring player of the viola da gamba, a cello-like relative of the lute popular in the 17th and 18th centuries, Mr. Savall appears in solo recital at Carnegie Hall’s intimate Weill Recital Hall on April 13. On April 16, he leads his ensemble Le Concert des Nations in a program of 17th-century French music at Carnegie’s Zankel Hall. (Conspicuously missing are the plangent vocal works, like Monteverdi’s “Lamento della Ninfa,” that Ms. Figueras sang with peerless fervor.)
These Carnegie appearances are among the highlights of the hall’s sterling Before Bach festival, which begins April 7 and explores the period before the 1685 birth of that seminal composer. The series includes programs from groups like L’Arpeggiata, Pomerium and Les Violons du Roy before culminating with performances of Monteverdi’s Vespers of 1610 (April 31) and “L’Orfeo” (May 1) by the Monteverdi Choir and English Baroque Soloists, conducted by John Eliot Gardiner.
During the decades of ascendance for the movement that aimed to present music of this period in a historically informed way, advocates became known, perhaps unfairly, as a tad prissy. Instruments and bows had to be of a certain provenance or made a certain way, these revolutionaries declared.
Choirs had to be a certain size, tempos a certain speed. Original scores needed to be stringently observed. Intentions were good — many years of ill-informed decisions and neglect had to be reversed, after all — but a reputation for rigidity nevertheless developed: the rigidity of the convert.
“My generation was mostly made up of piano players who learned the harpsichord, or cellists who learned the gamba,” Mr. Savall said. “And we started most of the time at a certain part of life. But in the last 20 or 30 years, many young people start from 6 or 7 to play Baroque instruments.”
It was these kinds of musicians — the ones who grew up with a robust Baroque music scene as a fact of life rather than an aspiration — that Mr. Savall worked with during his residency at Juilliard. For evidence that times had changed since the strictness of the 1960s or ’70s, one could witness him telling two student flute players in the ensemble for Telemann’s “Water Music” that they should join in the “tutti” sections, even though the original score had given the part solely to two oboists. 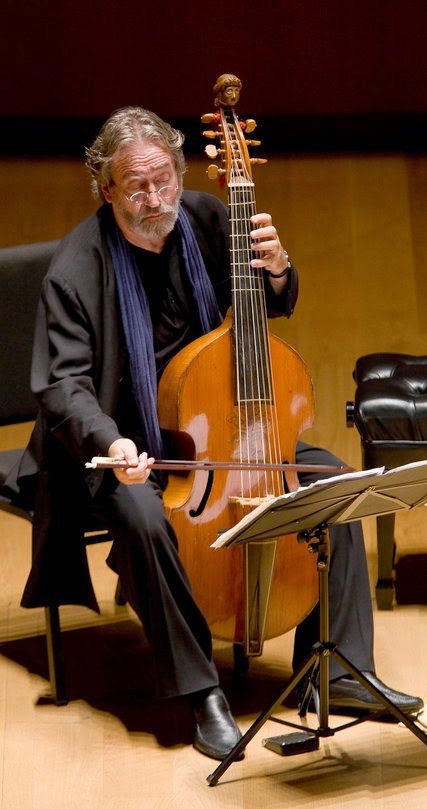 Mr. Savall at the Morgan Library & Museum in 2011. Credit Jennifer Taylor for The New York Times

“In the historical context, there were just two players,” he said from the podium in his soft — really barely audible — voice. “But it’s illogical to have you here and not playing.”
Bending the intentions of the composer to meet the resources in front of you: This may have been mildly blasphemous when the early-music movement was beginning. But flexibility is now the norm, and Mr. Savall’s ethos has always been uniquely wide-ranging and open-minded, with a repertory that stretches through centuries and across much of the known world.
With five decades as an instrumentalist, conductor and impresario under his belt, Mr. Savall has long been an eminence, but he has lately become a true elder statesman. He caused a stir in October when he refused Spain’s prestigious National Music Award, quoting Dostoyevsky in a long open letter that faulted the government’s austerity policies and its “dramatic disinterest and grave incompetence in the defense and promotion of art and its creators.”
In the interview in January, he added: “It’s very hard now in Spain, and in Europe in general. Because it’s hard, we need to do not so much, but do it very well. In difficult times, what you cannot do is waste. The problem is there’s little communication between the political and cultural world, and the situation in Spain is so disastrous. I think Spain is a country that turns its back on its musical heritage.”
His rejection of the award comes as Mr. Savall is increasingly considering his legacy and beginning to prepare his disparate but interrelated ensembles — including Le Concert des Nations, Hespèrion XXI and La Capella Reial de Catalunya — and the record label he founded, Alia Vox, to continue without him. It is a similar weaning strategy to that being pursued by William Christie, 70, the founder and director of the early-music ensemble Les Arts Florissants.
“It’s very easy to sell concerts when I’m conducting, but what happens when I’m not?” Mr. Savall asked. “We have a foundation, and what I will do in the next years is sometimes do concerts with other young musicians who will conduct instead of me. And this year, for the first time, Alia Vox will do a recording of a young group, without me.” 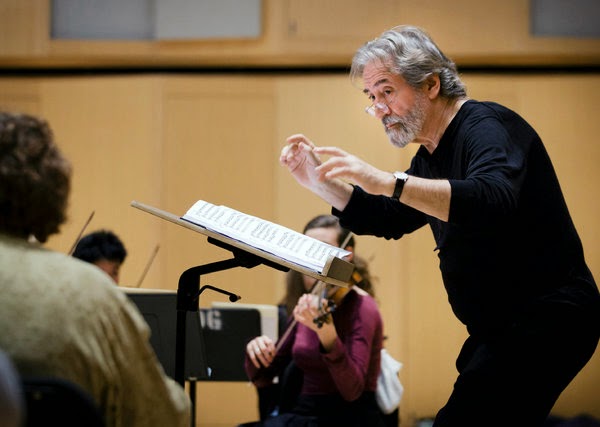 Born in 1941 in Igualada, west of Barcelona, Mr. Savall began as a child singer. It wasn’t until he was 15 that he first picked up a cello, but when he did, it was a revelation. “For the first time,” he said, “I understand the phrase from Mark Twain: ‘There are two important moments, the day you are born and the day you discover why you were born.’ ”
He moved on, before too long, to the gamba, then an exotic instrument that happened to have important advocates in Catalonia. “The language for Baroque music was not my language,” he said. “So I did a very simple thing. I practiced every day many hours. Just reading. No ideas. When you go to a country and start to speak, slowly the language becomes familiar, and then at a certain point it’s part of you. It’s not something you learn intellectually — you learn making music.”
He joined Enric Gispert’s ensemble Ars Musicae Barcelona as a gambist, and through the group met Ms. Figueras. The two moved to Switzerland to continue their studies in Basel and married in 1968. In 1974, Ms. Figueras and Mr. Savall, along with the musicians Lorenzo Alpert and Hopkinson Smith, formed Hespèrion XX, which took the name Hespèrion XXI in 2000.
Emphasizing the music of 16th- and 17th-century Spain but often veering well beyond it, the group brought to its concerts a vibrant mood that seemed both carefree and carefully controlled. After returning to Spain from Switzerland in the late 1980s, Ms. Figueras and Mr. Savall founded La Capella Reial de Catalunya, a vocal ensemble, and Le Concert des Nations, an orchestra that uses instruments from the 17th century.
Mr. Savall’s schedule these days is filled not just with copious tours of pre-existing programs but also with the development of new projects. One, focused on Islam, will stretch musically from Afghanistan to India and China and back west again, via Morocco and Mali. Another travels the slave routes from Africa to the Americas, and yet another is designed to accompany the art of El Greco.
He has recently completed “War and Peace,” an album and accompanying book that relate the history of the 17th century and its brutal conflicts. (This was the time of the Thirty Years’ War and the Hundred Years’ War.) Music from Sephardic Jewish, Ottoman, German, Italian, French, Spanish and English traditions will come together in a seething mixture demonstrating how cultures intertwined long before contemporary globalization. “It’s a reflection on this crazy world,” Mr. Savall said.
He has also recently taken to concertizing with his children, Arianna and Ferran, who are both musicians. But until a few years ago, he appeared most often with Ms. Figueras, whose smoky voice had piercing emotional power.
“The first year or two years were very difficult, because when I was returning home I would see all my books and think, ‘What am I doing here?’ ” he said of the time after her death. “But then I understood really the impermanence. We will all die one day, and that is something we are not prepared for. And it’s important to realize life is not existing without the death. Montserrat, she lived 69 years in plenitude, singing until the last days, and I think this is already a fabulous thing, no?” 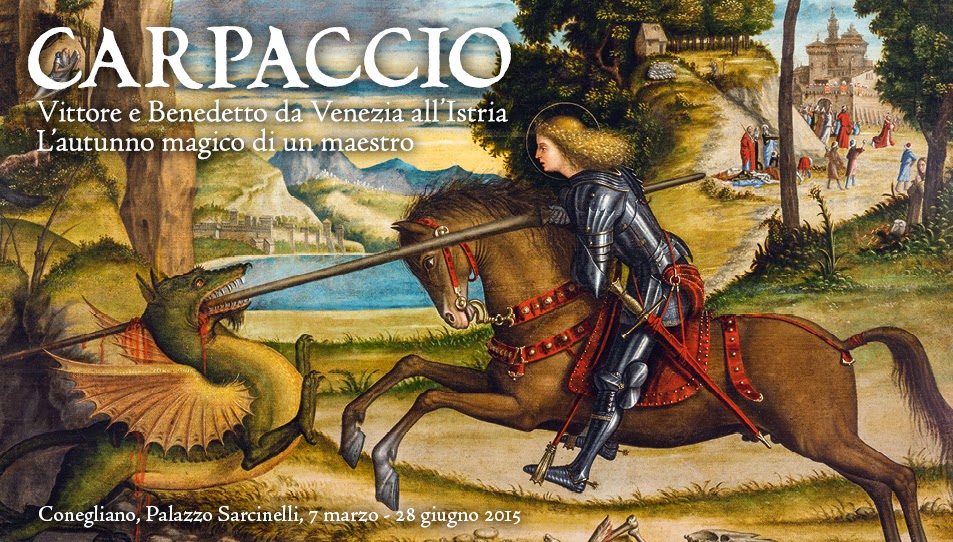 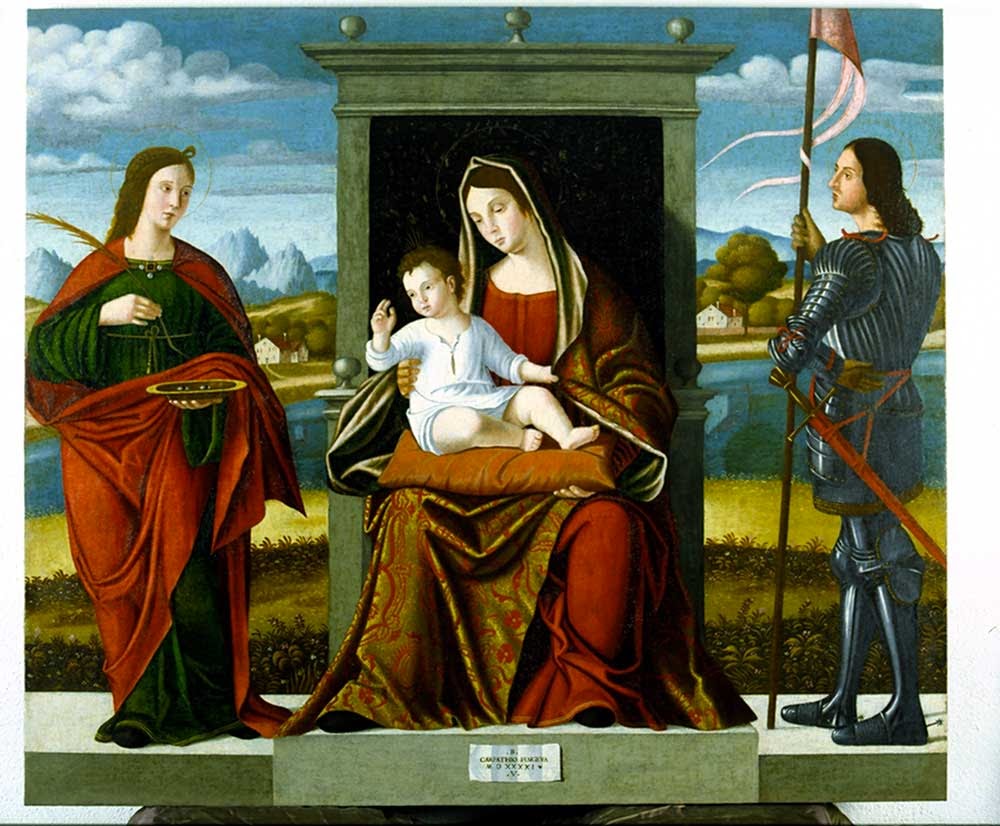 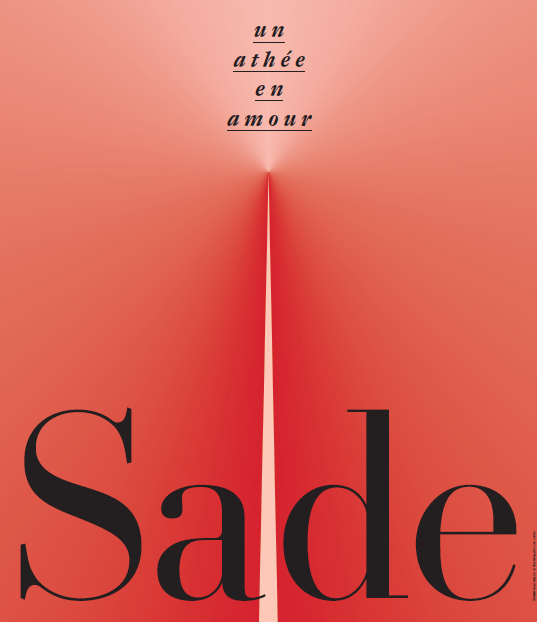 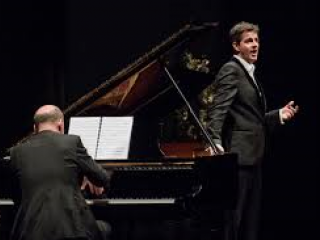