THE CERVANTES’S SISTERS: THE FEMALE WRITERS OF SPAIN’S GOLDEN AGE

The exhibition Wise and Valiant: Women and Writing in the Spanish Golden Age rescues nearly 30 women from historical oblivion in a display of over 40 manuscripts and publications.
Lauren Ford 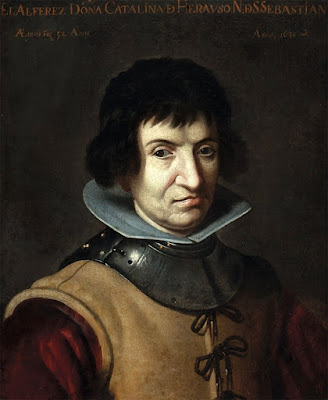 MADRID — In Miguel de Cervantes’s Don Quixote, the lovelorn Cardenio famously asks, “What man can pretend to know the riddle of a woman’s mind?” Cardenio had a point: while Cervantes, Lope de Vega, Francisco de Quevedo, and other men were defining Spain’s Golden Age with their poetry, prose, and plays, most Spanish women were illiterate and stuck at home or educated in cloistered convents. It was hard to know what 16th- and 17th-century Spanish women were thinking because so few españolas had ways of articulating themselves. Now an exhibition sheds light on the extraordinary but overlooked women who not only spoke their minds, but published them, too.

They may not be memorialized by statues and street names, but hundreds of Spanish women wrote and printed their thoughts in Cervantes’s time. Wise and Valiant: Women and Writing in the Spanish Golden Age rescues nearly 30 of them from historical oblivion in a display of over 40 manuscripts and publications — most of which have never previously been shown publicly — that span poetry, history, biography, diaries, letters, plays, novels, and travel books. The exhibition is available online in Spanish and English, a format well-suited to this dense, delicate material, and to Wise and Valiant’s history-expanding ethos.
The Golden Age wasn’t so golden for women. In Spain and its colonial territories, society was dominated by the Catholic Church and family honor, and the second-class status of women was considered divinely ordained and socially necessary. Popular manuals like Fray Luís de León’s La Perfecta Casada (The Perfect Wife) (1583) declared that God weakened women’s intellect so that they could dedicate themselves to their domestic and religious duties. And since female movement and sexual behavior threatened the rigid, racist caste system in the Americas and the hereditary privileges of the Iberian Peninsula, women throughout the Spanish empire were tightly controlled. Most were kept away from the public sphere, and few received formal education.

But there was one place where women could explore the world of the mind: the convent. Around 80% of female writers of the Spanish Golden Age were nuns. Convents required a lifelong commitment to confinement, but paradoxically, were also islands of relative intellectual freedom for the women cloistered inside. Afforded a “room of one’s own,” nuns were empowered to read, write, and even publish their works. Their special spiritual status could sometimes even soften strict social and political boundaries to the outside world. For example, in her 22 years as Felipe IV’s spiritual advisor, the Franciscan abbess María de Jesús de Ágreda (1602–1665) (author of 14 works and one of the Catholic Church’s most renowned mystics) advised the king on such secular matters as national finances, troop movements, and quelling domestic unrest.
Of course, it was still 16th- and 17th-century Spain, thus women’s voices were largely unwelcome outside the convent walls. To get around this and gain the go ahead from her mother superior and church authorities, an aspiring writer-nun peppered her texts with declarations of humility and apologies for her lack of skill and audacity to write at all. Exhibition curator Ana M. Rodríguez-Rodríguez, a specialist in early Spanish literature, says that these obstacles actually propelled nuns’ literary innovation, inspiring works “full of silences that speak louder than words.” Several of the women featured in the show were threatened by the Inquisition, and nuns who proved too bright or controversial were silenced. Marcela de San Féliz (1605–1687), the daughter of the celebrated Madrid poet and playwright Lope de Vega, developed an extensive body of literary work after entering a convent at age 16. She eventually destroyed nearly all of it under the “guidance” of her male confessor.

The exhibition’s most recognizable figure faced a similar fate. Born near Mexico City in 1648, Sor Juana Inés de la Cruz was a star of Spanish colonial intellectual life and today is considered an anti-authoritarian and protofeminist. “Despite knowing that a nun’s life implied many repugnant issues for my character, I decided to become one,” she said, and joined the Hieronymite order at age 21 after a stint at the capital’s viceregal court. Fluent in Latin, Nahuatl, and Spanish, Sor Juana’s worldly poetry, music, and plays, along with her pursuit of science and mathematics, got her in trouble with the church throughout her life. The year before she succumbed to the plague in 1695, Sor Juana renounced her intellectual life, humbly signing a penitential document “Yo, la peor de todas” (“I, the worst of all women”).
Not all nuns stayed cloistered. Catalina de Erauso’s (1585–1650) autobiography begins with an escape from a Basque convent followed by decades of vagabonding and soldiering across the Americas dressed as a man. There, Erauso wooed women and killed ten men, including her/his own brother. (At the beginning of the memoir, the author refers to herself/himself in the feminine, but then uses the masculine for the majority of the account). After various stints in prison, Erauso evaded a death sentence by revealing her/his “sex and virginity,” and was later granted permission to continue dressing in men’s clothing by Pope Urban VIII. The story sounds far-fetched, but the exhibition presents various materials that corroborate elements of Erauso’s account. Known as La Monja Alférez (The Ensign or Lieutenant Nun), Erauso proudly took part Spanish colonial wars against Indigenous populations in South America. Her/his memoir evidences the complexity of gender and the brutality of imperialism during Spain’s Golden Age.

The Golden Era continues to be one of Spain’s most culturally emblematic periods: Even today, nearly every Spanish home contains a copy of Don Quixote. And although the Biblioteca Nacional de España’s BIESES (Bibliografía de escritoras españolas) online database contains the names of over 500 female writers who worked in the 16th and 17th centuries, most of these women’s lives remain unknown to us, and their works have barely survived the centuries. Still, their imagination, depth, and resilience continue to resound.