Covid, what havoc have you wreaked?  So many performances have been postponed, so many substitutions made. At times, it’s been joyous and amazing to see the stars of the future step convincingly into roles at little or no notice. And, at times it’s brought back great established soloists who we might not have seen again so soon. Last night’s Cavalleria Rusticana and Pagliacci double bill was a mixture of both.  With Jonas Kaufmann still recovering from Covid, the leading tenor roles in Cavalleria Rusticana and in Pagliacci were replacements. But, what a treat we had in store.

Turiddu was picked up by Seokjong Baek, whose stellar debut as Samson at the ROH stunned us just a few weeks ago. The first substitute for Pagliacci was Fabio Sartori, but he was also unwell and instead, Robert Alagna, a name I would have travelled to see in the role, was on stage. The female leads too were substitutions with Polish Soprano Aleksandra Kurzak performing brilliantly to sing both Santuzza in Cavalleria Rusticana and Nedda in Pagliacci. Had it not been for the publicity covering the changes, I would have been writing about the brilliant casting. But, these two operas followed each other with star substitutions as miraculous as a rabbit from a magician’s hat.

This production of both operas is by Damiano Michieletto and was first staged at the Royal Opera House in 2015. In Micheieletto’s version, Cavalleria Rusticana begins at the end with Turiddu surrounded by villagers, dead on the stage and his off-stage ghost singing “O Lola ch’ai di latti la cammisa”. The setting, a Sicilian village, feels authentic – verismo opera at its most powerful, the kind of spot you might stumble upon driving through Sicilian countryside. When first staged, it was critically acclaimed and it’s lost none of its edge today.

Details like the processional Virgin which hauntingly comes to life and ignites Santuzza’s guilt, the tense bread making from Mamma Lucia (Elena Zilio) and the shiny motor driven by Alfio (Dimitri Platanias) draw the audience into that kind of village life where this tale of love and death might just have happened. When Turiddu left for war, Lola (Aigul Akhmeshina) abandoned him and married Alfio. A Russian mezzo-soprano and 2017/8 Jette Parker Young Artist, her characterisation was as convincing as her honeyed vocals. 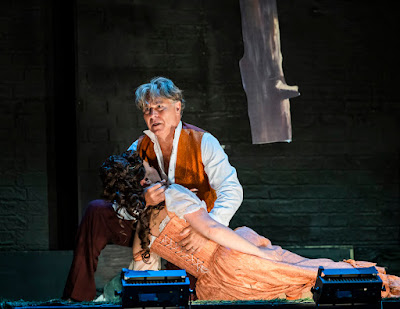 The resurrection hymn is one of the highlights of Cavalleria Rusticana. Santuzza, stricken by grief, has realised that her husband, Turiddu is having an affair with his previous lover Lola. It’s Easter and she leads the chorus and children’s choir singing ‘Inneggiamo, Il Signor non e morto’. When Turiddu appears, Santuzza scolds him but clearly wants to forgive him. But Lola’s voice is heard in the distance singing carelessly.

When she appears at the entrance to the church, Santuzza refuses to go in and implores Turiddu to stay. But, Turiddu follows Lola and when Alfio appears, Santuzza tells him what has happened. As the charming and handsome lead, Seokjong Baek is utterly convincing and his vocal range impressive. His roots as a baritone bring a warmth to his lower vocal tones, but his upper range is mellifluous and pure.

The intermezzo is music that many of us recognise. While it’s a short piece of music, around 3 minutes, it’s one that has been used in a number of films, including Raging Bull and The Godfather part III. In context, it’s a moment for the audience to reflect, draw breath and wonder what will happen next. It builds emotionally with lilting phrases that imply a calm before the storm.

As the villagers leave the church, Turiddu and Lola are in high spirits. When Alfio appears, clearly angered, the women of the village usher Lola away. Challenged to a duel by Alfio, Turridu bites into Alfio’s ear – the duel will be to the death………..