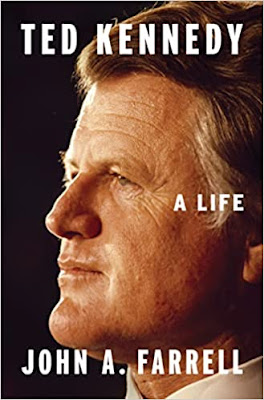 by John A. Farrell

“Ted Kennedy: A Life” is John Farrell’s just-released biography of the youngest son of Joseph P. Kennedy.  Farrell is a former correspondent for The Boston Globe who has written biographies of Tip O’Neill and Richard Nixon (a Pulitzer Prize finalist and my favorite biography of Nixon among the twelve I read during my journey through the best presidential biographies).

Edward Kennedy (1932-2009) was the youngest of nine children and presumed to be the least likely of the four sons to achieve success or sustain the Kennedy brand. Although famously flawed, Ted was elected to the US Senate at the age of 30 and spent the next forty-seven years mastering its intricacies and advocating for social justice. He was the third longest-serving US senator in American history.

Like Farrell’s biographies of O’Neill and Nixon, this biography of Ted Kennedy is thoughtful, lively and engaging. And despite its 593 pages of text the narrative always moves briskly – rarely covering a topic to the point of exhaustion. While comprehensive, it is less a detailed exploration of Kennedy’s political and personal lives than a meritorious introduction to his political career and review of his personal flaws.

Farrell is a sympathetic biographer, but this is no fawning hagiography. The narrative unflinchingly exposes Kennedy’s numerous self-inflicted flaws including his negligence in Mary Jo Kopechne’s death, his failures during the ensuing cover-up, his shameless womanizing and boorish behavior and his alcoholism. At times, Farrell’s critique is delivered with a softer touch than Kennedy probably deserves.

There are many high points in this book. Among them: excellent background relating to what it meant to grow up “a Kennedy,” a touching look at Ted’s emotional state following the deaths of his brothers, a multi-chapter examination of Chappaquiddick, a revealing exploration of the Kennedy-Carter relationship and an engaging account of his presidential run in 1980.

But readers seeking the ideal combination of insight and readability will find this book imperfect. First, its fast-flowing narrative proves a double-edged sword. The narrative avoids burdensome detail, but there is often a feeling of skimming the tree-tops at the expense of richer context and deeper insight. (But anyone desiring a more detailed treatment of Kennedy’s life can turn to Neil Gabler’s gargantuan series on Kennedy – volume two is due out in 36 hours.)

This brisk walk through Kennedy’s life also minimizes personal moments involving Kennedy’s first wife and his children, particularly when they aren’t central to his legislative career. His divorce from Joan, for example, goes almost unnoticed.

Finally, readers without much background in history will not find much assistance here. Farrell includes just enough context to hold the story together; topics such as Watergate, Vietnam and the Cold War receive surprisingly little direct attention. And, strangely, there is virtually no insight into Kennedy’s view of fellow Massachusetts politician Michael Dukakis or his own race for the presidency.

Overall, John Farrell’s biography of Ted Kennedy is an enjoyable and interesting journey through the life of the “Lion of the Senate.”  It is best for someone seeking a comprehensive introduction to Kennedy without too much detail (and who is already broadly familiar with the events of his era). For others, this biography is likely to prove solid but not fully satisfying.