When Spanish artist Abel Azcona first presented España os pide perdón (Spain asks for your forgiveness) at the Museo de Arte Contemporáneo de Bogotá in 2018, he couldn’t predict that just two years later, a sweeping protest movement would take the streets to demand the dismantling of systemic racism and colonialism around the world. Unexpectedly, Azcona’s piece, which places posters displaying the words “España os pide perdón” in public spaces like art museum facades, in the middle of streets, and on building ruins, found its historic moment. As the Black Lives Matter marches erupted in the United States and beyond, Azcona decided that 2020 was the right moment to expand his ambitious installation and conceptual piece across Latin American cities.
As Azcona watched statues of Confederate leaders and European conquistadors get torn down, he became convinced that the time had come for Spain to finally apologize for its colonialism. “We should not be afraid of going to the essence of the problem,” said Azcona. Known as Spain’s enfant terrible for his biting works critiquing some of the country’s most controversial issues, he believes it is critical to understand how Spain’s violent past has rippled into the present. “When we offer an apology it is not only for the genocidal act of invading countries and exterminating a percentage of its population, but also for its long-term legacy,” he said. “We know that’s where patriarchy and extreme Catholicism come from.” 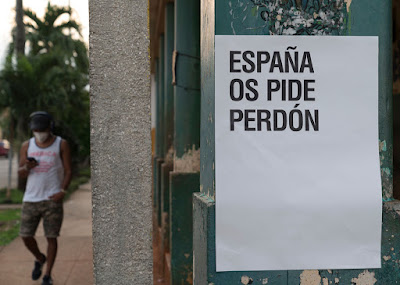 Abel Azcona, installation view of España os pide perdón in Havana, Cuba, 2020. Courtesy of the artist.
España os pide perdón has now become a collaborative project, where artists from over 20 Latin American cities so far have volunteered to place the posters in their countries of residence. The plan is to continue the installation’s journey through more cities until 2022. So far, the project includes Havana, Cuba; Mexico City, Mexico; Lima, Peru; Caracas, Venezuela; Buenos Aires, Argentina; Santiago de Chile, Chile; Guatemala City, Guatemala; Montevideo, Uruguay; La Paz, Bolivia; Panama City, Panama; Tegucigalpa, Honduras; Santo Domingo, Dominican Republic; and Quito and Cuenca, Ecuador. Each group of collaborators has the freedom to decide exactly where to place the posters, often using strategic public spaces like historic monuments.
The ephemerality of the posters are preserved through photographs, which are widely shared on social media. By engaging both physical and online spaces, Azcona conceptualizes the piece as a collective performance where the audience becomes an active participant every time someone reacts or comments in real life, as well as on the internet.
In these spaces, Azcona’s work acts as a catalyst and prompts audiences to engage in sensitive conversations they might not have otherwise. Reacting to España os pide perdón, thousands of Spanish Twitter users have rejected Azcona’s indictment of Spain, questioning his right to offer an apology for the nation’s conquests.
“There is no feeling of guilt, it’s just the opposite,” said Laura Villa, assistant professor of Spanish at Queens College, City University of New York. “The vast majority of Spaniards, not only the alt-right conservative groups, feel proud of the conquest.” According to Villa, this dominant opinion is based on the idea that Spain “brought civilization and the language and now we are a great, united nation.”

Every October 12th, Spain celebrates a national holiday, known as the “Fiesta Nacional,” which glorifies a sanitized version of the conquest with no critical examination of what it meant for colonized peoples. This whitewashed narrative is one of the founding myths of the modern Spanish nation. According to Villa, the colonization of the Americas, along with Catholicism and the persistence of the monarchy are the three integral factors upholding Spanish nationalism. Ultimately, Azcona’s work seeks to expose the complexities of political and cultural landscapes where controversial historical issues remain swept under the rug, creating space for difficult conversations about Spain’s role in the colonization of the Americas. “Azcona’s work is perceived as offensive and gets dismissed as disrespectful, instead of being considered as a contribution to public debate,” said Villa.
The son of a prostitute, and a survivor of sexual abuse as a child, for Azcona, asking for forgiveness has a meaning beyond Spain’s Christian associations with atonement. “As someone who lived through a very difficult childhood, forgiveness, like a hug, is the kind of thing that helps you heal, and you can keep living thanks to that,” he said. Azcona’s traumatic life experiences have informed his artistic practice to an extreme—he recently announced that he will terminate his life at a predetermined time and date as his final work of art.
Cuban artist Alejandra Glez, who, despite COVID-19 restrictions, coordinated the display of España os pide perdón in Havana, Cuba back in May, begged Azcona not to execute his last performance—at least not yet. With respect for the artist’s wishes, once the pandemic is over, Glez aims to present Azcona’s installation at the Havana Biennial.
Glez said she received conflicted feedback from her Spanish friends and followers for her collaboration with Azcona. Responding to those who were offended, she simply said, “this installation is about what marks the before and after in our History.”

Ever the iconoclast, Azcona and his collaborators seem to be insisting on opening up a conversation that neither Spain nor Latin America seem to be fully ready, or willing to fully engage in just yet. “This project is irritating for both sides, because it’s late for the apology and it’s not enough for all the damage that was caused,” said Azcona. “There should be reparations, and everything that was stolen should be returned. I wanted to create a project that makes all sides upset, but then have a debate.”