Since about the 1970s, a new and largely post-vernacular Yiddish culture has started to develop in many, often unexpected, locales around the world. A related visual aesthetic now seems to be emerging. 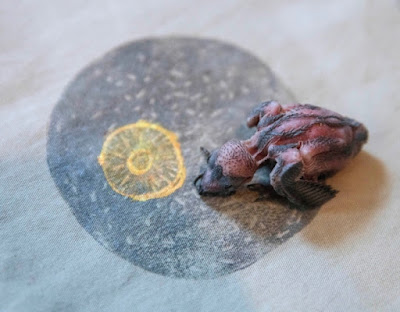 Since about the 1970s, a new and largely, what the historian Jeffrey Shandler terms, a “post-vernacular Yiddish culture” has started to develop in many, often unexpected, locales around the world. This phenomenon exists in parallel to and as a continuation of the surviving secular Yiddish culture that descended from pre-War culturati circles of Vilnius, Warsaw, Moscow, New York, and elsewhere.

This new Yiddish culture was created by a post-World War II generation of Jewish and non-Jewish artists and academics who (re)discovered and (re)learned the Yiddish language and employed it for cultural production — mostly music, theater, and literature — as the medium and the message. It came into maturity in the era of identity politics in the 1990s and 2000s. The avant-garde of this culture is post-modern, hybrid, progressive, humanist, and intersectional. This new Yiddish culture welcomes contemporary subjects and forms formerly considered taboo (e.g. non-heteronormative gender and sexuality) while maintaining the long-standing commitment of the historically secular Yiddish culture to equality and social justice. This intersectionality opened up spaces for queer yiddishkeit, such as the African-American Yiddish work of Anthony Russell which combines African American spirituals and the music of Jewish Eastern Europe, and the staging of “Waiting for Godot” in Yiddish in New York by the New Yiddish Rep in 2013, among many other examples.

The new Yiddish culture has evolved from the tribal culture of the tight-knit Eastern European Jewish community and their descendants, to an open culture, welcoming creators from different backgrounds and paths in life and working with multitudes of subjects and forms.

I propose we consider “Yiddish contemporary (visual) art” as any contemporary art piece — contemporary painting, works on paper, installation, photography, video, sound, performance art, new media, social practice, etc. — that are consciously produced by the artist as a project of this new Yiddish culture. This art can either directly employ the Yiddish language, form, subjects, themes of Yiddish/Eastern European Jewish culture or be situated in less straightforward relation to them. Works of Yiddish contemporary art have an intentional and knowable connection to the languages and cultures of Eastern European Jewish communities, in dialogue with languages and cultures of their neighbors and the world at large.

The Chicago-based artist Shterna Goldbloom maps the difficulties and complexities of bridging her Jewish and LGBTQIA identities. Her work focuses on the experiences of queer Jews coming from traditional Orthodox communities who had to negotiate or are still negotiating their sexual orientation and gender identity within the tenets and practices of Haredi Judaism. 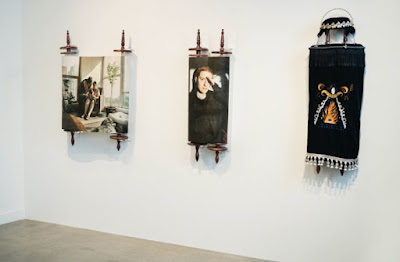 Goldbloom’s project Feygeles uses the Yiddish slur for “gays” as its title, which literally means a “little bird.” According to Goldbloom, the title “expresses both the queerness of these Jews and their “flight” from the communities they had to leave to accept and realize their sexual gender identities and to their new communities of choice. Feygeles “aims to make visible that which has historically been hidden” because queer Jews have always existed and yet traditional Jewish communities refuse to acknowledge that history or the presence of queer Jews in their communities today.

The contemporary Torah scrolls in the Feygeles installation are handmade and include photographs of and interviews with queer ex-Orthodox and Orthodox Jews “who have struggled to find ways of integrating their history and family traditions with their sexuality and gender.” Each scroll is unrolled to a different degree, mirroring the different levels of openness of the subjects’ identities. The photographs of the subjects who are not openly LGBTQIA are kept shielded and concealed in closed Torah scrolls. Some portraits are shown partially, while others are fully and proudly displayed. 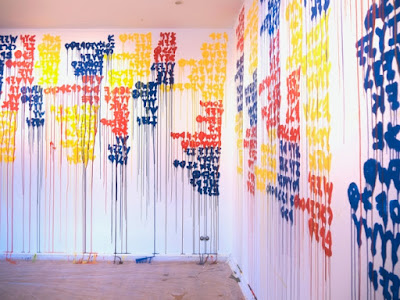 Ella Ponizovsky-Bergelson, who was born in Moscow and grew up in Israel, works in hybrid calligraphy and is interested in “what happens to words and sentences when you change the language or the alphabet” as in her “Among Refugees Generation Y,” a piece of calligraphy on a wall in the Neukölln district of Berlin where Yiddish, Arabic, and German languages pervade.

Ponizovsky-Bergelson’s work in “Di farbloyte feder | Berliner zeydes” is based on the Yiddish poem “A papirene brik” (“My Paper Bridge”) by Kadya Molodowsky (1894–1975) who emigrated from Poland to the United States in 1935. In this house-paint-on-a-wall piece, Ponizovsky-Bergelson renders Molodowsky’s text in ancient Hebrew script in vibrant primary colors, a radical gesture given the standard monochromatism of post-Holocaust Jewish-themed art that addresses the destruction of the Ashkenazi civilization in Europe.

According to Ponizovskiy-Bergelson in an interview with Ekaterina Kuznetsova in Geveb: A Journal of Yiddish Studies: “If we are bringing Yiddish back to life, to the present and the future, it is better to do it in color to break the stigma and to get rid of this very sad and tragic black and white picture.” Painting/writing the poetic text of Molodowsky (who wasn’t religious), using ancient Hebrew script that evokes the dawn of Judaism is a statement about the 20th-century, Eastern-European Jewish trauma that suddenly rendered the once lively and vibrant early-20th-century Yiddish secularism antiquated and exhausted.

The work by Arndt Beck, who was born in Berlin in 1973, in “Di farbloyte feder | Berliner zeydes,” combines images from documentary photos of early-20th-century, European-Jewish life with Yiddish text, both rendered in decisively vibrant colors. As in the case of Ponizovsky-Bergelson’s work, the use of color in Beck’s work violently clash with or subvert the pre-conceptions of a sense of loss being appropriately conveyed by grayscale imagery, a typical trope of early-20th-century documentary photographs depicting pre-Holocaust Jewish life.
Beck’s works propose another type of remembrance: an exuberant and carnivalesque one that can ensure the continuation of Yiddish culture in new and existing, yet unexpected forms. The Yiddish text in Beck’s works comes from Yiddish poems by Moyshe Kulbak (1896–1937) and Avrom Sutskever (1913–2010) connected to Berlin and Yiddish literary history in the city. Some of these poems have never been translated fromYiddish until Beck engaged them in his artwork. This includes Sutskever’s “Brandenburger tor” (“The Brandenburg Gate”) or his diary documenting his journey to the Nuremberg Trials in 1945–46. Beck’s contemporary art practice is, in fact, part of his multi-faceted Yiddishist culture work, where he acts as an organizer, translator, and creator for the course of Yiddish. 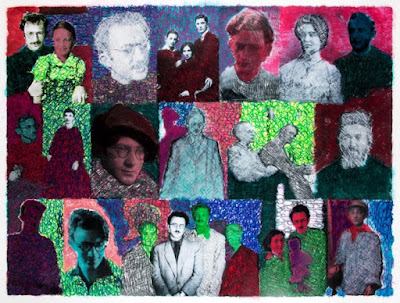 Canadian artist and researcher Avia Moore is a Yiddishist who is a maker, producer, scholar, and dance leader. Moore’s practice is performance and Yiddish dance and movement, but she often collaborates on research projects, films, documentaries. Her performative, research-based practice and its rootedness in the Yiddish text is exemplified in her ongoing project “Letter Angel,” which began in 2006 based on a drawing by Sarah Horowitz and an image of a girl navigating her way through the aleph-beys (Yiddish alphabet) as a metaphor of a journey into Yiddish culture. This project mainly consists of performative explorations, sometimes documented in photo and video projects. “Letter Angel” was also explored through image, prop-making, text, and music in trace, including Moore’s solo work (from movement explorations to photography, to crafting) and ensemble work (movement, music, writing, photography), also art books. According to Moore, “Letter Angel” is at bottom about how we carry our “identities on our bodies” and “on our skin.” 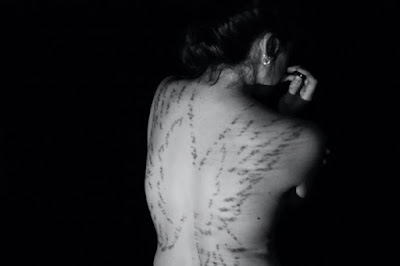 The forms of Yiddish contemporary art are linked to forms representing the life of Yiddish culture today. They are of various degree of religiosity, assimilation, connection to “the old home”, and political commitment.

It strives for the equilibrium between particularism and universalism. It is migrant, diasporic, and global. It is representational, modernist, monumental, ephemeral, participatory, and performative.

The colors of Yiddish contemporary art are exquisite, its forms are refined, and its lines are trembling.

Editor’s Note: A previous version of this article left out analysis of the artist Shterna Goldbloom. It has now been updated to include her.