Joe Biden, 77, and California Senator Kamala Harris, 55, will appear together for the first time since the announcement in Wilmington, Delaware on Wednesday
The event comes as Biden made history by announcing he will be running with the first black woman to appear on a major party's presidential ticket
Following the reveal, the campaign saw its biggest ever one-day fundraising haul
ActBlue, the Democratic Party's main donation platform saw more than $10.8 million in donations flood in following the announcement Tuesday evening
Trump immediately bashed the pick, calling Harris 'nasty' and 'mean'
He said Wednesday, however, the she is the type of vice presidential opponent that 'everyone dreams of!' 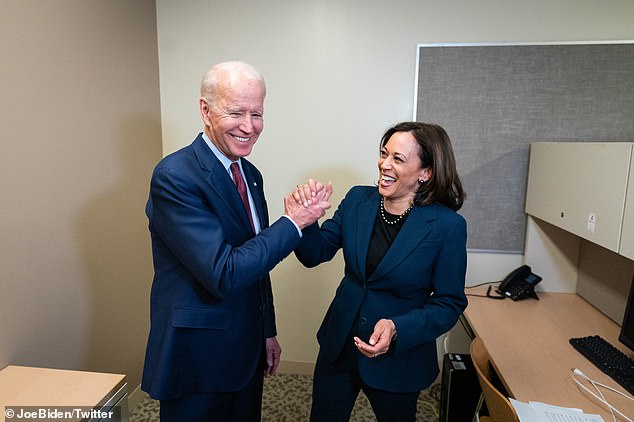 'Kamala Harris started strong in the Democrat Primaries, and finished weak, ultimately fleeing the race with almost zero support,' Trump tweeted Wednesday
Biden, who spent eight years as President Barack Obama's vice president, has been weighing who would fill that same role in his White House for months
He pledged in March to select a woman as his vice president
A woman has never served as president or vice president in the United States
oe Biden and Kamala Harris will appear on Wednesday afternoon together in Wilmington, Delaware less than 24 hours after the presumptive Democratic nominee finally announced the California senator as his running mate.

The duo will deliver remarks from Biden's home state on the tailcoats of his campaign's biggest fundraising night ever.

Biden's announcement Tuesday night ignited the biggest hour of online fundraising of his campaign as millions of dollars gushed into the campaign's pocket.

Although the former vice president's campaign did not disclose how much it raised on Tuesday night alone, ActBlue, the main donation platform for Democrats, reported it saw more than $10.8 million in donations flood the site between 4:00 p.m. and 8:00 p.m.

According to an estimate, Tuesday was ActBlue's fifth largest fundraising day ever.

Later Wednesday night, Harris, 55, and Biden, 77, will also take part in a virtual grassroots fundraiser to bring in even more funds off of Biden's announcement that he will be running with the first black woman to ever grace a major party's presidential ticket.
President Donald Trump expressed Tuesday shock over Biden's VP pick, pointing to the times the California senator labeled Biden as 'essentially racist.'

He also called Harris 'nasty' and 'mean' at his press conference Tuesday evening and his campaign released a one-minute attack video that also labeled her as 'phony.'

Trump, however, revealed at the briefing that Harris would have been his 'number one pick', if he were to be given a choice over who he and Vice President Pence would most like to face off against this coming November.

'@KamalaHarris started strong in the Democrat Primaries, and finished weak, ultimately fleeing the race with almost zero support,' Trump tweeted Wednesday morning. 'That's the kind of opponent everyone dreams of!'
In an interview on Fox News Sunday night, the president continued to rail against Biden's choice.

'She was one of the people that was projected to have a chance at winning. All she did as people got to know her, she went down. She finished at 2%, probably less than that and she fled. Remember how quickly. She said horrible things about Biden,' Trump told Fox News' Sean Hannity. 'She made terrible statements. She essentially called him a racist. And other things that were very bad.'

Shortly after the news broke, Trump revealed that he was 'a little surprised' given her 'very poor' primary performance.

'She did very very poorly in primaries, she ended up right around two per cent,' Trump noted.

'She was very disrespectful to Joe Biden. It's hard to pick someone that was that disrespectful,' Trump continued referring to a moment in the Democratic debates last summer.
'When she said things during the debates, during the Democratic primary debates that were horrible about Sleepy Joe, I would think you would not have picked her,' Trump said, slipping in an insult against his chief rival.

But despite his surprise, Trump said that Harris would have also been his pick in order to secure victory and a second term in the White House.

'She was my number one draft pick. She was the one I thought would be the best for us.'
The president told reporters that Harris was 'about the most liberal person in the U.S. Senate.'

'I would have thought that Biden would have tried to stay away from that a little bit,' he said.

In choosing Harris, Biden is embracing a former rival from the Democratic primary who is familiar with the unique rigor of a national campaign.

The first-term senator, who is also of South Asian descent, is one of the party's most prominent figures. She quickly became a top contender for the No. 2 spot after her own White House campaign ended.

In announcing the pick, Biden called Harris a 'fearless fighter for the little guy, and one of the country's finest public servants.' She said Biden would 'unify the American people' and 'build an America that lives up to our ideals.'

Harris joins Biden at a moment of unprecedented national crisis. The coronavirus pandemic has claimed the lives of more than 160,000 people in the U.S., far more than the toll experienced in other countries.

Business closures and disruptions resulting from the pandemic have caused severe economic problems. Unrest, meanwhile, has emerged across the country as Americans protest racism and police brutality.

Trump's uneven handling of the crises has given Biden an opening, and he enters the fall campaign in strong position against the president.

In adding Harris to the ticket, he can point to her relatively centrist record on issues such as health care and her background in law enforcement in the nation's largest state.

Trump leveled the insults from the White House podium, taking on a vice presidential choice Democrats embraced in part because of her experience on the television stage after vowing to 'prosecute' Trump.

'She was very nasty, – one of the reasons that surprised me, she was probably nastier than even Pocahontas to Joe Biden,' Trump said, using the slur he often attaches to Sen. Elizabeth Warren of Massachusetts, another contender.

Trump also brought up her blasts at Brett Kavanaugh during his Senate confirmation hearings for the Supreme Court.

'I thought she was the meanest, the most horrible, most disrespectful of anybody in the U.S. Senate' toward Kavanaugh, who faced accusations of rape during his confirmation hearing, which Kavanaugh denied.

Trump also called her a 'person who's told very many stories that aren't true,' and made repeated efforts to tie her to the 'radical left.'

Trump was much higher on Harris when he got asked about her just days ago on July 29th, when she was already in the news as a potential pick. 'I think she'd be a fine choice, Kamala Harris, she'd be a fine choice,' Trump said at the White House.
His campaign steered clear of the same harsh personal attacks in a press call with reporters that mostly focused on ideology, although the campaign only allowed for two questions before ending it.

Sen. Marsha Blackburn on the call accused Harris of being for sanctuary cities and 'open borders,' but notably did not repeat Trump's accusations of Harris being mean and nasty.

The attacks from the White House podium came after Biden  selected as his nominee the former rival who delivered the most cutting attack of the 2020 nominating process – a fellow member of the Senate 'club' who accused him of working with segregationists and opposing school bussing.

It was a dramatic moment it did not take the Trump campaign long to recall. Team Trump blasted out a web video shortly after her selection calling Harris a 'phony' and 'attacking Joe Biden for racist policies.'

It also sought to cast her as part of the 'radical left,' although one reason Biden may have selected Harris is her record as a former California attorney general, potentially blunting attacks on any nominee.
The video flashed an image of Harris' performance in a a debate, where Harris knocked Biden back with her attack.

A Trump campaign text called her 'Phony Kamala,' using her first name only, an indication that may be the insult Trump seeks to brand her with.............