BEFORE THERE WAS VOGUE 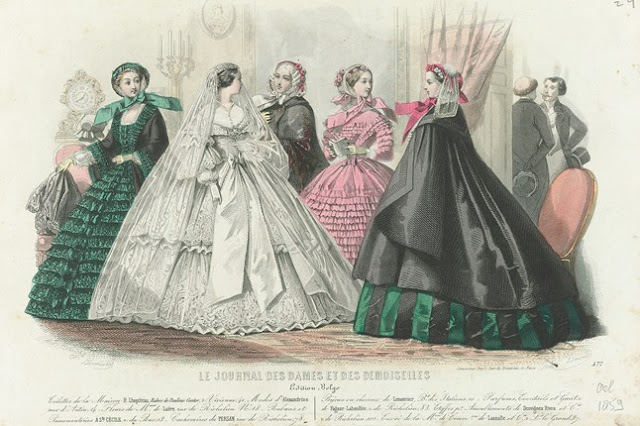 He wore a plumed hat, a coat with ballooning sleeves, frilly pantaloons and fancy boots.She balanced a chiffon headpiece above a voluptuous ribbon-bow bodice with a full skirt that spread over an entire sofa.
Well, it was the extravagant Eighties. The 1680s, that is - just before all the frills and froufrous were swept away, along with Louis XIV's orgy of excess.
I saw that flash of the French Revolution's history - which can be viewed as far more than a passing fashion trend - in Amsterdam's Rijksmuseum where New for Now (until September 27) opens eyes and minds to history seen through pencil and paint.
The vogue for costume drawings - before there was Vogue - has produced a handsome and informative exhibition, which proves that you don't need wild showmanship nor dramatic sets to bring fashion to life.

A line of green, growing bush of Podocarpus - a hint of playful sexual hide-and-seek games - is planted down the middle of a room by exhibition designer and co-curator Christian Borstlap where the stories of changing fashion and lifestyle are framed in the detailed drawings that preceded magazines.
The later names from the early 20th century are well known: for example Georges Barbier, Raoul Dufy and Georges Lepape, whose illustrations all appeared in the French Gazette du Bon Ton in the early 20th century.
Throughout the former centuries of fashion illustration, each artist created the same type of tiny world that you would find on willow-patterned plates. By that, I mean that clothes were always drawn in the context of a flirtatious walk in the park or in a transformed home setting.
For example, a post-French Revolution woman in 1801 sits in her high-waisted, simple dress in a Napoleonic chair, sketching a figure of a Grecian statue.
These worlds-within-a-world make the exhibition far more dense and fascinating than might be expected in entering the two large rooms with their tiny wall hangings.
Behind New for Now and its study of the origin of fashion magazines is a donation to the Rijksmuseum from two separate families - the Raymond Gaudriault Collection and the MA Ghering-van Ierlant Collection of 8,000 drawings collected during the 20th century, when the photographic lens pushed illustrations out of fashion.
Curator Els Verhaak and Wim Pijbes, the museum's general director, both thanked the donators. But these art lovers could surely never have expected how dramatic their collections could be as a display.
Men, seen in the eighteenth century, their fancy pyramid wigs above frock coats festooned with gilded decoration, had their fancy clothes cut down to size and sense far earlier than women.
For another hundred years after men embraced sartorial simplicity, female wigs, bonnets and floral circles were still heading outfits with crinolines or bustles.
In the exhibition catalogue, the pictures show the dramatic switch from the status quo of high society to liberation. It closes with a 1921 illustration by Andre Edouard Marty of a woman in a Paul Poiret dress, as she opens windows on the wide world. Its caption reads: un peu d'air - letting in fresh air. 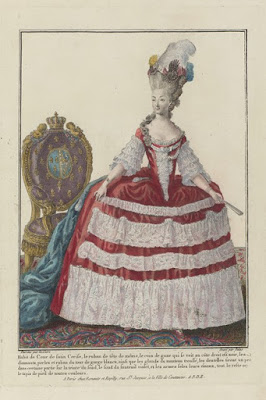 Marie Antoinette in court dress of cherry silk with a pointed bodice, a skirt with wrinkled strips of lace a long train and decorated with diamonds, pearls feathers and ribbon. She has bracelets on her wrists and in her left hand a closed folding fan. The armchair had a coat of arms and crown on the back. Engraving Creator: Patas, Charles Emmanuel Le Clerc, Pierre Thomas Esnauts & Rapilly Etching, engraving (printing process) hand colors
Picture credit: Rijksmuseum

I was struck by the spirit of this show of tiny pictures. They seemed impregnated with the wind of freedom. It blew first over the courtiers in their overwrought costumes.
But the real liberation was for women, as they moved from elaborate interiors to the sea shore, to salt spray, boats and freedom.
In retrospect, the early figures in gardens also expressed a yearning for a freedom that later grew into van Brock's gouache-coloured engraving of women in a park with decorative parasols in 1916.
In one way, these illustrations were the last drumbeat of drawing before the invention of the camera made that medium "new for now". And the collaboration with current fashion illustrators Piet Paris and Quentin Jones brings the exhibition up to date.
But the Rijksmuseum has done the fashion world a service by showing the source of so much of fashion's visual energy which later impregnated Vogue and other glossy magazines.