An archaeologist says he may have found evidence that Nefertiti, the former Queen of Egypt, is secretly buried inside Tutankhamun's tomb.

The whereabouts of Nefertiti's remains are not known, although those of Tutankhamun - who may have been her son - were found in 1922.
New tests have shown there may be a portal leading from King Tut's tomb.
Nicholas Reeves, an archaeologist at the University of Arizona, says he believes Neferiti may lie inside.
One leading Egyptologist urged caution over the conclusion but said that, if confirmed, it would be "brilliant".
The finds were made last year, after the Spanish artistic and preservation specialists, Factum Arte, were commissioned to produce detailed scans of Tutankhamun's tomb. 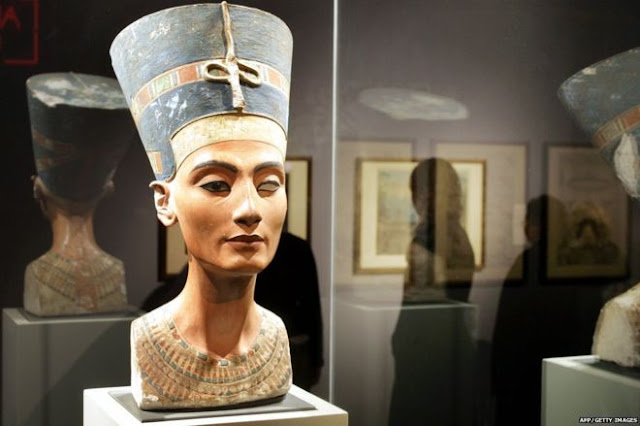 The scans were then used to produce a facsimile of the tomb near the site of the original Valley of the Kings in Luxor.
While assessing the scans last February, Dr Reeves spotted what he believed were marks indicating where two doorways used to be.
"I have been testing the evidence ever since, looking for indications that what I thought I was seeing was, in fact, not there," Dr Reeves told the BBC.
"But the more I looked, the more information I found that I seemed to be looking at something pretty real." 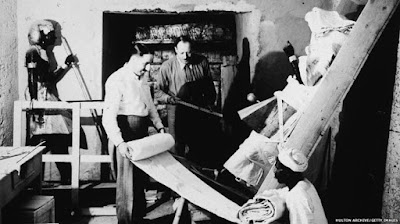 The layout of Tutankhamun's tomb has been a puzzle for some time - in particular, why it was smaller than those of other kings' tombs.
Dr Reeves believes there are clues in the design of the tomb that indicate it was designed to store the remains of a queen, not a king.
"If I'm wrong, I'm wrong," he said. "But if I'm right, the prospects are frankly staggering. The world will have become a much more interesting place - at least for Egyptologists."
The tomb of Tutankhamun was almost intact when it was opened in 1923
After being discovered by English archaeologist Howard Carter in 1922, the tomb of Tutankhamun was opened in February the following year.
It was the most intact Egyptian tomb ever discovered, and very few objects appeared to have been plundered.
Close to 2,000 objects were found, and it took archaeologists nine years to catalogue them all.
If the same amount of objects were found elsewhere in the tomb, it would represent "quite a coup," said Dr Reeves.
Neither Egyptian authorities nor Factum Arte have responded to the claims.
"I think there are certainly some signs that there might have been some activity around those doorways," said Joyce Tyldesley, an Egyptologist with the University of Manchester.
"Whether we can deduct from that that we actually the burial site of Nefertiti might be a step too far.
"But if it was true, it would be absolutely brilliant."