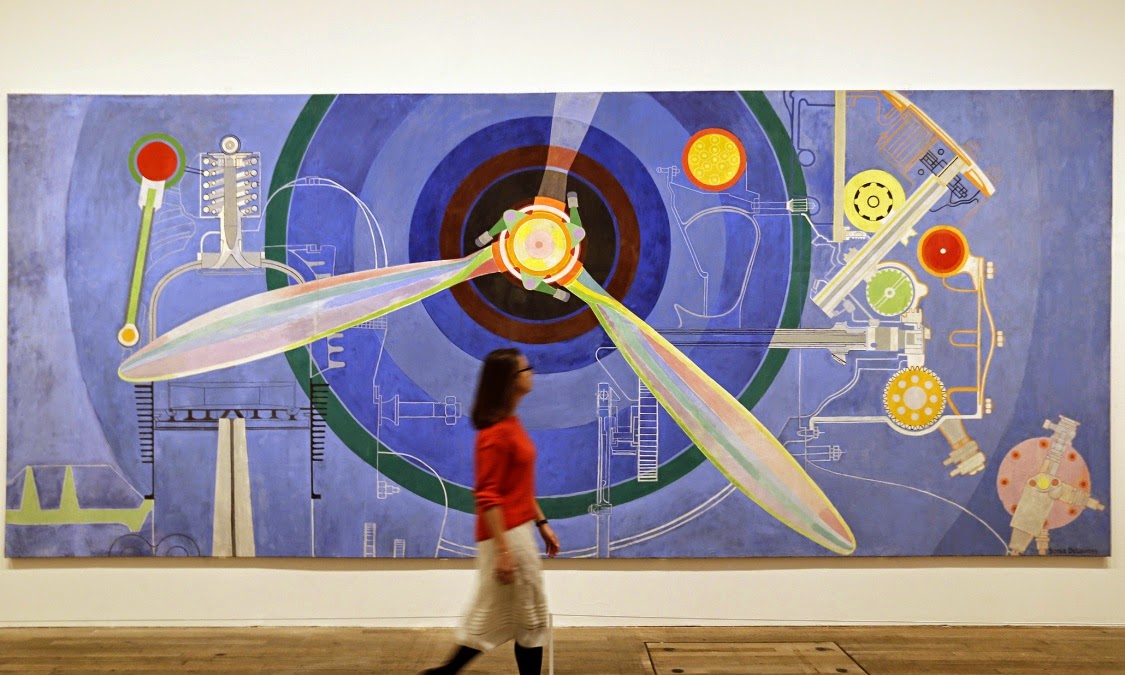 From knitted swimwear and bright ballgowns to the pure colour and rhythm of her paintings, the nonstop invention of abstract pioneer Sonia Delaunay feels timeless

A bathing suit, a lampshade, six evening coats and a pair of chevron-striped shoes edged with gleaming silver leather – never have such creations appeared in the high-art purlieus of Tate Modern before. But never has a show been devoted to a woman like Sonia Delaunay. A pioneer of abstract art, Delaunay (1885-1979) drew no distinction between painting and design, and this show respects that continuity, flowing seamlessly between high-chrome canvases, eye-popping gowns for Dada parties, and swaths of linen printed in vivid geometric patterns that look the very squeak of chic even today.
That timelessness is one of Delaunay’s strongest attributes. She seems perpetually modern, always in tune with the times as the 20th century progresses. Born Sarah Ilinitchna Stern to a poor Jewish family in Odessa, she was adopted by a rich uncle, renamed herself Sonia Terk and was educated all over Europe. In Germany she studied alongside Schoenberg; in Paris she met Braque and Picasso, and married the gallerist Wilhelm Uhde who showed the works of Gauguin, Derain and the fauves. 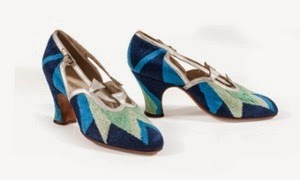 And it was in Paris, after her first show with Uhde, that she met the young abstract painter Robert Delaunay, whose semi-cubist series of the Eiffel Tower, in brilliant primary and secondary colours, are so intensely familiar from a million Metro maps and posters. They married, and together invented simultanism – an art of pure colour, modulated by rhythm, contrast and geometry. It is no disrespect to say that there is very little difference, at times, between her paintings and his.
Advertisement
The look is simple and immediately recognisable: circles and half-circles, rainbows, sheaves of stripes, triangles and radiating haloes all keyed up in paint-box colours. Sometimes she weaves figures into these open geometries – flamenco dancers, nightclub drinkers – and sometimes the image seems to celebrate the experience of living in Paris, as in the Electric Prisms series, with their bright vortices and beams. But mainly the paintings are bright, smart, unswervingly abstract and quite amazingly consistent.
Delaunay only stops painting when history intervenes – the first world war, the aftermath of the Russian Revolution, the rise of Hitler, when the couple escape France for Spain and Portugal and money is tight. But each time she resumes. Delaunay paints this way right through her husband’s long illness and eventual death in 1941, and right up until her own. It is a lifelong commitment.
But whether the principle is aesthetic or pragmatic has often seemed hard to judge, and this first British survey doesn’t make things any easier. Of course Delaunay is a classic modernist, in a sense, sweeping away the distinction between art and life in the half-century of constructivism, suprematism, the Italian futurists with their coffee cups and cars, the Bauhaus with its bespoke carpets and cabinets. But what is so striking, as you pass through this show, is her outstanding work ethic. Her passion for sewing abstraction into the fabric of everyday life becomes a foray into branding (her signature, and her look, on everything from cushions to headscarves). She needed to make a living for her family, and she did. 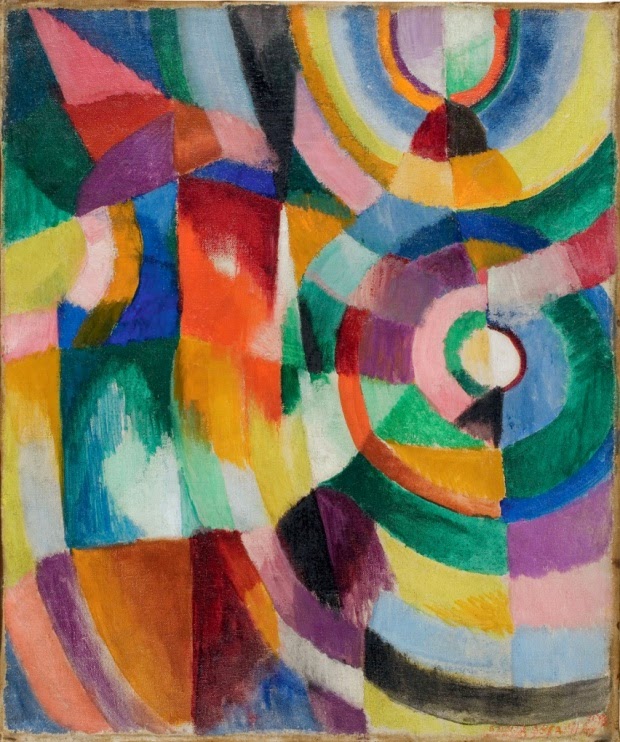 In Madrid, in 1918, Delaunay started a shop called Casa Sonia selling spectacular two-colour coats, embroidered shoes, striped ballgowns that fizzed like op-art paintings long before their time (think Vivienne Westwood in the King’s Road in the 80s). She decorated nightclubs, designed bee-striped umbrellas and knitted swimming costumes that were as impractical as they were modish. She was a colour-blocker long before anyone else. She worked for Zenith Watches and Le Rêve gas stoves, designed fabric for Metz & Co in Amsterdam and Liberty in London. Her home became a showroom (or a three-dimensional collage, in the curators’ preferred parlance) and her studio turned into a shop.
Anyone interested in the history of textile and costume design will surely find themselves seduced by the gorgeous piebald coats and harlequin jackets hand-stitched by Russian seamstresses, by the yards of exquisite fabric bearing her fabulous rectilinear designs, which can balance three stripes of different blues against one black and two red like a perfect melody. Her fabrics are trenchant, suave and characteristically dynamic; it is well said that her best students were the original designers of the Scandinavian clothes company Marimekko. 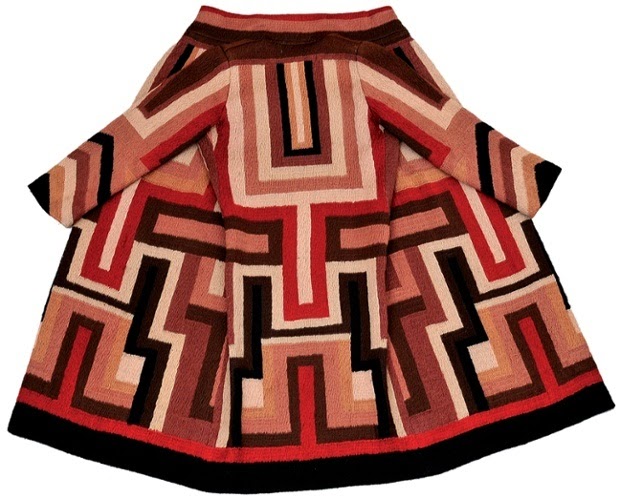 But the commonplace about Sonia Delaunay appears wrong on the evidence of this show. Her look does not translate equally well into crayon, gouache, linoprint, fabric, oil and furniture. It does not suit a wooden box as well as a flowing tunic for Diaghilev’s Ballets Russes. And though the enormous murals made for the Palais de l’air at the 1937 Paris international exhibition are outstandingly vibrant in their lemon, red and orange discs against an expanse of cobalt blue ether, they lose force on such a scale and revert to stiff drawings of dashboards. Delaunay is at her best when most fluid and intimate.
The embroidered coat made for Gloria Swanson is a tour de force of flying chevrons in coral, ochre and burnt umber, perfectly tailored to the film star’s body. And with the poem-dresses, stitched with the verses of surrealist writers such as Tristan Tzara and Philippe Soupault, Delaunay made words move and shimmer round the room. In one of the earliest works in this show, from 1913, she painted a single long scroll of abstract motifs, one flowing into the next, alongside the text of a poem by Blaise Cendrars imagining a train journey from Moscow to China. His words are piquant enough, but it is Delaunay’s painting – fragile, blithe and modest, bowling fluidly along through graceful peaks and sunlit passages – that really takes the mind on its journey.