"NO SPACE, JUST A PLACE", IS AN INVITATION TO TRANSFORM THE ABSTRACT FORM OF THE SPACE AS A SIMPLE GEOGRAPHICAL LOCATION, INTO A PLACE, AN EMBODIED FORM ACTIVATED BY HUMAN EXPERIENCE.

전시 소개
No Space, Just A Place is an invitation to transform the abstract form of the space as a simple geographical location, into a place, an embodied form activated by human experience. 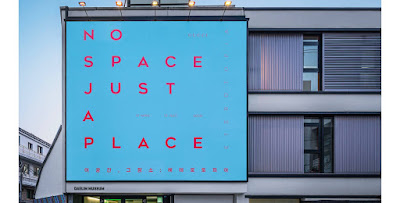 No Space, Just A Place is a large-scale exhibition organized at the Daelim Museum to showcase the work of 10 independent art spaces from Seoul together with five artworks from Korean and international artists.

No Space, Just A Place is a multi-layered project built to support the rich cultural landscape and the contemporary art scene in Seoul. Drawing from the ancient concept of PROXENIA, it seeks to formulate a new definition of the ‘being together’ while not being one thing.

Myriam Ben Salah (b. 1985, Algiers, Algeria) is a Tunisian-French curator and writer based in Paris.

Myriam Ben Salah led special projects and public programs at Palais de Tokyo from 2009 to 2016, focusing especially on performance art, moving image and publishing initiatives. Recently the Guest Curator of the 10th edition of the Abraaj Group Art Prize in Dubaï (2018) Myriam Ben Salah worked with winning artist Lawrence Abu Hamdan on a large scale commission. In 2016, she was a Curator-in-Residence at Fahrenheit in Los Angeles, and her recent projects encompass exhibitions, screening series, and performances organized at prominent international institutions including Lazaar Foundation in Tunis, the ICA in London, Beirut Art Center, Kunsthall Stavanger, Kadist Foundation in Paris and San Francisco, Pejman Foundation in Tehran, DESTE Foundation in Athens. Myriam Ben Salah is currently the Editor-in-Chief of Kaleidoscope Magazine, and also co-edited F.A.Q., a periodical image-only magazine with artist Maurizio Cattelan, as well as FEB MAG, the publication of the Underground Museum in Los Angeles. Her writings have appeared in numerous international art publications and catalogues including Artforum, Mousse, Numéro. She sits on the jury of Beirut Art Residency, SAM Art Project in Paris and the Onassis Foundation Residency in Athens. She was part of the curatorial committee selecting emerging artists for Artissima (Turin) and is currently working on the Hammer Museum ‘Made in LA’ Biennial to open in 2020.