Archaeologists at the Museum of the Sea in Santa Pola say the collection of 13 amphorae were Roman artifacts “of great heritage value” that date back to the first century.
Hakim Bishara 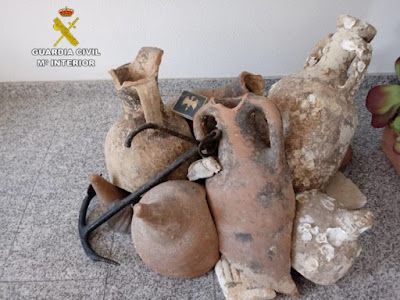 Civil Guard officers in the Spanish city of Santa Pola in the province of Alicante were conducting a routine food inspection at a frozen seafood shop when they came upon a rare archaeological discovery: 13 Roman amphorae that date back to the first century and an 18th-century metal anchor were on casual display.

“The agents saw various ceramic amphoras in different parts of the installation, a metal anchor and an engraved limestone plaque – all of which, at first glance, appeared to be of some considerable age,” the Spanish Civil Guard (Guardia Civil) said in a statement.
According to local media reports, the vendor’s son says he found the items while fishing and brought them back to decorate his father’s seafood shop. The two are now being investigated by local law enforcement authorities. 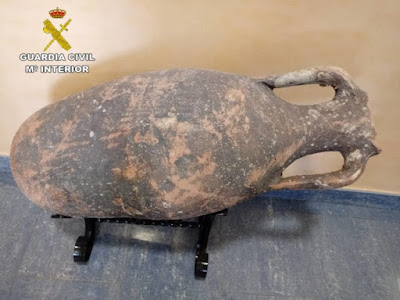 The artifacts were moved to the local Museum of the Sea for an evaluation. According to the Civil Guard, archaeologists at the museums determined that all 13 ceramic vessels were Roman artifacts “of great heritage value” that date back to the first century. One of the items was deemed exceptionally significant, “due to its exclusivity.”

The Civil Guard suspects that the amphorae could have been looted from shipwrecks. If that is determined as the origin of the vessels, the vendor and his son could face charges of “crimes against historical heritage” and possession of illicit artifacts.