REMEMBERING BOSNIA AND HERZEGOVINA: 25TH ANNIVERSARY OF SREBRENICA MASSACRE IS A SOMBRE WARNING FROM HISTORY

Ahead of the 25th anniversary of the massacre in Srebrenica when more than 8,000 Bosnian Muslim men and boys were killed by the Bosnian Serb Army in what was a designated UN “safe area”, Amnesty International’s Balkans Researcher Jelena Sesar said: 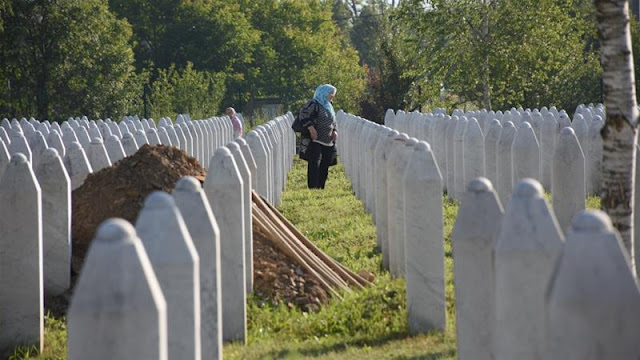 “As the world remembers those who lost their lives in Srebrenica and shows solidarity with survivors, it is wholly unacceptable that families of more than 1,000 victims are still searching for their remains. The truth about the fate of their loved ones has been buried for a quarter of a century making it hard for them to find peace or some measure of closure.

This sombre anniversary also marks 25 years of struggle to secure justice, truth and reparation for survivors, including victims of wartime rape and sexual violence

More than 8,000 Bosnian Muslim men and boys were killed after the Bosnian Serb Army attacked Srebrenica, a designated UN “safe area”, on 10-11 July 1995, despite the presence of UN peacekeepers.

In 2017, the International Criminal Tribunal for former Yugoslavia found Mladić guilty on 10 of 11 counts, including genocide and persecution on ethnic and religious grounds of Bosnian Muslims and Croats, as well as extermination, murder, deportation and other inhumane acts.

While the bodies of more than 7,000 victims of the Srebrenica genocide have been exhumed, identified and buried, more than 1,000 people are still missing or their remains awaiting recovery and identification.

Despite high-level prosecutions of some principal architects of the war in Bosnia and Herzegovina, including Ratko Mladic and Radovan Karadzic, there is still a huge backlog of cases pending before courts in the country.
11 July is the European Union’s official day of remembrance for the victims of the Srebrenica genocide.