WHAT’S SO HARD ABOUT PAINTING SHAKESPEARE?

Many paintings of Shakespearean scenes feel mawkish or literal-minded, flat-footed or lacking in emotional depth.

Michael Glover
Johan Zoffany, “Thomas King as Touchstone in ‘As You Like It’” (1780), oil on canvas, 91 x 55.5 cm, the Garrick Club, London (image courtesy of the Garrick Club)
Some weeks ago Stig Abell, the editor (until this week) of the London-based TLS (formerly known as The Times Literary Supplement), told us in his weekly diary what an enriching solace the words of Shakespeare were proving to be in these difficult lockdown days. 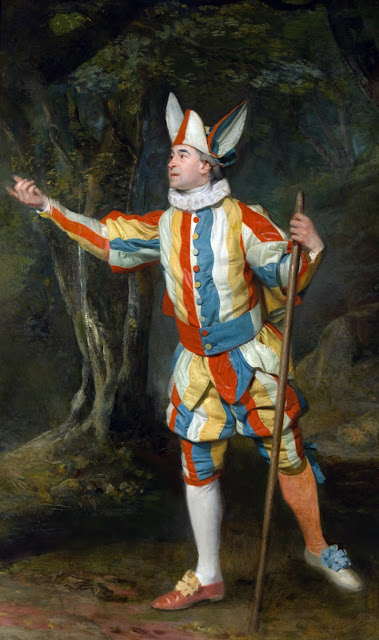 The playwright, albeit 400 years dead, was a peerless “companion to isolation,” giving “resplendent voice to our current preoccupations.” Stig then quoted Hamlet, who “could be bounded in a nutshell and count myself a king of infinite space, were it not that I have bad dreams,” and also King Richard II, who has been “studying how I may compare/this prison where I live unto the world.”

Stig’s grave ruminations on the subject of the consoling force of Shakespeare’s words concluded in a great poetic-cum-rhetorical drumroll of an outburst:

Provided we have a framework and context for our experience, provided there are words to speak, things have not quite reached the point of despair. Shakespeare always provides us with the resource of necessary language.

My goodness! Forsooth! I found myself saying, springing high-spiritedly out of my lockdowned chair.
Yes, I recognized in what Stig wrote — both in the praise itself and in the terms he used to express it — how much he, a mere plodder of a man of the 21st century, had felt it necessary to rise to his own self-generated, self-inflated Shakespearean occasion.

In short, in his response to Shakespeare’s greatness, he seemed all but obligated to become a poet and a rhetorician in his own right. Call it Shakespeare envy if you like… The fact is that, when you approach a mountain the size of Shakespeare’s, you just have to measure up!
And therein lies a big, big problem which has never gone away, and is not likely to go away any time soon.

Not only for poets and we poor, creeping prosers either, but also for artists. Shakespeare is too high for we creatives. He dazzles too much. His example is too brilliantly singular and unsurpassable. He not only represents a kind of acme for poets. He leaves many poets with a sense of hopelessness because the best that any poet could do has been done already. By Shakespeare.

What is more, he cannot easily be learnt from because he is too much of himself. He is not so much a point of departure as an end point. In short, the show’s over, lads and lasses all.

How different things seem out in the wider world! If you were to tell an engineer or a metallurgist that a designer of a saloon car from way back when could never be beaten, he would laugh in your face. He would tell you about new materials, new technologies, and other kinds of wizardry of our passing moment.

But this cannot be so with Shakespeare because he is manipulating the common currency of an old language, which changes enough but not overmuch, and his concerns are of an urgent and abiding interest: murder, treachery, vanity, jealousy, ambition, etc., etc. In short: the stuff of all human life.

Artists have found it quite tough going with Shakespeare, too. Many paintings after Shakespeare feel mawkish or literal-minded, flat-footed or lacking in emotional depth when set beside the bard’s soaring language.

It is as if the kind of psychological complexity and linguistic density in which Shakespeare specializes simply cannot be seized in images. Artists have too often given us stiff visual pageantry, overwrought emotion, over-the-top theatricality, or mere documentation. Good works of art have emerged from the plays, but very few.
Generally speaking, the comedies have been easier to deal with than the tragedies. Easiest of all is A Midsummer Night’s Dream, which is a visualizable gift. The Irish painter Daniel Maclise shows us Bottom waking up from his dream in “The Disenchantment of Bottom” (1832), for example. The entire fantastical scene swirls with imagery, as Bottom, jolting into wakefulness at its center, rudely stretches and yawns.

A few other successes come to mind. Think of Johan Zoffany’s “Thomas King as Touchstone in ‘As You Like It’” (1780), depicting the court jester in one of Shakespeare’s delightfully intricate, shape-shifting, gender-melding comedies, or John Everett Millais’s “Ophelia” (1851–1852) from Hamlet.

Touchstone, played in the painting by the actor Thomas King, feels like the direct transcription of a live performance that happened on the London stage in the 18th century. It is light of touch, a piece of visual bedazzlement that seems to erupt into life in front of us.

The parti-striped costuming beguiles quite as much as the pose and the poise of the actor himself. Touchstone steps in from the wings in his ass’s ears, ripe for tomfoolery, looking every inch the fool, the mocker, the prankster…

Millais, a member of the Pre-Raphaelite Brotherhood, and the man who stole Ruskin’s wife from under his extremely discerning art-critical nose, makes a good attempt with Ophelia. And yet we also ask ourselves: how much of the predicament of the character in that play has this painting brought over?

We admire the brilliant intricacy of the painting, of course, its sheer, painstaking attention to natural detail. But is it really much more than yet another example of the kind of costume-drama faux-historicism that the Pre-Raphaelites specialized in? We feel such pity for the ordeal of the 19-year-old model, Lizzie Siddall, having to lie in a bathtub of water for so long. Did she wish that she were still working in a hat shop? No wonder she caught a bad cold.

Fortunately, Millais, being chivalrous and male, agreed to settle the doctor’s bills, of which there were 50. Lizzie survived.