A FASCIST MESSAGING OF THE TRUMP CAMPAIGN EAGLE

Trump and his surrogates have repeatedly and blatantly integrated fascist aesthetics into the campaign. This T-shirt design is only the latest example. 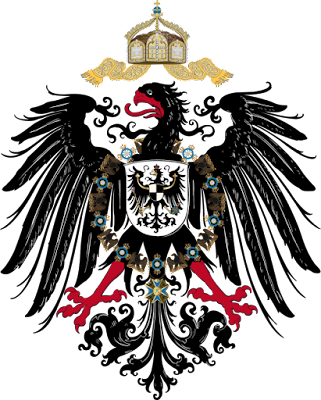 What’s in an eagle? This is a question many have been asking since the Donald Trump campaign began selling an “America First” T-shirt emblazoned with an eagle icon that very closely resembles the one used by Nazi Germany. While intent for the choice of this image may be unclear, in the context of recent rhetoric by the administration and its supporters, there is reason for concern. The circumstantial evidence piling up strongly suggests that individuals within the administration and the Trump 2020 campaign are amplifying white supremacist and fascist messaging. Consider that:

The campaign slogan itself, “America First,” is a nativist and racist slogan which the Ku Klux Klan tried to copyright.
Trump’s senior political advisor, Stephen Miller, has been called “the true driving force behind this Administration’s racist agenda.” Indeed, leaked emails from Miller highlighted his white nationalist beliefs.
The Trump campaign used a concentration camp symbol in a fundraising ad (an act historian Mark Bray called a “death threat against leftists”).
That same ad was posted 88 times and the first sentence had 14 words. (Both 88 and 14 have significance in the neo-Nazi and white supremacist movements.)
During the July 3rd Trump campaign rally, he stood in front of 14 US flags and referred to the threat of “far-left fascism.”

Trump himself retweeted a video where a supporter shouted “White Power” in the first 20 seconds.

During its first campaign, Trump’s staff posted an altered photo of opponent Hillary Clinton which originated on an alt-right website.
After the deadly “Unite the Right” rally in Charlottesville, Virginia, Trump suggested that there were “good people on both sides” — when one of those sides was made up entirely of neo-Nazis and white supremacists.

Recently, a Congressman Matt Gaetz (R-FL) alluded to the “Jews will not replace us” chant from the Charlottesville rally when he said “we will not allow someone to replace [America]”; the president’s son, Eric Trump, promoted the right-wing QAnon conspiracy; and a leading GOP candidate for Congress has drawn criticism from fellow Republicans for a series of racist, antisemitic, and Islamophobic statements.
This brings us back to the campaign’s use of this particular eagle. The eagle rousant (eagle rising) is, of course, not unique to the Nazis or to the United States for that matter. The Romans used the eagles (Aguila) as the figurehead for their military standards. Almost every empire and country has used one in its heraldry at some time or another. In heraldic custom, the eagle faces to its own right (viewer’s left). What makes this use by the Trump campaign problematic is the specific choice of depicting an eagle facing to the viewer’s right. 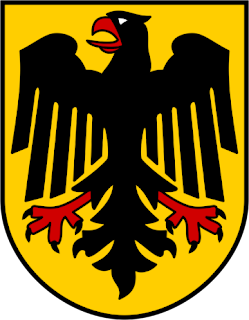 The origin of the eagle symbol lies in the Holy Roman Empire, during the 10th century, whose rule was represented by the Reichsadler (Imperial Eagle). It evolved into a double-headed eagle, and then a single-headed form became the symbol of the German empire (Second Reich) in 1871. After Germany’s defeat in World War I, the fledgling Weimar Republic democracy sought a new symbol that compromised with both the conservative past and the hopeful liberal present, in an attempt to unify a deeply divided country.

On November 11, 1919, exactly one year after the end of the war, the first President of the Republic, Friedrich Ebert, issued a proclamation declaring the Reichsadler to be the official symbol, combined with the new Weimar colors. This marked the beginning of a very real “flag dispute.” Marketing consultant Hans Domizlaff claimed the right design was critical to moving past the “disastrous spiritual disunity of the German people.” Ebert placed responsibility for design of the emblem itself with the government’s official artistic office, the Reichskunstwart, under Edwin Redslob. Redslob sought designs, including a promising one by Expressionist artist Karl Schmidt-Rottluff. Though this design was unanimously approved, Redslob opted for a more traditional version. The new emblem received instant criticism from conservative corners who disliked its modernist appearance. In 1920, right-wing magazine Rote Hand mocked the new symbol in a cartoon. An upstart politician named Adolf Hitler called the new eagle a “Jewish bankruptcy vulture” and symbolic of the what an “abomination” the new nation was.
Thus, it comes as no surprise that Hitler ensured the eagle would be changed at the birth of the Third Reich. The new symbol of Nazi Germany was a brutalist, stylized emblem clutching a wreath with a swastika in it. Importantly, when used as the official emblem of the Nazi Party, known as the Parteiadler (Party Eagle), the eagle’s head was turned to its left, ostensibly facing to the East, the “geographic target of the movement.” The same emblem with the head facing right was used throughout the Reich. The German army adopted the Parteiadler shortly after, and both versions figured prominently on all manner of Nazi flags, awards, and other paraphernalia. This symbol, which during Weimar was intended to unify, watched over the Holocaust and crimes against humanity across Europe.

None other than President Harry S. Truman found the details of this eagle critically important and ordered a change to the seal of the president of the United States. He followed the advice of Army chief of Heraldry Arthur E. Dubois to depict the eagle facing to its right (our left). This was more than return to heraldic orthodoxy. President Truman told reporters in 1945 that “This new flag faces the eagle toward the staff, “which is looking to the front all the time when you are on the march, and also has him looking at the olive branch for peace, instead of the arrows for war.” This long discussion of the iconography of the eagle provides an important context to the deeper (and explicit) meanings behind the images which brings us back to the Trump campaign eagle. 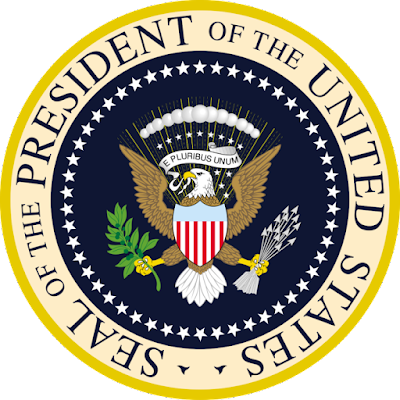 Official Seal of the President of the United States, 1945–present (image via Wikimedia Commons)

The Trump campaign had plenty of images to choose from — a search on Shutterstock for “American Eagle” yields almost 70,000 results, whereas “US eagle” yields 7,200 and “Patriotic Eagle” 26,500. However, the campaign chose the only emblem facing to its left, like the Nazi version. This form of the eagle is used by neo-Nazis and a modified version is used by the “Nazi Lowriders,” a gang associated with the neo-Nazi Aryan Brotherhood.

Walter Benjamin wrote amidst the turmoil of the Third Reich, that “the logical result of Fascism is the introduction of aesthetics into political life.” Trump and his surrogates have repeatedly and blatantly integrated fascist aesthetics and messaging into the administration and the campaign. This T-shirt design is only the latest example. Any of the instances mentioned here by themselves could have been written off as a gaffe or a coincidence. However, given the accumulation of “coincidences,” alternative explanations become far more plausible: Trump and his backers are either aping a fascist aesthetic out of admiration or as a not-so-subtle nod to the most extreme elements of the right (or both).

Steven Heller is a scholar of graphic design; he is also the author of The Swastika and Symbols of Hate: Extremist Iconography Today and Iron Fists: Branding the 20th-Century Totalitarian State. When I asked him what he made of the choice of the eagle for Trump’s T-shirt design, he told me, “I find it hard to believe that the direction of the eagle’s head (mandated by Harry Truman) was flaunted by Trump’s designers without knowing the symbolism … But his gang know what they’re doing. They understand the force of well-staged performance, props and all. So, my belief is that this eagle is indeed a nod (a secret handshake, so to speak) between Trump and racist America.” As others have observed, Trump keeps showing us who he is. When will we start taking him at his word?

Correction: A previous version of this article attributed a Walter Benjamin quote to the incorrect date of 1955. We apologize for the error which has been amended.