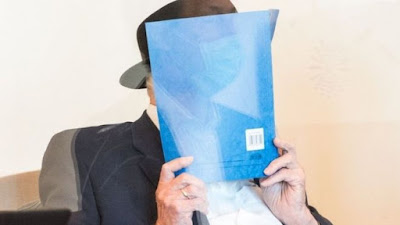 A 93-year-old former Nazi SS concentration camp guard has been found guilty of complicity in the murder of more than 5,000 prisoners.

Bruno Dey was handed a two-year suspended prison sentence by a court in the German city of Hamburg.

Dey had manned a tower at the Stutthof Camp in what was then occupied Poland.

It is expected to be one of the last Nazi-era trials, as both survivors and perpetrators are now very old, and in some cases their memories are failing.

Dey was tried in a juvenile court because he was 17 at the time the atrocities were carried out, between August 1944 and April 1945, according to the indictment.

Apology for 'the hell of this madness'
During the nine-month trial, Dey listened to witness statements but maintained he had been forced into his role as a guard at the camp and had not been involved in the killings.

In his last statement to the court, he said he had been "shaken" by the witness accounts and apologised to "those who went through the hell of this madness". However, he added that he had not been aware of the "extent of the atrocities" until the trial.

Sentencing Dey, the judge acknowledged his willingness to take part in the trial but said he had refused to acknowledge his own complicity in what was going on. "You saw yourself as an observer," the judge said.

Ex-SS guard tells trial 'I want to forget'
The hidden graves of the Holocaust
How Auschwitz became centre of Nazi Holocaust
The trial in January heard from a historian who testified that Dey had been sent to the camp initially as a Wehrmacht soldier and had not joined the SS until September 1944. So, it was argued, he could have asked for a transfer to another unit before becoming part of the SS mass murder machine.

Although Dey acknowledged knowing of the Stutthof gas chambers and admitted seeing "emaciated figures, people who had suffered", his defence team argued that he was a relatively unimportant figure in the camp and was not directly involved in the 5,230 deaths.

But prosecutors argued he had known what was happening, had had contact with the prisoners and had actively prevented their escape.

"When you are a part of mass-murder machinery, it is not enough to look away," prosecutor Lars Mahnke said in his closing arguments.
Stutthof, located near modern-day Gdansk, was officially designated a concentration camp in 1942. It was the first such camp built outside German borders in the war and the last to be liberated, by the Soviet army on 9 May 1945.

Guards began using gas chambers there in June 1944. More than 65,000 people are thought to have died in the camp, from illness and malnutrition as well as from the gas chambers and other executions.

Dey's was one of several war crimes investigations that were considered by the German authorities after a landmark 2011 ruling against former Sobibor camp guard John Demjanjuk. He was given a jail term as an accessory to mass murder but died pending an appeal.