HOW WE LEARNED FROM MARY TRUMP'S DAMNING PORTRAIT OF HER UNCLE

By Kevin Liptak
Washington (CNN)Seeking to prevent nothing less than the "end of American democracy," Donald Trump's niece Mary lays out a long and twisted saga of mind games and family drama in a new book her family attempted to block.

"Too Much and Never Enough: How My Family Created the World's Most Dangerous Man" presents a damning portrait of the President and seeks to explain his most destructive traits as facets of a dysfunctional upbringing and a domineering father. CNN obtained a copy of the book on Tuesday.
Mary Trump, a licensed clinical psychologist, is open in her disapproval of her uncle's policies but also uses her knowledge of his childhood to paint a broader portrait of the man who became president.
The White House on Tuesday rejected most of her claims, and other members of the Trump family had attempted to prevent the book's publication, citing a non-disclosure agreement she signed during a dispute over her grandfather's will.
Here are some key takeaways from the book: 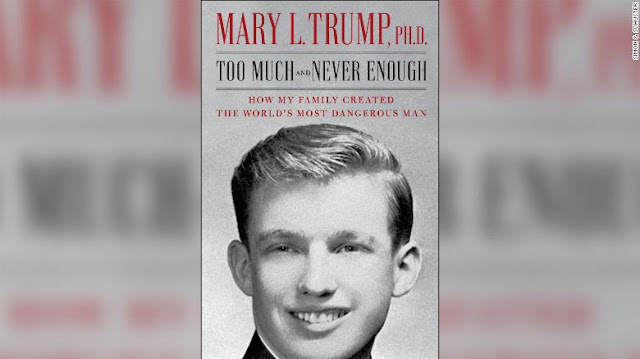 Cruel and unfeeling
Central to Mary Trump's book is the downfall of her father, Fred Trump Jr., whose decline into depression and alcoholism was met with apparent disinterest by other members of her family. The culture of cruelty -- both casual and systematic -- continues to inform now-President Donald Trump's approach, she argues.
She describes her father's death from a heart attack at age 42 as a regretful episode that illustrated the dysfunctional family dynamics of her grandfather and uncle.
Despite having long-standing financial ties to nearby hospitals -- including a whole wing named for the Trump family at Jamaica Hospital -- no one sought medical help for her father, who had suffered from alcoholism and a faulty heart valve, for weeks as he was ailing in their family home.

"A single phone call would have guaranteed the best treatment for their son at either facility. No call was made," she writes.
When he did eventually get taken in an ambulance to the hospital, he went alone. Despite grave updates on his health, none of his family members went to be with him. Instead, she writes, Donald Trump and his sister Elizabeth went to the movies.
After Fred Jr.'s death, Mary Trump advocated for his ashes to be spread in Montauk instead of buried, a wish she said her father had voiced loudly when alive. But her grandfather refused, associating the wish with his son's passions for boating and fishing of which he disapproved. Instead, his ashes were buried in a family plot.