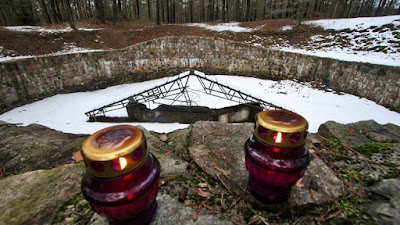 The PANERIAI memorial in memory of the 70000 Jews of Vilnius and its environs killed by Nazis and their accomplices during World War II, is pictured in Vilnius on February 16,   -   Copyright  Petras Malukas / AFP

In 2011, a Polish historian, Jan Grabowski, published an explosive account of the actions of Polish citizens during the Holocaust, focusing on the community of Dabrowa Tarnowska, where Jewish Poles were hunted down and murdered by their Polish neighbours.

The book provoked a firestorm in his native country and almost a decade later Grabowski - a history professor at the University of Ottawa - remains embroiled in legal challenges.

In 2018 he sued the Polish League Against Defamation for libel, after it accused him of exaggerating the number of Jews that were killed by Poles during the Nazi occupation.

Poland’s right-wing Law and Justice Party has long leveraged what critics have called “the politics of memory” in its attempt to attract a nationalist base.

At the centre of this argument has been that it was the Nazis that murdered three million Polish Jews during World War II, not the Poles. That Poles were victims of the Holocaust, not perpetrators.

In March 2018, the country passed a law that made it a crime to falsely accuse the Polish nation of war crimes committed by Nazi Germany, explicitly outlawing use of the term “Polish death camps” when referring to concentration camps located in occupied Poland.
Historians like Grabowski refer to the attempt to rewrite what occurred during World War Two as “Holocaust distortion”, and argue that it is more dangerous than outright Holocaust denial.

“Its major selling point is that it delivers the message what people want to hear: the Holocaust happened, but my nation, group, tribe, had nothing to do with it,” he said.

Grabowski puts the number of Jews killed by Poles - or denounced or delivered to the Germans and later killed by the Nazis - at as many as 200,000. Jerusalem based Holocaust research centre Yad Vashem puts the number at between 130,000 and 180,000. All the numbers are, of course, rough estimates.

'This story has never been told'
Grabowski is not the first Polish historian to challenge this narrative. In Poland in 2001, a ground-breaking book by historian Jan T Gross - titled ‘Neighbours: The Destruction of the Jewish Community in Jedwabne, Poland' - alleges the murder of 340 Polish Jews by local villagers, who, Gross states, locked men, women and children in a barn and burned them alive.

“In my work, I stress that the plan of the genocide was a German one but without local enablers and facilitators the Germans would not have been as “efficient” as they were,” says Grabowski. “This part of the story has never been told, in the Polish context, and we – historians of the Shoah – owe it to the victims and to the present readers alike.”

Poland is not alone in having to come to terms with what happened during the Nazi occupation of eastern Europe - and the role of its soldiers, citizens and officials in it.

Of the six million Jews murdered during the Holocaust, the vast majority - over 5.7m, according to Yad Vashem - were killed outside Germany’s borders. That includes 1.1m in the Soviet Union, 569,000 in Hungary and a staggering 3m in Poland, where some of the Nazis most infamous death camps - Auschwitz-Birkenau among them - were located.
Yad Vashem estimates that half of Jews killed in the Holocaust died in extermination camps run by the SS, while at least a quarter were shot by the Nazi Einsatzgruppen - mobile death squads - as well as their accomplices, SS brigades, police formations, units and soldiers.

That at least some of these accomplices were not German but local residents of countries occupied by the Nazis is uncomfortable - but it is nevertheless a fact, says Yad Vashem.

“In all stages of the murder many non-German civilians voluntarily participated in the killing operations,” it said.

Culpability
For many nations, the question of culpability has been a difficult pill to swallow. After 1945, much of eastern Europe was subsumed by the Soviet Union, which discouraged focus on the Nazi genocide as uniquely Jewish tragedy. It was only when the Berlin Wall fell that historians were able to gauge the true scale of the atrocities committed in Eastern Europe.

It was 2004 before Romania recognised that its soldiers had been involved in the deportation and murder of Jews - supervised by the Nazi SS - during WW2.

“The terrible tragedy of the Holocaust was possible due to the complicity of top state institutions—secret services, army, police, et cetera,” President Ion Iliescu said at the time.

“There is [...] no excuse for those who cynically and cold-bloodedly sent their fellow citizens to death, who discriminated, humiliated, and excluded them from society.”

It was 2014 before the Hungarian government - via its ambassador to the UN - took responsibility for the mass deportations of Jews to death camps in 1944, carried out by Hungarian officers supervised by the Nazi SS.
Others, like Poland and Lithuania - where 95% of the country’s 250,000-strong Jewish community was wiped out during the Holocaust - have been more reluctant to do so.

Writing this week in Politico, Polish Prime Minister Mateusz Morawiecki, argued that rather than being perpetrators in Nazi crimes during World War Two, Poles created underground organisations to help Jews and many were sent to death for doing so. “Renewed attempts to paint Poland as a perpetrator, rather than a victim, can’t be tolerated,” he wrote.

In Lithuania, a government lawmaker in the ruling party announced last month that he is drafting legislation that will declare that neither Lithuania’s government nor its citizens were involved in the Holocaust. The government has also been active in canonising nationalist leaders that Jewish groups claim are linked to WW2-era atrocities.

Lithuania’s Adolfas Ramanauskas-Vanagas, who fought the Soviets from 1945 until his execution in 1952 has been branded a national hero by the present government, but the Simon Wiesenthal Centre says he was head of a vigilante gang that persecuted Jews. 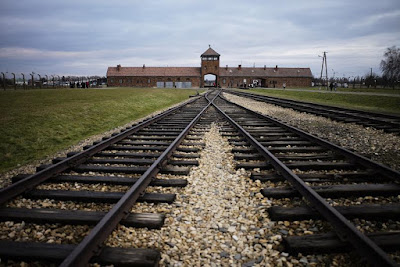 World War II leader Juozas Ambrazevicius was reburied in a ceremony in Kaunas. Ambrazevicius, who went to the US after the war, has been linked to the deaths of thousands of Jews and the ceremony led to criticism from Lithuania's Jewish community.

Lithuanian and Polish government spokespeople did not respond to requests for comment by Euronews last week.

In 2016, a memoir by Rūta Vanagaitė entitled Our People provoked a debate about the extent to which Lithuanians were complicit in the murder of Jews. Vanagaite found out that her grandfather, a civil servant, drew up a list of 11 “undesirables” - all of them Jews - that were later executed. Her aunt’s husband was a chief of police during the Nazi occupation.

What has further complicated the landscape for historians like Gross, Vanagaitė and Grabowski working in the field has been recent statements by Russian President Vladimir Putin, who has been engaged in a very public spat with eastern European leaders about the role of Poland in particular in the outbreak of World War II.

In recent weeks, Putin has thrown gasoline on the fire in his repeated claims that Poland was responsible for World War II and helped the Germans deport Jews.

Anyone who writes anything critical is accused of being a Russian agent.

Jan Grabowski
Historian
Poland’s President Andrzej Duda last week boycotted a ceremony to mark the liberation of the Nazi death camps at Auschwitz because he was refused permission to speak by the organisers. Duda had argued that he should have the right to reply to Putin

Putin’s comments come after the European Parliament passed a resolution blaming the Nazi-Soviet pact - the 1939 agreement between Nazi leader Adolf Hitler and Joseph Stalin to carve up Poland and the Baltic states between them - for the outbreak of the war.

Putin counters that the Soviet Union had little choice to sign an accord with the Nazis after repeated efforts by Britain and France to appease Hitler during the 1930s, including the Munich Accords in 1938 that allowed the Nazis to annex Czechoslovakia.

In 1941, Hitler broke his pact with Stalin and invaded the USSR, bringing the Soviets into the war. Despite early Nazi gains, the Red Army eventually turned the tide of the conflict, liberating most of eastern Europe and eventually invading and occupying Berlin.

But Putin says that European leaders “want to shift the blame for unleashing World War II from the Nazis to Communists” in an effort to sideline Russia.

The involvement of Russia in the “debate”, says Grabowski, has made life even more difficult for historians not willing to peddle the government narrative about World War II.

“Anyone who writes anything critical is accused of being a Russian agent.” he says.