SOMETHING SPECIAL, A BOOK," TELL ME A RIDDLE" BY TILLIE OLSEN.

TELL ME A RIDDLE, a Collection, by Tillie Olsen. J. B. Lippincott Co., Keystone Books (paperback), Philadelphia and New York: 1960, 61, 156 pp., $1.65.
By Kathie Amatniek
It is particularly exciting to find a writer who can understand as individuals the people we know from the writers of the thirties as types: ghetto intellectuals, Depression unemployed, and third generation Americans. Tillie Olsen, the San Franciscan whose short story "Tell Me a Riddle" won the 1961 O. Henry prize, is of a later generation of writers. She was too young during the Depression to view the people she knew as victims of injustice and the circumstances they lived in as categories fitting into ideological formulae, as did the "proletarian" writers who were adults at the time. To her they were simply real people suffering their own personal hopes and frustrations. 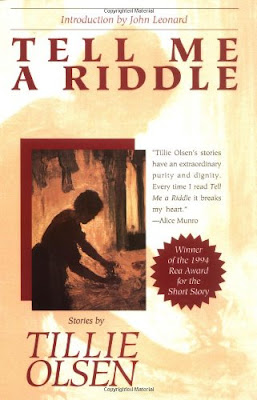 This is not to say that Tillie Olsen neglects the social vision with which her characters live; certainly it is with the stuff that dreams are made of that she deals and the sadness of disillusionment, the failing communication of these dreams between generations and the double legacy of hope and resentment. But her chief concern is always the person, not the idea.

The last short story and the one that bears the title of the book is by far the best in the collection. All of Tillie Olsen's work (as of now, four published short stories) involves to some extent fading ideals and filial misunderstanding; "Tell Me a Riddle" provides supreme poetic expression of this theme.

In it, an old woman, whose children are grown and husband retired, has finally the opportunity to live her own life that she has buried all these years in caring for her home. But she finds herself alienated from her husband, who has changed, from her children, with whom she has nothing in common. For this immigrant Jew, veteran and refugee of the 1905 Russian Revolution, still believes in the dream of her youth ("These things shall be, a loftier race than e'er the world hath known shall rise ...") while her husband who once shared this with her can only look forward, and eagerly, to the passive, well-fed life of an Old Age Haven.

The old woman is dying of cancer and, at this time, when she most wants to be alone with her thoughts, away from a world which has most of the material structure and none of the spirit of her dream, her children, in a misguided effort to cheer her up, take her on whirlwind visits of scattered relatives. They are hurt by her resentment that they cannot understand for they have never had what their father has forgotten and mother still believes.

The story is gripping. It builds with sequences, flashbacks, and interjected dialogue until the final scene, when the husband understands his own sad metamorphosis and his wife's idealistic strength. Tillie Olsen's style is highly individual in a sense impressionistic. It is almost as if the sensitiveness of a child's reactions and insights were sifting through a loose filter of adult experience.

In another of her short stories, "Hey Sailor, What Ship," the naturalness of the style is equally successful, but this time is it an aging mariner who is caught between dream and reality. The landlubber friends of his childhood nurse the old dreams of his glory--of freedom and roving and life on the open seas. Few illusions remain for the seaman himself. But when the adolescent daughter of his two friends fails to remember his lost grandeur, the old sailor is lost. This innocent cruelty is his final ruin.

"O Yes" and "I Stand Here Ironing" are fairly good short stories, but neither approaches the power of the other two. Again the concern is with resentment between generations and unfulfilled expectations. But in these, which probably relate more directly to her own life, Miss Olsen's unique style, so powerful elsewhere, seems contrived; Nonetheless, they are both moving and certainly well worth an hour of exam period procrastination. "Tell Me a Riddle" alone makes of Tillie Olsen a superb short story writer.