CELEBRATING THE HISTORY OF PARISIAN COUTURE

Paris, Capital of Fashion at the Museum at FIT is a comprehensive visual compendium that can help audiences understand how fashion became foundational to the identity of the city. 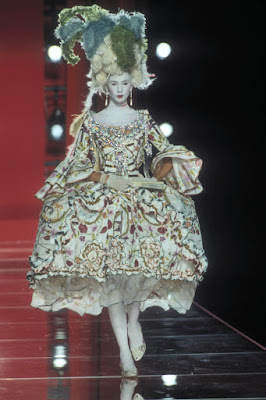 When walking into Paris, Capital of Fashion, currently on view at The Museum at FIT, I feared an experience of bells, whistles, and fawning over France’s supremacy in the spheres of fashion and culture. Thankfully, I was wrong.

Spread between two galleries Paris, Capital of Fashion, thoughtfully curated by Dr. Valerie Steele, traces the ascent of French fashion and its subsequent preeminence for the past five centuries (although though the majority of the examples date from the late 19th and 20th century). The first gallery analyzes the impact of Paris in a global fashion market and its ongoing interaction with — and, as the exhibition brochure states, “soft power” over — other fashion capitals. The main gallery, by contrast, is a pure celebration of Parisian couture.

Of course, the exhibition is full of pretty and frilly things, as Steele emphasizes how it all started at Versailles. Entering a secluded, sanctum-like section of the main gallery, which feels like a Sofia Coppola or Baz Luhrmann movie, we witness the legacy of the French royal court in fashion and fashion-adjacent visual culture. The few Versailles-era garments (a dress, a corset) are accompanied by costume designs from the 1930s, courtier-inspired women’s suits by Nicolas Ghesquiere, and one garment by John Galliano for Dior’s Autumn/Winter 2000-2001 collection; titled “Freud or Fetish,” the collection was influenced by excess and fetishism, which included a wink to the French aristocracy in its prime and its downfall. 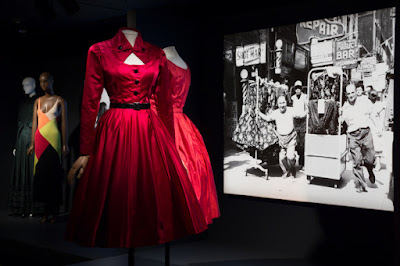 Spread across the sections including “The Cult of the Designer” and “Fashion, Art, Luxury” are what come closest to real-life Disney princess ballgowns: a 1866-67 creation designed by Charles Frederick Worth; a scarlet evening cape by Gabrielle “Coco” Chanel from 1927; a Grecian goddess-style ivory silk jersey gown circa 1945 by Madame Grès; and two Christian Dior creations from the 1950s, a black minimalist gown from Dior’s famous 1955 Y-line and a pale blue ballgown adorned with pink flower buds.

However, the garments in Paris, Capital of Fashion do not all conjure an image of ivory tower luxury. Beginning in the late 1800s with Charles Worth, Paris managed to remain a “capital of fashion” thanks to the influx of foreign-born and immigrant designers. Jewish-Egyptian immigrant Gaby Aghion, who founded Chloe in 1952, pioneered what she called “luxury pret-à-porter” — fine ready-to-wear fashion. Her label became iconic under such creative directors as German-born Karl Lagerfeld and, later, British designers Stella McCartney and Phoebe Philo. Modernist designer Bouchra Jarrar, who worked for Balenciaga, Lacroix, and Lanvin prior to founding her own label, combines high fashion with function; the show features a beaded top adorned with rooster feathers, worn with plain white trousers....................