Hong Kong protesters are remixing the Christmas card tradition under the #freehkxmascard hashtag and decorating cards with memes and slogans from the ongoing movement.
Jason Li 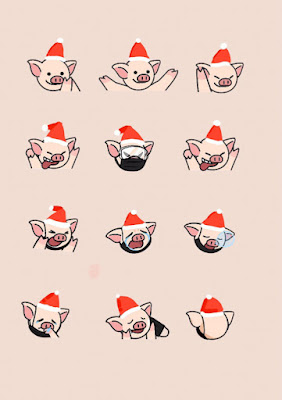 The many faces of the Santa Claus x LiPig crossover. (Courtesy of Freehkxmascard.)

Christmas in Hong Kong is usually a snow-themed celebration of consumerism. Shopping malls go all out to decorate their atriums and plazas with, say, Thanksgiving Parade-sized Snoopy statues or Pokémon-filled plastic cottages, while office building dress themselves up with intricate lighting displays. It is a wholly secular affair, with nary a nativity scene to be found, all in service to the only holiday activity that matters: shopping. At least, that was the story until now. This Christmas, Hong Kong’s protesters are rebranding Christmas as a celebration of peace, freedom, and democracy.

As the protest movement against police brutality, eroding democratic rights, and a belatedly-withdrawn extradition bill moves into its seventh month, protesters are hijacking the Christmas card tradition under the #freehkxmascard hashtag. Instead of saccharine (and secular) messages of peace and joy, people are branding their cards with the memes and slogans from the ongoing movement. The bilingual card design below, for example, asks Santa for help with the movement’s five demands. Other cards carry similar messages — one directed towards folks overseas includes a “simple” Christmas wish: “to be able to breathe the air of freedom along with you all.” 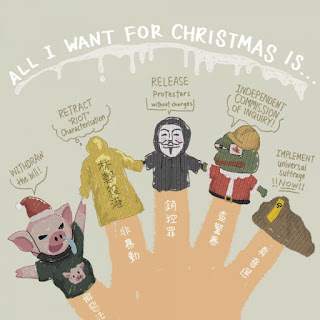 “All I Want for Christmas Is … ” (Courtesy of BeWater HK.)

Many card designs prominently feature protest mascots LiPig and Pepe the Frog with Christmas hats. The former, also known as LIHKG Pig, is based on a year-of-the-pig emoticon from LIHKG, a forum hailed as one of two digital organizing platforms of the movement. The latter, in Hong Kong, is “just a Hello Kitty-like character” detached from its American roots that has been picked up by protesters for its cynical sneers and funny faces. The two animals have both become enduring symbols of the protest, and their Santa costume is but one of the many forms they have taken over the past six months.

In the image above, each finger puppet references a specific protest meme: LiPig; a yellow raincoat to commemorate the first death related to the movement; Guy Fawkes, a perennial symbol of revolution; Pepe (Hong Kong edition); and Lion Rock, an iconic mountain where activists hung a giant yellow banner demanding universal suffrage in 2014………….