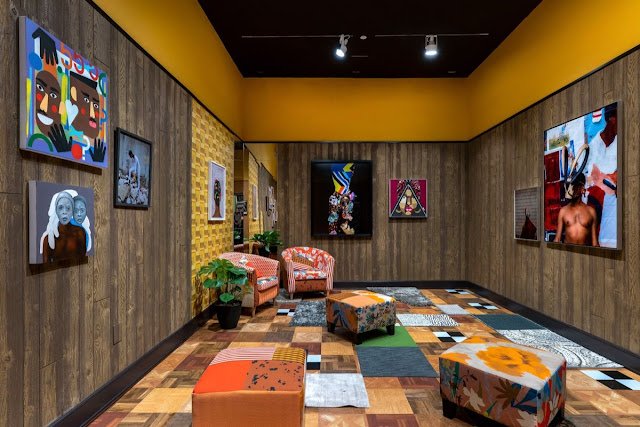 When artist Mickalene Thomas was a child in New Jersey, her mother, model Sandra Bush, threw parties and produced local plays with friends to raise money for charitable causes. “They were always creating community,” Thomas recalled. After her mother passed away in 2012, Thomas found one of the old scripts in Bush’s home. The play was titled Put a Little Sugar in My Bowl—a nod to the 1967 Nina Simone song “I Want a Little Sugar in My Bowl.” As Thomas remembers it, the story “was about a group of friends surviving and coming together, this collective experience.”

For her new show “Better Nights,” at The Bass in Miami Beach, Thomas wanted to generate a similarly communal environment. Using her mother’s old Polaroids as inspiration, Thomas created an altogether celebratory experience. She promotes the work of fellow artists and offers a sprawling, multi-room installation where audiences can convene for performances and events. The exhibition simultaneously complements and diverges from Miami’s glitzy, action-packed, selfie-loving Art Week.

The show, which runs through September 2020, opens with a room featuring a checkered floor, faux wood paneling, and furniture upholstered with vibrant, mismatched patterns. The 1970s aesthetic will be familiar for Thomas’s fans—throughout her career, the artist has created photographs and rhinestone-studded paintings that nod to the decade that defined her childhood.

Paintings and photographs by artists including Derrick Adams, Nina Chanel Abney, Xaviera Simmons, Lyle Ashton Harris, and Paul Mpagi Sepuya line the walls. As she shares the spotlight with her friends and peers, Thomas promotes a vision of artmaking that relishes in solidarity and collaboration instead of tired notions of the single lone genius, toiling away in the studio to his sole benefit. The artist said she aims to create “a platform of agency and visibility for other artists.”
Portraits of African American subjects abound, like family pictures lining a living room. The overall effect is of camaraderie and homeyness. Discussing her unifying curatorial themes, Thomas noted that many of the works deal with “the black body in relationship to ‘masking’”—whether that means putting on make-up and clothing, or thinking about identity and artificial gender binaries. Harris literally covers his subjects’ faceswith masksin his photographs, while Sepuya obscures them with his camera and its flash.
Next door, in a darkened theater, a selection of video works that Thomas co-curated with Jasmine Wahi—by Ja’Tovia Gary, Christie Neptune, Devin N. Morris, and Brontez Purnell—play on loop. The final and most spectacular room features mirrored walls, dim lighting, hanging plants, sleek black couches, a turntable, and a bar. Thomas’s Swarovski crystal mirrors are scattered among the panes. Clearly, this is where the party happens.
“It reminds me of the Mercury Lounge,” Thomas said, referencing the Manhattan indie nightclub that opened in 1993. She’s lined up a series of musical evening performances to take place throughout the run of the exhibition, attempting to diminish the hierarchy between viewer and musician as she encourages them to share the compact space. This week, audiences have grooved into the wee hours, as the museum welcomes revelers as late as 2 a.m.
“What interested me in ‘Better Nights,’” said Bass director Silvia Cubiñá, was “how people’s participation could really change the work.” As visitors have danced, nightly, in the mirrored room, she’s witnessed a “mutual performance,” with the museumgoers responding to the artists at the turntable. 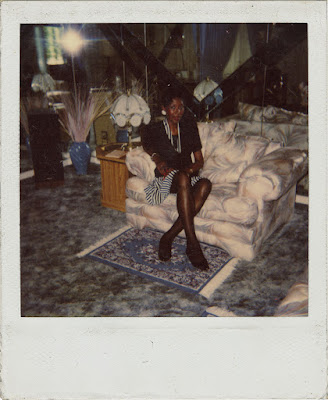 Thomas mounted her first iteration of this work, titled “Better Days,” in 2013 at Galerie Volkhaus in Basel, Switzerland, during Art Basel. Solange sang and auctioneer Simon de Pury DJ-ed. Thomas designed her own cocktails and punches, inspired by house party tipples and her mother’s favorite drinks. This past November, the artist opened a major presentation at the Baltimore Museum of Art, which similarly plunges viewers in her retro aesthetic and features works by eight artists with their own ties to the city.
Art Basel in Miami Beach inspired Cubiñá to stage the newest iteration of Thomas’s immersive work. “The context is commercial and a lot of objects in one city,” she said. “How do you work with that on a psychological and emotional level with the visitors?” Located off Collins Avenue, where parties rage at the city’s ritziest hotels, “Better Nights” takes a more thoughtful approach to spectacle and festivities. Thomas’s sumptuous settings are as seductive as any venue in Miami Beach. Yet once you sink into one of the armchairs, you’re part of the artist’s own social practice. Day or night, partying or merely museum-hopping, visitors are integral to the art. According to Cubiñá, “when the performers are done, there’s this continuation of movement and people—and joy.”
Alina Cohen is a Staff Writer at Artsy.