THE CONDUCTOR TEODOR CURRENTZIS, APPEARING AT THE SALZBURG FESTIVAL THIS SUMMER, HAS BEEN DENOUNCED FOR HIS TIES TO RUSSIA AND HIS SILENCE ON ITS WAR IN UKRAINE.CREDIT...MARCO BORRELLI

SALZBURG, Austria — Teodor Currentzis is revered as one of classical music’s most original voices, a rebellious conductor who can breathe fresh life into well-known works. In this European cultural capital, where artists, agents and impresarios gather each summer, he is omnipresent, his name emblazoned on banners and brochures. His fans travel from around the world to hear his performances. 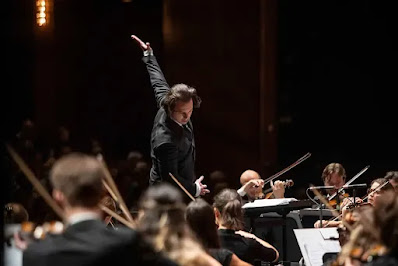 The conductor Teodor Currentzis, appearing at the Salzburg Festival this summer, has been denounced for his ties to Russia and his silence on its war in Ukraine.Credit...Marco Borrelli

But this summer, it is not just his music that is the talk of the Salzburg Festival, one of classical music’s premier events. Currentzis — who is conducting a new double bill of Bartok’s “Bluebeard’s Castle” and Carl Orff’s “De Temporum Fine Comoedia” here beginning Tuesday — and his ensemble, MusicAeterna, are drawing attention for another reason: their ties to Russia.

Amid the war in Ukraine, Currentzis and MusicAeterna have been assailed for their reliance on VTB Bank, a state-owned Russian institution that has been sanctioned by the United States and other countries but remains the ensemble’s main sponsor. Currentzis and the ensemble have been denounced for their silence on the war and criticized for working with associates of President Vladimir V. Putin of Russia, including some who sit on the board of MusicAeterna’s foundation.

This scrutiny has complicated the career of Currentzis, one of the industry’s most in-demand stars. And it has rattled the 102-year-old Salzburg Festival, whose leaders have stood by MusicAeterna even as it has been shunned by other cultural groups.

“It’s not that I’m a coward; it’s so sensitive,” Markus Hinterhäuser, the festival’s artistic director, said in an interview. “We are not for Putin. There is absolutely nothing to discuss about that.”

Currentzis and his musicians are now at the center of a debate about how cultural groups should handle artists linked to Russian institutions. Many have cut ties with close associates of Putin, such as the conductor Valery Gergiev, a longtime friend and prominent supporter of the Russian president, who was once a fixture at the Salzburg Festival………….